Lindsey has been in a math "class" at her preschool for most of this school year. They actually have them adding and subtracting now, and give us little worksheets with activities to do at home with her to incorporate math into every day routines.

Last night Lindsey and I were reading "Heidi" for the third time. It starts by introducing Heidi as a 5-year-old girl, meeting a goatherd named Peter, age 11. So I asked Lindsey, "So how many years are there between Heidi and Peter?" and she and I counted starting at 5 up to 11 and got 6 additional numbers, so the answer was 6.

Once she realized that she can figure out how to do this, she got very excited. She said, "Let's do another!" So we did addition instead of finishing reading the book.

As I was leaving her room, she said, "Mommy, I want a book to read by myself." So we started picking out a book for her to read from the collection on the floor by her bed. Then she said, "Oh wait! No, I have my fingers, I'm going to count instead! Good night!"

This evening we had two accidents in our household -- one when Marissa peed on the floor (to be expected, it was only her second time wearing underwear) and one time when Lindsey forgot to take her underwear down before sitting on the potty, and she peed THROUGH it to the potty.

I laughed pretty hard at the second one. And thankfully Lindsey did too.
Posted by JennyF at 10:04 PM No comments:

Two Words with such meaning

Marissa's vocabulary has continued to expand and we are always entertained by when she tells us stories. She starts with lots of "uh uh uh's" but eventually gets to the point.

Tonight she and I were reading "Elmo Loses His Blanket," a book that has six flaps to open on each page to look for Elmo's blankie. Marissa's word for "open" is "ope." So here's what she sounds like as she searches for Elmos' blankie on each page:

[shuts flap, points to area with no flap]

[scratches at part of page with no flap]

[points to part with a flap]

It was a great example of how you can get a multitude of meanings from just a simple phrase, depending on how you say it.

I tried to get her to say "open," and she said it once, but once it got back to the book, "ope" was the word of choice.

She makes us laugh.
Posted by JennyF at 8:59 PM No comments:

Probably about once a day for the past week or so, something would happen and I would think to myself, "I gotta post that."

Then I get to my computer to write...and can't remember what the hell I was going to write about.

So I guess I'm writing about not being able to write. I'm still here, I'm apparently suffering from blogger's block!
Posted by JennyF at 9:27 PM 1 comment: 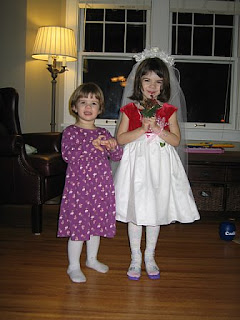 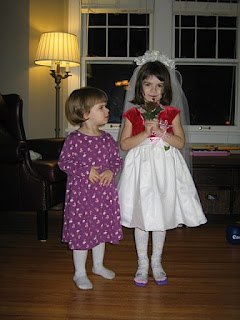 It's clear to me how very young we are when those of us of the female persuasion begin to "dream" of our wedding day.
I'm sure some of this is brought about by the Disney Princess (TM) line, as well as various movies, influences, etc. And it doesn't help that my wedding dress and veil is at the back of Lindsey's closet. 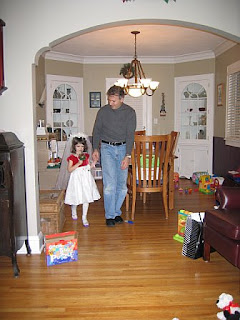 Lindsey asked me if she could play with my wedding veil, and she donned her Christmas dress that I bought (for cheap) after Christmas this year. It does fit this year, though I suspect it will still fit her next year as well. 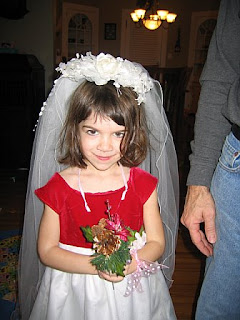 So she began to play "wedding." She found some Christmas decs of mine from downstairs, which became her bouquet, and would ask Wayne or I to walk her down the aisle, which started at the kitchen and ended at the storage bench in the living room. She asked me to sit where the minister would be, and then I needed to ask her name and the name of the groom, then I would say, "You are married happily ever after, you may kiss the bride!"
Eventually she got Wayne into the act, and he had to play the part of "Daddy," walking her down the aisle.
I think we'll have to pull these pictures out some time in the very far future, when she actually does get married.
Marissa played the part of maid of honor, obviously.
Posted by JennyF at 9:34 PM 1 comment:

Like it hasn't been cold enough of late, three things have happened that just rub it in how cold it is:

1. This weekend it got so cold that when I would open the side door to let the dog out, I had to ensure that my hands were not wet or damp (as they often are when cooking or doing dishes), as they were going to stick to the handle on the door.

2. It got so cold that our dishwasher stopped working. The waterline to it froze and wouldn't fill with water. Our air temp went below 0 at 4 pm Friday and didn't come back above zero until noon on Sunday...at which point it went back down under zero at 4 pm. Wayne left our cupboards open, hoping that the warmer air from the kitchen would get back to where the pipes were and de-freeze them. Something finally worked because finally Monday morning, our dishwasher finally worked. After three days of staying in the house, doing dishes after every meal, it finally works the last day of our three-day weekend.

3. The Packers lost, despite the advantage that the bitterly cold temps were giving them. Bummer, but the way they were playing they wouldn't have won against the Patriots anyway. Good luck to the Giants!
Posted by JennyF at 4:19 PM No comments:

So long to the Patterson's! 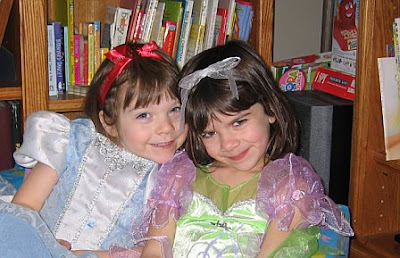 We will be greatly missing our friends the Pattersons, who safely drove in to Buffalo, NY yesterday, after leaving Minnesota on Wednesday. Above is a photo of their daughter Jamie and Lindsey, playing dress up for the gazillionth time. 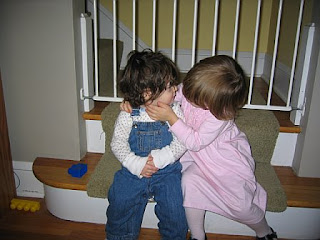 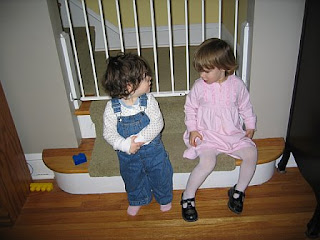 Yes, I also thought that Marissa was going to bite Molly, only to have her give her a very tender kiss. After they both looked and each other and wondered what that was all about.

This isn't some list that gets passed around through the internet that I'm posting here, this is the honest to God truth of what we've been doing the past few days.

The kicker came last night when I was attempting to wash dishes. I ran out of hot water right away and couldn't figure out why because we have a water storage tank, not a hot water heater, which is connected to our boiler since our entire house is heated with hot water. I finally figured out that between trying to keep the house warm and Marissa just having bath water run, it was enough to drain that entire huge tank of hot water.

I read in the metro section of our local newspaper today about one of the suburban high schools that cracked down on underage drinking by perusing photos students had posted themselves on their own Facebook pages of them at parties, drinking with other underage friends.

The school had penalized the students by various means, i.e. suspensions, kicking them off basketball/volleyball teams, etc.

Some of the students actually had the gall to protest against the school, claiming that they had "invaded their privacy." They staged a walk out on Friday and did not attend classes. Rather ironic, considering many of them weren't supposed to attend anyway since they had been suspended.

Let me get this straight...your privacy was INVADED? By viewing photos that anyone can view which were posted on the internet? The saddest thing was how many of these students parents backed them up, opting to send nasty letters to the school or threaten to pull their child from the school district. (As if their child was a gift to that school in the first place.)

Hey, how about instead having a chat with your son/daughter about the dangers of underage drinking? How about taking away rights to the family car as punishment? You're going to stand by your child who was drinking because you don't like the means by which the school found out? Where were YOU, the parent?

Good for you, Eden Prairie High!
Posted by JennyF at 9:36 AM No comments: 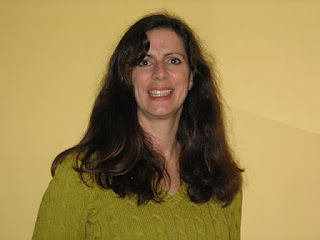 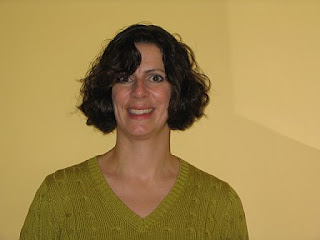 Okay, so perhaps the short hair on my last avatar gave it away. I had decided some time ago to donate my hair to Locks of Love, or some other such charity that can use human hair to weave wigs for cancer or alopecia patients who can use it.
Well, Locks of Love required a minimum of 10 inches of hair, even for the shortest layer of hair. My shortest layer was 8 inches, and I just didn't have the patience to grow it out anymore. So I did a little searching and thanks to the publicity from Hillary Swank, came across the Pantene Beautiful Lengths program, in which the minimum length required is 8 inches.
The majority of the hair that was cut was 10 inches, with the shortest lengths being 8. It all came off in one thick ponytail, which I then packaged up and shipped off to the charity.
It felt sooo good to get it all chopped off! I was grinning like a fool while my stylist was cutting away, and I am very pleased with the outcome. I can't believe how weighed down my hair had been -- hardly any of my natural curl was showing through anymore and after she styled it, wow! What curls!
So next time you see me you may see me start to do the "hair flip," but then stop and grin ridiculously. Or you may see me put my purse on my shoulder then go to move my hair out from under the purse strap, only to smile that it isn't stuck under there anyway!
I'm especially happy to be able to see my children again when I bend down to kiss them hello, without having to put my hair in a ponytail to do so.
Posted by JennyF at 9:32 PM 4 comments:

Last night I had a similarly creepy event.

I awoke in the middle of the night to hear Lindsey laughing. Clear as day, as if someone had just told her a joke.

It wasn't a sleepy, grunty laugh, one you would expect from someone still sleeping. It was the clear, crisp sound of her normal laugh.

Sure enough, she was dead out sleeping. She must've been having some good dreams, though, to laugh like that in her sleep.

Creepy.
Posted by JennyF at 9:36 PM No comments:

Email ThisBlogThis!Share to TwitterShare to FacebookShare to Pinterest
Labels: Nighttime/Sleeplessness

First Day back at KinderCare

Today we were talking to Lindsey and Marissa about how their day was today, their first day back at KinderCare in a week and a half.

Lindsey told me she had a bad day. She said, "There were lots of kids there and they made a lot of noise and I didn't like it."

Marissa had the following to say.

Wayne asked, "Marissa, were you naughty or nice at KinderCare today?"

Wayne: "What do your teachers say to you when you're naughty?"

We thought that was pretty funny.
Posted by JennyF at 7:42 PM No comments: