Marissa had chronic ear infections the first year of her life. Her nose was constantly running, her ears always aching, and she was a downright miserable kid. When she turned one she got ear tubes, which drained the nasty infectious stuff so at least she could sleep at night, but ironically it didn't prevent the infections. (I will not describe the scene to you of waking her up many mornings with ear drainage smeared across her face, her pillow, and making her hair stick up. Okay, I guess I kinda just did. Plus...it smelled and she needed many, many baths. Her sheets were washed nightly.)

This pattern continued despite the ear tubes. Her nose ran constantly. We stopped wiping it all the time and considered the initial layer a protective coating that kept her skin from rubbing off with every wipe of a tissue. None of the other parents at daycare would set up play dates with her, they thought she was always sick. And, she was.

She would get a cold which would turn into an infection. We would go to the doctor who would prescribe antibiotics. It would clear up eventually, but the minute the antibiotics stopped, it started all over again. She needed stronger and stronger antibiotics, which also did a number on her tummy. Poor kid.

We finally sought the opinion of her ENT who suggested that removing her adenoids may help. He had barely said the words and we scheduled the surgery. He wanted to do one more round of antibiotics "just to see if it would clear up," but she'd practically been on them her entire life, what would one more week do? We were tired and frustrated of having a cranky, unhealthy kid.

Around her second birthday she had her adenoids removed; the change was immediate and dramatic. By the evening of the surgery, she was smiley and playful. I didn't want to put her to bed when it was bedtime, it was such a treat to see her so happy. In the morning she woke up singing! Or babbling. Or something other than the howl we heard most mornings. Looking back, it must've been like waking up with a full-on sinus infection every single morning of her life. Such joy she must have felt awaking without a headache and a clogged skull.

Her nose cleared up, her ears cleared up, and any cold she caught after that stayed exactly that: a cold. No more drainage, no more nastiness, and we had a super happy baby. Yeay!

She grew and grew, and at age 6 began losing her teeth. One of the first teeth she lost was replaced with a tooth of the most unusual yellow, almost chalky white around the edges. Her dentist murmured something about "malformed enamel," and that was that.

Then another tooth came up with an interesting pattern of clear and white enamel. And another. We changed to a pediatric dentist who first used the word "hyoplastic enamel." Thus began our education.

Hypoplastic enamel is enamel that malformed while the adult teeth were maturing in her head during the first years of life. I learned a lot about tooth maturation. Ever see the skull of a child with the dental cavities exposed? It's creepy. I can see where the director got the idea for the creature's mouth hole in "Alien." You are born with adult teeth buds in your skull, and during your first few years of life they grow into the adult teeth that eventually push down into your jawbone once your head is big enough for the fully grown teeth. It's quite an extraordinary feat of human anatomy.

So why do some people develop hypoplastic enamel? Recent studies have pointed to chronic antibiotic use in infanthood as a probable cause.

Let me say that again: Chronic. Antibiotic use. In babies.

At age 12, Marissa already has 3 fillings, one crown and a capped baby tooth. The baby molar needed a cap because the enamel all around the edge of her gums literally disintegrated. It was like a cavity encircling her tooth; there was no way to "fill" it, and no point in anything more than a cap since it was a baby tooth and was going to fall out anyway. She recently lost that tooth, and we joked about her "cybergenetic" or "bionic" tooth.

When she had the crown done recently, the dentist told me that as she began to file down the existing tooth it literally crumbled under the slightest pressure of her tool. Her current crown will need to be replaced when she's 18, and eventually she will probably need an implanted tooth because the dentist isn't confident that the root of the tooth can hold.

Remember my last blog post, about my phobia of bad teeth? Marissa is going to face a lifetime of expensive dental work, filling, repairing and replacing her teeth through the years.

I'm angry that her permanent teeth were permanently ruined. all because she had a runny nose when she was a baby. Had we known then what we know now we would have insisted on more aggressive intervention earlier to reduce our antibiotic use.
Posted by JennyF at 9:10 PM No comments:

It's Not Dental Phobia 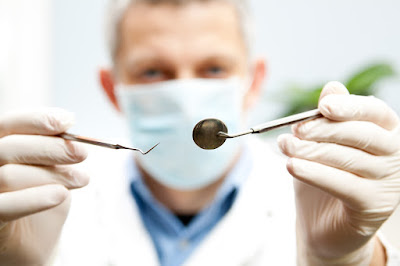 I have a permanent retainer behind my bottom teeth, and I loathe how it captures food and I can't get it out. I brush, floss, and have even bought cheap dental tools to pick at this retainer.

Then I got the best advice ever — a friend of mine who has the same issue has her teeth cleaned every 4 months. Sure, you pay for an extra cleaning a year out of your own pocket, but it's all of $85 and it's worth it to me.

Yesterday was my cleaning, and I got into an interesting conversation with the hygienist. Or, I should say, she had a lot of interesting thoughts that I agreed with by making odd sounds with my mouth wide open.

She talked about seeing patients who finally came in for a cleaning for the first time in 15 or 20 years. They have such dental phobia that they never see a dentist. Some have no issues at all, just really, really dirty teeth, while others end up with a mouthful of cavities and future crowns and bridges.

Upon thinking about this, I've determined that I don't have dental phobia, I have a fear of bad teeth. Our teeth are made of bone; once they're gone, there is no substance in the world as strong that will replace them. Crowns need to be replaced, bridges fall apart. Our natural teeth are the authentic manufacturer-installed parts; once they are replaced, the fit isn't quite as tight, the holding as deep or strong.

I have dreams (nightmares, really) where my teeth suddenly start falling out of my mouth at random and I am devastated. I worry that my teeth will start wiggling and coming out like baby teeth. I fear the day that I'm told I need a crown, because I loathe the idea of filing down two perfectly good teeth just to put a false one between them.

It's been working out well. About a year ago my dentist noticed that one of my molars that's had a filling in it since childhood was starting to crack. He recommended that we remove the old silver filling and put in a new one made with material that would flow down into the crack and seal it, hopefully saving the tooth from cracking further. It's been a year now, so far so good.

Every dentist I've ever had as an adult has commented on how good the fillings I had put in as a child are. Thank you, Dr. Nyder, our next-door-neighbor and dentist, for your awesome work 40+ years ago!

Well now, this was a completely random post, I can't believe you made it to the end. Thanks for reading my rambling thoughts. It's leading me to another post about my daughter Marissa's dental woes, stay tuned for that if you actually read this one.

Posted by JennyF at 7:50 PM No comments:

A live performance of "Jesus Christ Superstar" played on NBC last night, and I was the only one in our household interested in watching it. Lindsey watched the first five minutes, declared it "noise" and went upstairs to watch a movie on her kindle in her room.

Not that I'm religious, I just really like a good rock opera. Actually, I think JCS is the only rock opera I know. There is no dialog that is not set to music, and the whole thing is all electric guitars, drums and screaming solos, I'm pretty sure that's the definition of a rock opera.

I first got to know Jesus Christ Superstar as a kid. It came out as a record in 1970, and my parents had the album. It was a two-album set, with sides 1 and 4 on one record, 2 and 3 on the other. Our record player let you stack up to two records and it would play two sides one after another, and then you had to flip the records and re-set them to play sides 3 and 4. I still remember the anticipation of hearing the second record drop, the click of the needle picking up and then the scratch as the needle hit the starting groove and began to play. I would sit with the lyrics, which were written like a script, and study the words as it played.

The live performance last night maintained much of the original rock performance, but updated with today's vocal talents and instrumentation. I've only ever listened to the music, never watched a performance of it, and it was only last night that I realized that "Jesus Christ Superstar" is not about Jesus, it's about Judas. Judas has more solos and attention focused on his very human angst at not wanting but needing to betray Jesus.

In Judas' final solo, he has ascended to heaven and is accompanied by angels. Dante Alighieri would not have agreed with this idea, as he put Judas in the final circle of hell in his epic poem "Inferno." But in this interpretation, Judas did a necessary deed to make a martyr of Jesus, and his payment is ascension to heaven.

I knew every word and completely enjoyed this interpretation of this classic. I thought Ben Daniels, who played Pontius Pilate, was weak on his final proclamation sentencing Jesus to death, and Alice Cooper was not the energetic King Herod as he should have been, but he did add entertainment value.

Of course, I smiled thinking that Paul Gilles was a huge fan of Alice Cooper, Deep Purple AND Black Sabbath. I think he would have cringed seeing the great Alice Cooper in this diminished role. But perhaps not, maybe he would be happy to hear that some of the classic rock sound that he loved is being embraced by a new generation. I know I did.