Hey Everybody! Let's market clothing to teens that reduces their self-worth!

Since Marissa's been at home doing distance learning she's no longer in her school uniform and is wearing comfy clothes every day. Her favorite sweatpants finally wore through and she did a little online shopping to replace them. She selected two pairs from PacSun and they were delivered to our door. Unfortunately they were both a little too big, so we went to the local PacSun store to return them to select a smaller size.

After returning the clothing to a sales associate, Marissa made her way to what I thought was a tasteless display of Playboy branded materials at the front of the store. She began sorting through the sweatpants with little bunnies on them, looking for the right size.

"Uhhh....you are not buying Playboy branded sweatpants," I told her. She looked at me with a shocked look on her face. "Playboy? What are you talking about?"

She thought the little bunny wearing a bowtie was just a cute graphic. She had no idea that it stood for the Playboy brand. And then she informed me that the sweatpants she had bought online were Playboy branded — I just hadn't seen the icon before approving the order because it was so small on the screen!

We laughed about the fact that she didn't know they were Playboy sweats and I didn't realize she'd purchased Playboy sweats. But then we had a real discussion about why a retailer that caters to teens and young women would carry the Playboy brand and honestly, I don't get it.

I tweeted to PacSun and told them how disappointed I was that they carry the brand. Then again, PacSun also carries Brandy Melville clothing. If you don't know this clothing line, they have really cute items for teens, but they have no sizing. Really. The tags all say "one size." If you don't fit into the size they have, well then, I guess you're not the right size.

What a great idea, market cute clothes to teen girls in their growing years when self-consciousness is its highest and self-confidence is often at its lowest, and make them feel worthless for not fitting into tailored clothing that assumes that all teen girls should be able to fit into their "one size." We looked through some of the pieces and they were tiny. Some of Marissa's short, petite friends could fit into them, but probably not the vast majority of teen girls. "One size" clothing should be reserved for scarves or hats, maybe a wrap, not jeans or tailored shirts.

Marissa finally found some sweatpants that weren't offensive and that actually fit. selected from the fraction of the store that wasn't off limits due to its brand or its size. I'm not sure she'll want to shop at PacSun in the future. I'm grateful that she and I could have the conversation that we had on the way back home about the issues with both of these brands.


Marissa and I had such an interesting conversation tonight, as we often do.

She was talking about how people have told her that she is "living through history," with the pandemic raging through the country. She said, "I always thought that history was something that happened to you when you were a kid, and once you were grown up history didn't happen anymore. I didn't think about the fact that you and dad are also living through historic times."

I told her about how my Grandpa Vern Floria, my dad's dad, was born in 1901 and died in 1996, just short of his 95th birthday. A few times I would talk to him about what he'd seen in his life.

He remembered a time when cars weren't everywhere, when you were lucky if your family had a horse to get around, and otherwise you walked.

He remembered when zippers were invented. All the rich kids could afford to have them, while he and all the other poor kids were stuck wearing button-fly pants.

He was too young to fight in WWI (just 14 when war broke out) but too old for WWII. His eldest son, my Uncle Dean, fought in WWII, his youngest son, my father, in the Vietnam War in the early 1970's.

"Imagine," I said to Marissa, "Grandpa Vern remembered when zippers were invented, what life was like before cars, and also lived to see the personal computer change the way the world works."

"Wow," she said, "Omigosh, I just realized something! He was alive when 'Friends' was being broadcast!"

And there you have it, Marissa's version of living through history.

Posted by JennyF at 8:14 PM No comments:

I hope I'm not alone in wondering when to seek medical attention for my kids. When is it appropriate to tell them to "buck up" and when should you seek an expert's advice? I have the privilege of having two kids for whom every ache and pain is deemed worthy a trip to the emergency room...at least in their minds. I cured one of my kids of that by finally taking her. After six hours of sitting around, she was given two ibuprofen and told to go home, they couldn't find anything wrong with her.

About six weeks into the school year, Marissa started complaining about her elbow hurting. She was careful about bumping into anything, as any touch caused her pain. Eventually we ended up at Tria's urgent care for it, where she was fitted with a partial splint to protect it and keep it somewhat stationary.

There, the doctor took a look at her record and her many trips to Tria for this same elbow, and said, "Hmmm....we've seen you a lot for this, but we've never taken an MRI. Let's do that."

They did more testing and an ultrasound which showed that as she moves her arm the muscle impinges on her ulnar nerve. A-ha! The source of her pain. Thankfully they could do an outpatient procedure to remove the tissue that was compressing the nerve.

She was cleared for surgery and we were able to get it scheduled in a week. Dr. Bohn (pronounced "bone," which I thought was ironic considering she's an orthopedic surgeon), was highly recommended and had an opening on Thursday, November 5th.

Marissa barely slept the night before surgery. She was anxious about the coming day, as anyone would be, especially a 15-year-old. She and I stayed up together from 2 a.m. to 4:30, entertaining each other with stories and laughing. Pretty soon her mind was relaxed enough that she could get a couple of hours of sleep before we had to go to the surgery center. 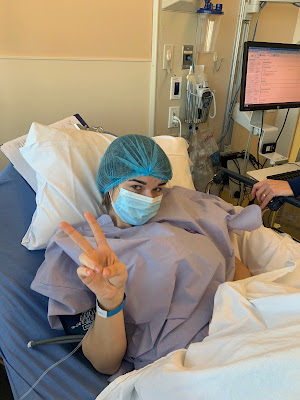 Marissa was amazing through all the pre-op. She got an IV with no issues, chatted with the nurses and asked a lot of questions. They gave her a nerve block for her arm, which deadened all feeling in her arm and made it feel like it weighed 100 pounds. She said her arm felt like it belonged to a stranger.

Finally Dr. Bohn came in to greet her before surgery. She said, "Let me check to see how this arm is doing," she picked up Marissa's arm and let it go. It dropped like a rock onto the pillow below. Dr. Bohn laughed and said, "That cracks me up every time."

Marissa did great and the surgery went well. Dr. Bohn had to transpose Marissa's nerve to another area of her elbow joint, so it will take some extra time to heal. It took Marissa a while to wake up, but eventually she did and we headed home for recovery to begin.

The day after surgery all of the nerve block had worn off and Marissa was in a lot of pain. The meds she had been prescribed made her sleep and she slept most of the day, but whenever she was awake she was in a lot of pain, so we got a different medication that would help more.

It's been a few days now, and every day is better than the day before. Hopefully no more trips to urgent care for elbow pain for her. 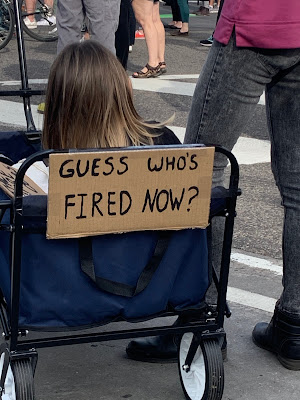 Today the media declared Joe Biden the winner of the 2020 presidential election.

I didn't know how to feel. I was thrilled, in awe. I was sad that it came down to this. That 70 million people had voted for hatred, for white supremacy.

I had been invited — several times via text — to a rally this afternoon. I didn't plan to go, but after Biden's win was announced via mainstream media an hour before the rally, I decided to attend. I was rejuvenated, energized, excited. I had to celebrate with like-minded people. And so I went, and had the most incredible experience.

I've never seen so many people from so many walks of life come together for a single movement. This wasn't about women, or Blacks, or homeless people, or Natives...this was about ALL of us. Together. Signs demanding change to address climate change. To require paid sick leave. To create policies to acknowledge that Black lives matter. To allow women to control their own bodies.

THIS was the embodiment of intersectionalist activism: When every cause becomes my own cause. We are all on the same page, speaking out for the most vulnerable among us, those without a voice, without the means to advocate for themselves.

I saw Blacks and whites bumping elbows, friends greeting friends, people dancing in the streets. I can't think of another election that created this much jubilation among its supporters. A Native American tribe of dancers danced in front of the marchers, all speeches translated into sign language and Spanish.

I have been to dozens of protests and rallies and marches this year, and years prior. None felt like this one. The sense of community, that it was always welcome to speak to your neighbor, no matter their color or religion, the spontaneous dancing, the jubilation.

Trump's supporters may see it differently, but they have no idea. They've been blinded by his rhetoric and glamour. He has spoken lies, and they chose not to hear the "mistruths." This is not just any old victory, this is as if the people of Germany had the ability to vote Hitler out and did so. Bells rang in Paris, people took to the streets in Belfast, Ireland, fireworks went off in England. This isn't just Democrats supporting this win, it's the world, relieved that Trump will leave office. The world feels a little safer now.

Hate crimes increased exponentially since Trump took office. His rhetoric inflamed hatred, divisiveness, racism, xenophobia and misogyny. His policies only benefited white men with money. As Paul Wellstone said, "When we all do better, we all do better." Under Trump, no one did better,  unless you were white, male, and privileged, and most definitely a family member.

With Trump as president, it felt like the people against the government. And while I know Biden will not be the savior we need, he won't be the Satan we had. Perhaps now we can move forward. Together.