The gifts become a blur.
The wrappings are stripped away in a flurry of activity.

The boxes are tossed aside and trappings of the toys are hastily removed and discarded.

What will we remember?

Family.
Posted by JennyF at 7:59 AM No comments:

The Season of Giving

I had an interesting discussion with my co-worker yesterday about teaching our children about the spirit of Christmas giving. Her kids, ages 13 and 15, were spending the 23rd out shopping with their dad, looking for the perfect gift for each other and for their mom (my co-worker).

My kids, ages 6 and 8, do not shop for each other or for us. I remember being a child and buying presents for my parents and my sister, but don't remember at what age we started doing that. I distinctly remember the year I bought my dad a hammer. I wrapped the box so carefully and it turned out gorgeous, with perfectly angled corners and a ribbon tied just so. I couldn't wait to give it to him, but as I carried it to the tree I realized it was lighter than it should be. I had forgotten to put the hammer in the box! And I didn't want to ruin my wrapping job and re-wrap it.

On Christmas morning, I handed Dad the box to open -- he joked about how light it felt and wondered if there was a gift inside. Little did he know there wasn't! He opened it, searched in the tissue paper for a while, and then I ran upstairs and got the present out from under my bed while the family laughed. It was the most memorable gift he received that morning. (At least to me it was.)

Are we depriving our children of this same joy by not teaching them yet to give to others? 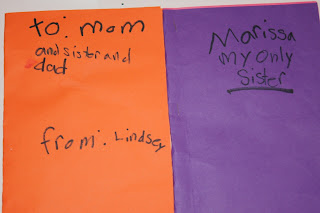 Yet I feel like they already have that spirit.

Every day for the past week and a half they've been coming home from school with various "treasures." Usually these treasures are of the paper kind, little love notes and drawings that they made especially for us. Marissa made a photo frame with a picture of her in it that she could not WAIT for me to open, so we didn't. 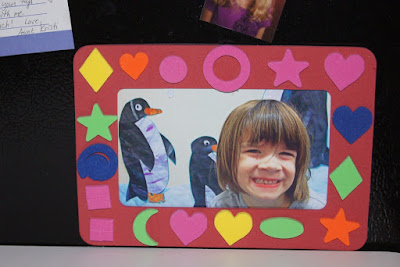 I've always told the kids that the best things they could give us are the homemade things, not something that comes from a store.

On Black Friday this year consumers spent $52.4 billion to kick off the holiday season. That's billion with a "b." Imagine the good that money could have done if we had spent it on something other than ourselves.

I think I'm okay that they aren't buying presents for others yet. 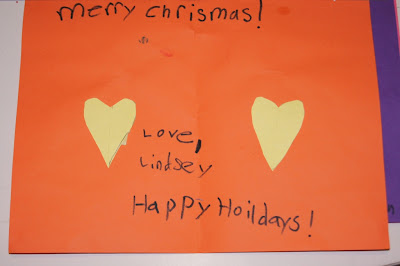 Posted by JennyF at 6:06 AM No comments: 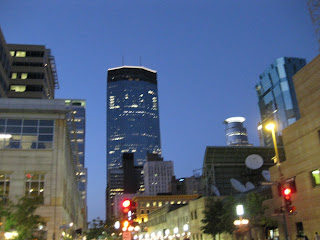 I've said it before I'll say it again: I love where we live. Even as winter descends upon us and we brace ourselves for bumper-to-bumper snowy commutes, and cold that takes your breath away and freezes the hairs on your face, I love it.

Here's a great example why.

I am on the email list for the Minneapolis Police 5th Precinct. On the other end of this email list are two Crime Prevention Specialists. They work with investigating police to enlist the help of the public to solve crimes.

Yesterday they sent out an email asking for assistance in gathering evidence for a burglary suspect:

On December 13, 2011, a suspected burglar was apprehended in the 3rd Precinct with several items of interest in his possession. One item was a camera that may have been taken in a burglary but we are unable to find a police report on this item. The camera is an Olympus Stylius. There are pictures from Vicksburg, MS of the Union Trench Matthies JJ Woods Brigade Historical Marker, one with a white male and female walking in the trench. If you are the owner of this property, please call Ofc. Goligowski at 612/673-XXXX.
Attached to this email is a document with a picture of the Vicksburg battlefield.

I'm pretty sure the police in my hometown of 7,000 people doesn't do this. Maybe they do, but if so, I would expect that of a police department serving 7,000 people, not of one that serves several hundred thousand. They aren't asking for assistance in solving a murder or an assault, but burglary, which is probably one of the lower priority crimes Minneapolis has to solve every year.

The best part was that a few hours later they had been flooded with so many calls they sent another email out to clarify:

We have been getting numerous calls from people asking if the camera we recoverd is theirs. The photos in the camera were taken in 2011, probably in March, in Vicksburg Mississippi at the Union Trench Battle field. If you weren't at that battle site, this camera is not yours.

Yep, there we go, showing our lack of reading comprehension skills as a public, and I'm sure that fielding all of those calls was frustrating. Yet the possible benefits of getting the public's help outweighed that hassle, and they had still reached out to us.

Earlier this year we were informed that the Crime Prevention Specialist positions in the 5th precinct were on the table to be cut by the city.  Budgets are tight everywhere, and Minneapolis was looking to the police department to be a part of cutting costs. The reason the 5th precinct was selected is because it is one of the safest areas of the city, and the resources in other areas are considered more critical to save.

Because our two Crime Prevention Specialists have been the faces and voices of the MPD for this area, the public rallied. We showed up at budget meetings, wrote letters to the police chief and mayor and had tangible examples of all the ways the CPS positions have helped to keep this area of the city as safe as it is.

The positions were preserved, and we all got a touching email from the two people whose jobs had just been saved.

Now that's community.
Posted by JennyF at 5:46 AM No comments:

This past Saturday I ran the Reindeer Run 5k with a friend who I met at Halloween. In our first meeting I discovered that she is a runner and has had her eye on the Reindeer Run as her next race. So we agreed to sign up together and dress up.

I found some Santa hats with leopard print trim -- sure, why not?

We had a lot of fun -- Lindsey's 30 mins 22 second 5k still stands as the record between her races and my own. 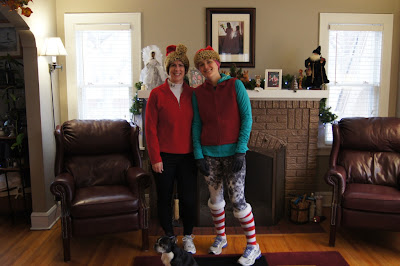 Our running gear was pretty tame in comparison to others. There were some who were *not* dressed up for the run. 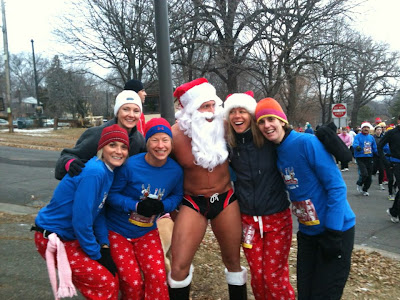 Yes, seriously, we saw this guy. he arrived just as the race was starting. I would've too if the largest piece of my costume was my boots. It was 28 degrees at the start -- brrrr!
Posted by JennyF at 8:30 AM No comments:

Without planning it, the girls happened to dress similarly one day, both in shades of black and gray, as had I (with the exception of a scarf to add some color.) We thought it was so funny we decided to take some pictures to document the event. 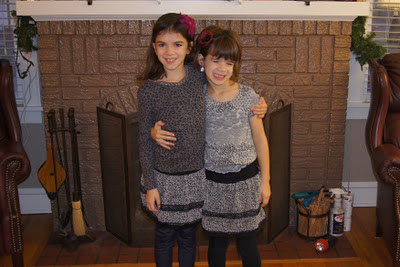 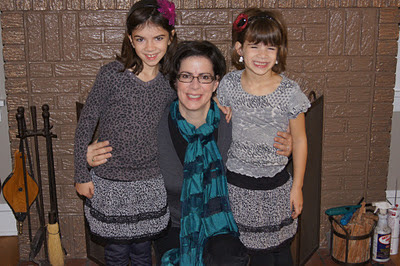 I love the headbands with similar red flowers, both of which were purchased in Tracy over Thanksgiving weekend.
They are growing up so quickly.
Posted by JennyF at 7:00 AM 1 comment:

Email ThisBlogThis!Share to TwitterShare to FacebookShare to Pinterest
Labels: Style 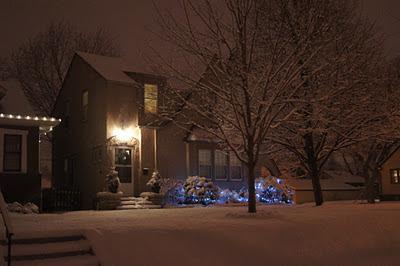 We finally got our first snow of any substance this past weekend. It was supposed to be a trace, it was more like 3 inches. It began around 3 o'clock in the afternoon, and didn't finish up until after midnight.

I had been down at a neighbor's house that evening, and left her home to walk back to mine around 9:30. I walked outside to find 4 or 5 neighbors outside, shoveling, walking dogs or playing in the snow. It was a festive atmosphere, yet still quiet with the hush of new fallen snow.

My photo doesn't do it justice.
Posted by JennyF at 9:14 PM No comments: