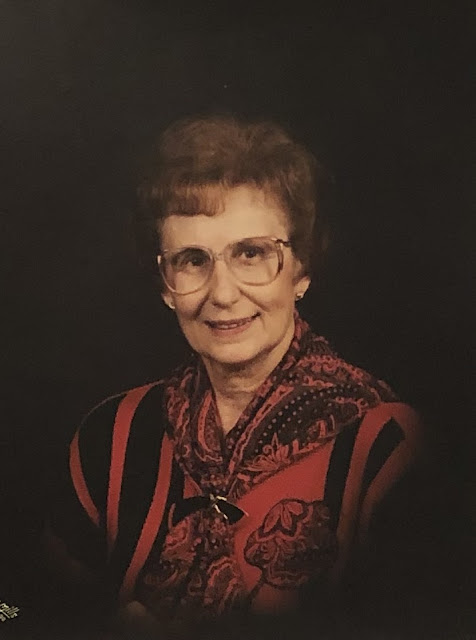 My step-grandmother Janet Lau passed away a couple of weeks ago. She was 94 years old, in terrible pain and unable to get around due to osteoporosis and a myriad of other medical issues. She had told her son, my stepdad, several times that at night she prayed that she wouldn't wake up in the morning. She finally got her wish on August 26th and never woke to see the following day.

Her husband Norman died 40 years earlier of a heart attack, far too young. He had not been feeling well and left work to see a doctor. The doctor didn't think he had the signs of a heart attack and sent him home — he died later that day. Janet never remarried. She only ever went on one date and afterwards told family that no one could take Norman's place and never dated again.

When I first met her nearly 30 years ago she was busy traveling the world with her sister, Doris, who had also lost her husband. Back then I called her my "Las Vegas grandma," she could often be seen wearing one of those be-dazzled, flashy zip-up coats over a t-shirt, with sneakers that matched the coat. Her hair was dyed a strawberry red blonde and was always perfectly coiffed in soft curls around the crown of her head. She and Doris went to Vegas, Hawaii, Branston, MO and other places, taking in the sights and shows that could be had.

Janet loved to play cards. I mean, she looooved to play cards. Every time I saw her, within half an hour of her arrival we were either eating a meal or playing a game of spades, or hand-and-foot, or sheepshead (okay, I wasn't playing that one, I have no idea how, but she was able to play that strategic game until the week before she passed). She was up for any game, as long as it involved cards.

At Christmas she made a traditional German dessert called "himmel futter," or "heavenly hash." The base is called a torte but was more like a crisp meringue with dates and figs baked into it, covered by various fruits, then completely covered in whipping cream. I had never had such a thing before, and the first time I tried one I was in heaven, it is so absolutely delicious.

She raised a wonderful family. My stepdad is a patient, generous, kind and loving man. He is a gift to my mom and our family. He was the primary caretaker of Janet as she got older — he and my mother worked with the home where she lived to ensure she got her medications, managed her finances, and more.

And now she's gone. The managing and caring of Janet is complete. All there is to do is to unravel her life. 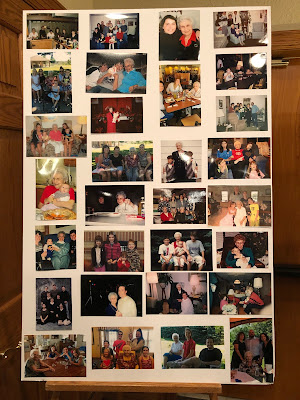 Cancel the newspaper she used to read daily. Inform the Social Security office, the government entities that need to know. Clean out her modest little place at the assisted living community. Much of her worldly goods had already been gone through and given to family members who wanted them. Furniture, kitchen wares, pieces of art and more were all in the possession of others. Now, what was left: a hair comb. Bobby pins. Nail file. Shampoo. A small jewelry chest with some last remaining pieces of jewelry. It feels weird to go through a dead woman's things, sorting and sifting the last few items for usefulness or memories.

Janet wrote her own obituary and funeral arrangements. She asked for specific readings from grandchildren, whichever ones thought they could or would want to read. My stepsister Michelle sang a touching song which Janet picked out. The service finished with some beautiful words from Janet herself (paraphrased):


The Lord has come to take me...Let kisses, kindness and love for one another replace the tears. I leave to all of you my legacy of love.

She truly was a gift to this world and will be remembered with fondness and love.

Posted by JennyF at 8:23 PM No comments:

Email ThisBlogThis!Share to TwitterShare to FacebookShare to Pinterest
Labels: Family 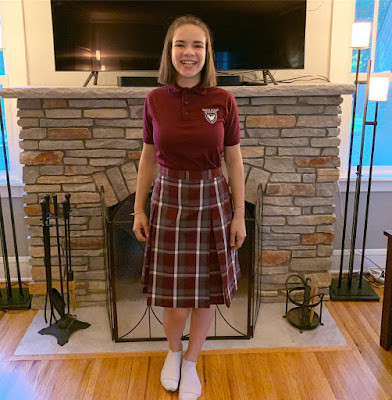 While many kids are going back to school today, Marissa has already been at Eagle Ridge Academy one week. What an amazing week it's been!

Her first night she came home with a passage she had to read and answer questions about. The passage? "The Apology" by Plato, written about Socrates' trial and sentence, as translated from ancient Greek. It starts like this:


How you have felt, O men of Athens, at hearing the speeches of my accusers, I cannot tell; but I know that their persuasive words almost made me forget who I was - such was the effect of them; and yet they have hardly spoken a word of truth.

For a girl who does not love to read and is often quite literal in her interpretation of writings, this was going to be a challenge. I read it aloud to her over several nights, paraphrasing what each section meant so she could make sense of it and answer the questions. If a person is unaccustomed to reading this kind of writing, it is incredibly difficult to understand. But with practice, it gets easier. By the end of the week she was starting "The Iliad" by Homer and was having no problem reading and comprehending the stanzas on her own. Wow, okay...

Some observations about her school that she appreciates:

1. She is loving wearing uniforms. So far she can't tell who the "popular" kids are in her class because everyone is dressed the same, there are no brands to distinguish between the "haves" and the "have nots."

2. The class sizes!! Her largest class is Humanities with 16 students, her smallest is Spanish with six. She is one of very few freshman in her Spanish II class and has a native Spanish speaker as a teacher, which she is super excited about.

3. School lunch is delicious! She brought a lunch the first day but after that has been eating the lunch at the school. It is freshly made there at the school, not shipped in and warmed like her lunches at Lake Harriet, and there is always a salad bar option.

4. They pipe in classical music to the lunchroom during lunch time. It is a classical education school, after all! There is plenty of room, there are even a few empty tables in the area, and she eats with the entire 9th through 12th grade students. Lunch is at a reasonable hour, because they don't need to stagger lunches due to class size. (Her lunch at her middle school started at 1:40.)

In a small group in her Humanities class they were discussing Achilles, which Marissa pronounced "Ah-CHILL-ease" having never encountered the name before. A boy in her group teased her about not being able to pronounce it. Shortly after he said, "myu-SAY" for muse, and she teased him back. The rest of the class they gave each other a hard time and intentionally mispronounced things to see who could say it the silliest.

She has already made many friends, both girls and boys, and has mixed grades in many of her classes — many are helping her get accustomed to the new things she's studying. Most everyone in school is engaged and ready to learn. She often gets frustrated and annoyed at students who talk or whisper while the teacher is talking, especially because with her ADHD she has a really hard time tuning out distractions. That is less of a problem at Eagle Ridge than at her last school.

I'm so excited for her to be at this school and for the opportunities she will have there.
Posted by JennyF at 4:12 PM No comments:

The Glue That Holds Us Together: High School Reunions


This weekend was my 30th high school reunion, and it was pretty amazing.

I graduated with around 150 students from Sheboygan Falls High School. I have fond memories of my high school years — playing in the band, acting and playing for musicals, forensics competitions, and all-around fun.

Social media makes these reunions so different from what they used to be. We all keep up with each other's lives from a distance, but only what we all share on Facebook. A fun day, first day of school, a special dinner out for an anniversary, a kid's sports accomplishments.

But when we all get together, we share each other's lives. And because we've known each other so intimately, granted a long time ago, we are all pretty open about challenges facing each of us. Divorces. Careers gone askew, demanding jobs that suck the life out of a person. Challenges raising children. Caring for aging parents. The real deal that doesn't get shared on Facebook. And often these troubles are met with encouraging words of "I know what you're going through," or "You should talk to so-and-so, they went through something like that," or just, "I'm sorry that's happening to you."

Plus there are things to celebrate. One classmate opened a tab and let people know to have a drink on him. His explanation? "I've just been so fortunate in my life, and I want to share my good fortune with others." Wow, that's awesome, thank you!

I was speaking with another classmate and asking how life was going and he said, "I love my job, I love my family, I've got good health, I'm about as happy as I can be in my life right now, and I'm so grateful for it." That's the best any of us can ever hope for, and I'm so happy for him.

And sharing those high school memories, oh my! What is it about graduating high school together that becomes a glue that holds people together?

As seniors, my girlfriend Jody and I once had Domino's pizza delivered to the school for lunch. (There were other people who did this with us, I can't remember all of them.) We brought it into the lunch room to eat and the vice principal just about had a conniption, I've never seen that man's face so red. He was a small guy, not very tall or broad, but we got out of there with that pizza pretty quickly. Eventually we got smart and had pizza delivered to Jody's house just across the street. We would run to her house so we wouldn't get caught leaving the school to eat it, then dash back before the bell rang.

My friend Judi recounted spending hours in my basement, listening to music and goofing off. Had Wendy been there I could have told some good stories of a sleepover at her house where she pretended to be sleep-talking but wasn't really, she was just giving us a hard time.

Our class is planning on creating a scholarship fund and at our reunion appointed a committee of people to work on this. That's a pretty amazing legacy that we'll be leaving for future generations of graduates from Sheboygan Falls.

It was a great weekend getting together with my classmates, and I am so grateful for their being in my life, even if it's only every 5 years.

Posted by JennyF at 7:40 PM No comments: