You may not remember her name, but Somer Thompson is the name of the 7-year-old girl from Florida who went missing walking home from school and whose body was eventually found in a garbage landfill some miles away.

If you've read any accounts of her abduction, I hope that the girls who had been walking home with her that day are receiving counseling. She apparently had an argument with one of the girls she was walking with and Somer's older sister told her to "cut it out." At that point Somer ran ahead to walk home alone, and never made it.

The guilt that those children must be feeling must be enormous. I hope that they the "what if's" aren't running through their heads any longer, and that they understand they are not responsible for what ultimately happened to their friend that day.
Posted by JennyF at 5:32 PM No comments:

Here's a video from this past summer, when we vacation in Upper Michigan. This evening was in Marquette, at my cousin's house. What oh what did we do before children for entertainment??

Email ThisBlogThis!Share to TwitterShare to FacebookShare to Pinterest
Labels: Vacation

Forwarded by my sister-in-law:

A woman and a baby were in the doctor's examining room, waiting for the doctor to come in for the baby's first exam.

The doctor arrived, and examined the baby, checked his weight, and being a little concerned, asked if the baby was breast-fed or bottle-fed.

"Well, strip down to your waist," the doctor ordered..

She did. He pinched her nipples, pressed, kneaded, and rubbed both breasts for a while in a very professional and detailed examination.

Motioning to her to get dressed, the doctor said, "No wonder this baby is underweight. You don't have any milk."

Yesterday our family went for a picnic at Lake Harriet. Being the wimpy coldy family, we drove down there, which made for an altogether more pleasant experience than we would have had walking and whining. Much less how much the kids would have complained.

The picnic started like any picnic, with a cooler full of food which we promptly set into. Then the ducks discovered us, so they began swiming toward us looking for some goodies, which the girls obliged them with. I think Marissa threw half her peanut butter sandwich at them a piece at a time. 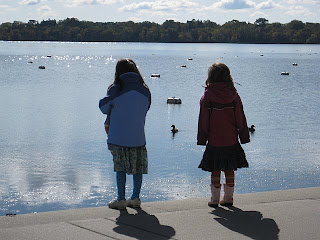 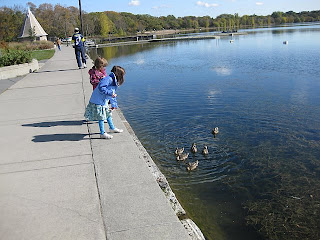 Then the picnic went for an odd turn, as pedestrian by pedestrian walked by our table and looked oddly at the two "babies" at our table. Yes, Lindsey and Marissa's "big baby" dolls, which are oddly life-like, were drawing some stares. One appeared to be sitting upright on the bench, while the other was sprawled across the table. Finally two people approached us and told us they thought the dolls were real.

For an idea of how big "Big Baby" is, here's a photo from when Marissa was born. Marissa is the small one wrapped up in my arms, Big Baby is...well, bigger than she was. 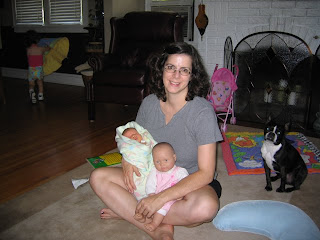 So needless to say we decided that the Big Babies should have some more fun on their picnic than they were currently having. So we propped them up against a tree and told them to "smile," as if they were real babies. They were happy to do so. 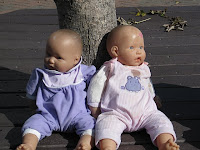 Then we asked if they wanted to climb a tree, which they did. 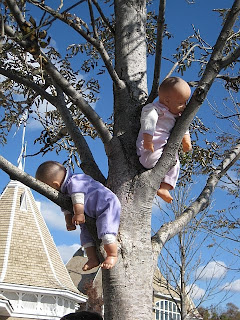 And just to make sure they didn't fall, their ever watchful parents, Lindsey and Marissa, stood under them, ready to catch them should they fall. 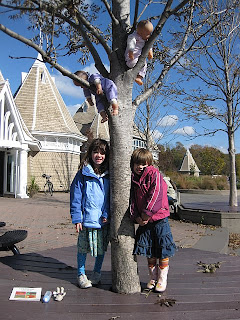 After the fifth person glanced over and wondered if they should call social services, we decided to pack it up and go warm up with a cup of coffee and hot chocolate. So off we traipsed to Dunn Bros in Linden Hills, where they have a nice sized but somewhat dirty play area for kids. Not that the kids cared. They were too busy "reading" to their big babies, and dancing when the music turned funky. 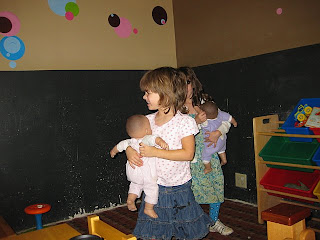 That's my idea of an urban picnic.

Lindsey was off school this past week Thursday and Friday for a very Minnesota-like break, called MEA. Now everyone I know who grew up in Minnesota knows exactly what MEA is and why it is a sacred holiday to all those still in the educational system. Me? I was a little confused for a lot of years, and to a certain extent still am.

MEA stands for Minnesota Educator Association. It is a two-day conference that the fine educators in our school are supposed to attend each fall, usually the third Thurs/Friday of October. From what I've heard from friends of mine who had gone, usually only teachers at the beginning of their careers or specialized teachers (music, media, art, etc) go -- your normal, everyday teacher who's been at it for 15 years or so is often a no-show. So when we get back to school and I ask Lindsey's techers, "How was MEA?" it's kind of like asking "How was your weekend in the Bahamas?"

This entire concept is new to me because growing up in Wisconsin, if we DID have an educator conference, they didn't close school for it. Why on earth this conference happens six weeks into the school year and not over the 12 weeks of summer is beyond me...but at any rate...

Wayne and I took these same said days off of work and decided to get a hotel room for one night in Brooklyn Park, a suburb about 10 miles north of us. I know it seems silly, but it was less expensive than the hotels that were in Bloomington, close to the Mall of America, and had the same amenities that our kids would love, namely a pool and two queen sized beds to jump between.

I'm thankful we decided to just do one night -- had we forgotten how poorly our kids sleep in hotels on the first night of any vacation? I think we were fooled into thinking they were better sleepers when we were away, because on our last vacation they were really exhausted by the end of the week and slept like logs, but we'd also been away for an entire week. The first night had been brutal, and this wasn't too much better.

They did eventually fall asleep some time close to 9:30 pm, only to awaken at their normal hour of 7 am. This after Marissa was up a couple of times in the night because "Lindsey stole my covers" and "my arms are cold."

The highlight had to be the hours we spent in the hotel pool. The first time we had the whole place to ourselves, and the next time there were a few other families there, who had clearly also had the same idea of a "staycation." One of the dads there with his kids asked us if our girls were twins. Twins! They are 2 years and 3 mos apart in age, thank you very much, even though they weigh just about the same and are only 2 inches different in height. It was rather amusing. His boys were 12 and 14 -- it's amazing the difference a couple of years make at that age, the one was clearly boyish looking while the other was so much taller and broader in the shoulders.

Puberty is amazing -- I can only imagine that as a parent it's like watching your cute little fuzzball Gizmo turn into a Gremlin. You just have to wait it out until the moon goes down, and hopefully at the end of it you have a creature that will at least talk to you between growls. 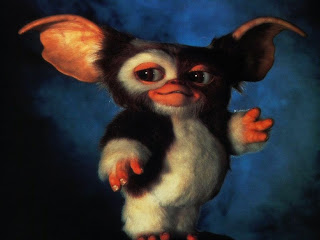 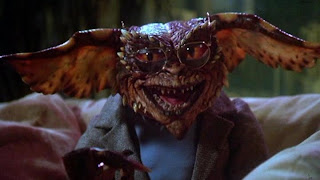 Email ThisBlogThis!Share to TwitterShare to FacebookShare to Pinterest
Labels: Vacation

Last week Friday, when there was no school due to parent-teacher conferences, Lindsey's before/after school program had a hoe-down. They had decorated up the gym with bales of hay and corn stalks. And every child who walked in the door that day received a bandana of the color of his/her choice and a cowboy hat.

Lindsey had LOTS of fun that day, and when she came home that evening she kept saying things like "howdy partner," and having some "vittles." And she keep posing like this too, so I had to take a few pics of it. She clearly had a really good time!

She went to bed and bumped her head...

I decided to check in on the girls one last time as I was going to bed. I checked on Lindsey and saw this:

Yep, she's definitely out, hope Dax doesn't fart during the night, though.

Now how about the other one:

What?! What happened here?! Let me check...is she sleeping?

Yep, she's definitely out. She must've fallen out of bed and just kept on sleeping. So I put her back in bed, which was clearly very disturbing to her:

I'm not sure how, but she woke up well rested the next morning. I told her she had fallen out of bed and she didn't believe me until I showed her the pictures.

Here's a sampling of the questions I was peppered with today by Lindsey as she and I drove to the grocery store:

Mommy, if someone lives alone and dies, how does anybody know they died?

When you die, if you were good all your life, do you get to be an angel?

What if you were bad?

Does being mean to your sister count as being bad, or good? What if you say you're sorry?

What deep questions! I did my best to answer them, and often said things like, "Some people believe..." because some people believe that we all become angels, others believe you go to live with the angels, etc.

I wonder what spurns these questions sometimes. She's pretty deep for a six year old.
Posted by JennyF at 10:07 PM No comments: