This winter has been a doozy. And I can still say "this winter" in late March because it still looks and feels like winter out. Highs of 20 degrees, snow in the forecast, no sign of greenery. The birds have returned, but they seem confused. ("What the hell, where's the grass?!")

The one bonus of all this cold weather is that Lake Superior was 97% frozen for the first time since 2009. This means that all the areas of the lakes that are only accessible by kayak or canoe are now accessible by walking, including the ice caves near the Apostle Islands in Bayfield, WI.

I had to go. This felt like a once-in-a-lifetime opportunity, even though I know the lake will freeze over again. There was just something about it that felt like I needed to take this chance.

For me, this was a chance. I have a great fear of walking on ice over a large body of water. The stories my dad told me as a child of people going through the ice on Lake Superior, and the times he was out hunting with our dog and broke through ice on a marsh must've scared me to the depth of my being. I consider being on lake ice a very risky venture, something I usually avoid.

And yet, to see those amazing caves! Even if I drove up there and then chickened out, I had to try.

On one particular Monday I floated my idea by Wayne, and by Friday I had plans solidified. I would drive as far as Duluth and stay at my friend Junal's house, then Saturday she and I and her boyfriend would head out to the ice caves, another hour and a half east of Duluth.

And so I went.

It was breath taking. I am so glad I took this chance and made the impromptu trip.

The weather was perfect -- about 20 degrees (a far cry from the weeks of below zero and single-digit temps we'd been having), not much wind, and mostly blue sky. We drove to the area, found parking and took a shuttle to Meyers Beach National Park. The caves were about 1.5 miles down from where we first got on the lake, and then they stretched along for over a mile. We could explore as much or as little as we wanted.

The ice was so incredibly thick that my fears dissipated. Most of the paths were packed down snow, but near the caves it was bare ice which was quite treacherous. There had been several falls, and later I heard that the weekend before a woman broke a vertebrae after taking a spill on the ice. (Glad I didn't know that before-hand). 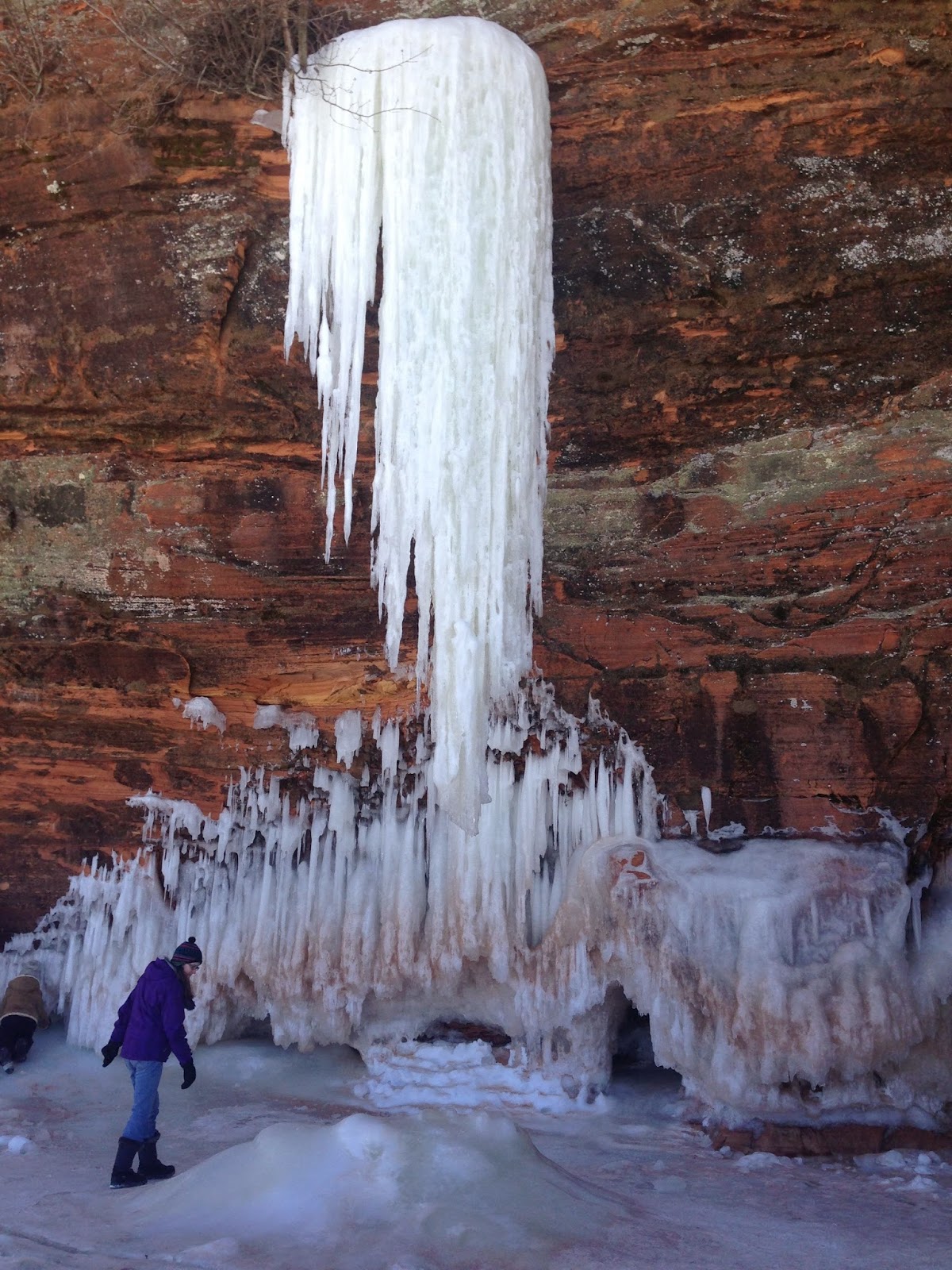 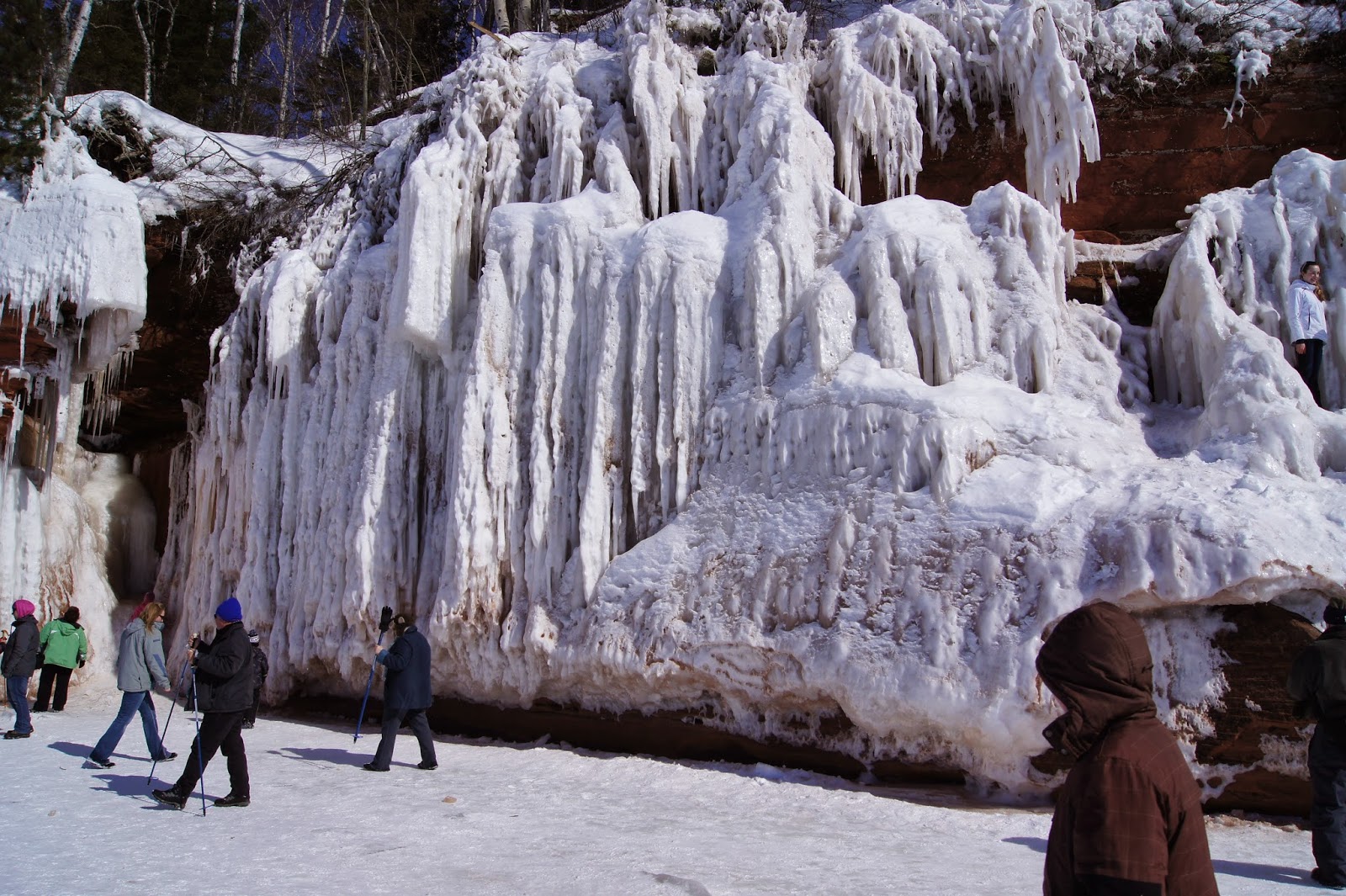 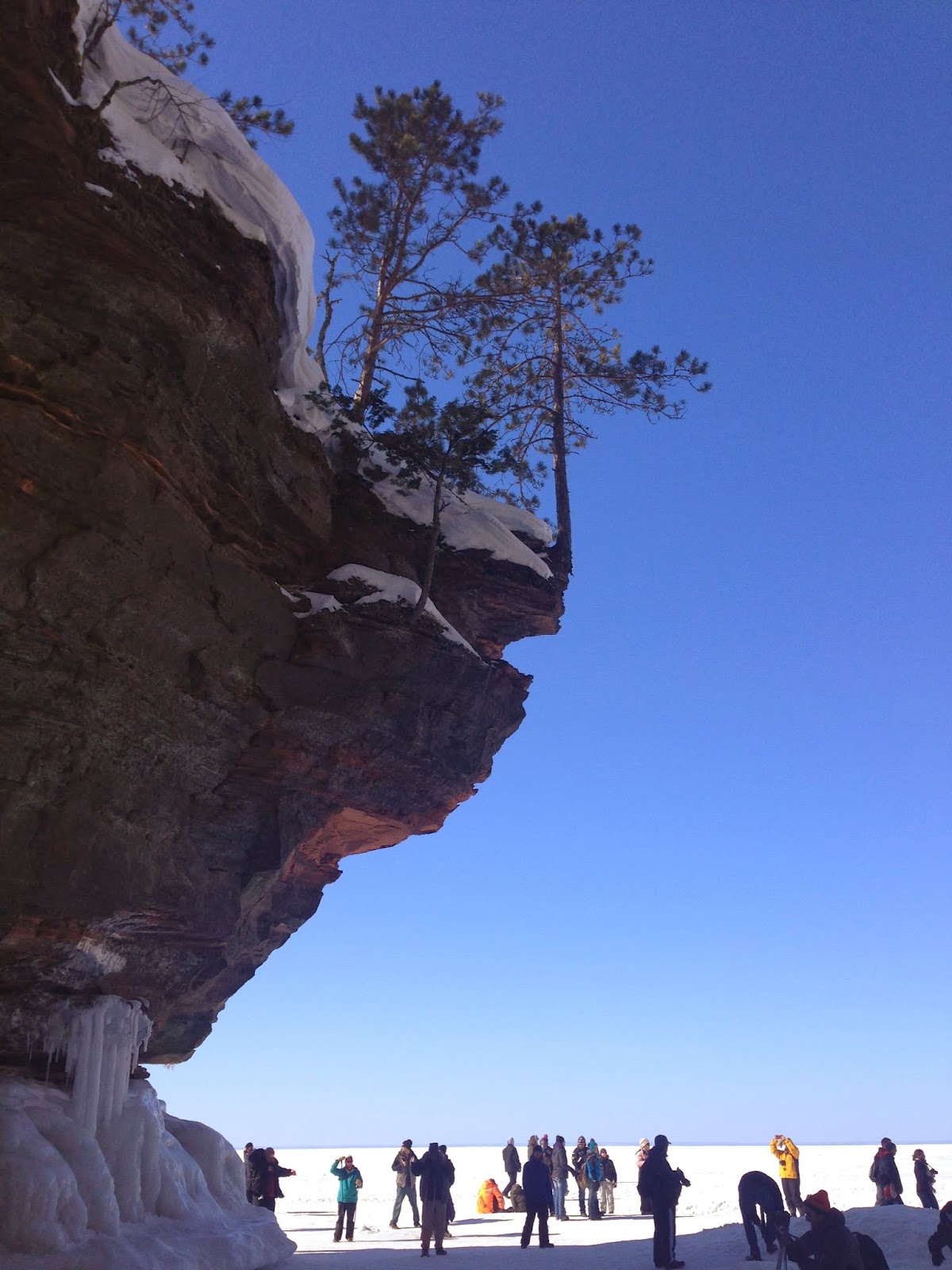 The ice took on incredible shapes, from round globules of amber to spikes of stalagtites that looked sharp enough to impale a person. We explored a small crevice, also a challenge for me, since I get anxious in tight spaces. But it got larger once I got through the opening, and the ice formations inside were spell-binding.

The pictures do not do it justice.


After we explored for a couple hours, we shuttled back to the car and drove to a small place in Cornucopia, population 500, where we could get a burger and a beer. To our surprise they had black bean burger on the menu for the vegetarian among us, and they had locally made "Sassy Nanny" goat cheese that you could add to any burger. Clearly not your everyday small town fare; I assume they are accustomed to catering to people from all over. The goat cheese was fantastic, so tangy and creamy. Cost all of $.50 to add it to my burger, and they slathered so much on I think they were grateful to have someone order it before it went bad.

A burger, a beer and a warm place to rest with good company. Perfect.

We drove back to Duluth and I took off from there back home. It is amazing what adventures a person can have in just 24 hours.

The following weekend was the last weekend of the season -- they closed the access to caves after that. I learned that even though the ice by the caves is still thick enough, ice elsewhere on the lake has melted significantly. This means that you could be standing on the ice by the caves, have a strong wind come along, and suddenly find yourself 3 feet from shore. Or 10 feet, or in the middle of the lake if you weren't paying attention!

In 2009 the ice caves had a total of 8,400 visitors over the entire winter. The day I was there they had more than 14,000 visitors, and over the course of the entire season they had nearly 100,000 visitors to the caves. They chalked up the interest to the fact that it had been 5 years since a good freeze, and many visitors shared their photos via social media, which prompted others to want to make the trek. The biggest challenge was finding parking, so they worked with the local community to plow fields and other areas to create the shuttle areas. The shuttle drivers were all very nice and talked about what a boon to the local economy the caves were. They did such a great job of accommodating the crowds. I hope to see them again another year.
Posted by JennyF at 3:42 PM No comments:

Blessings from the Universe 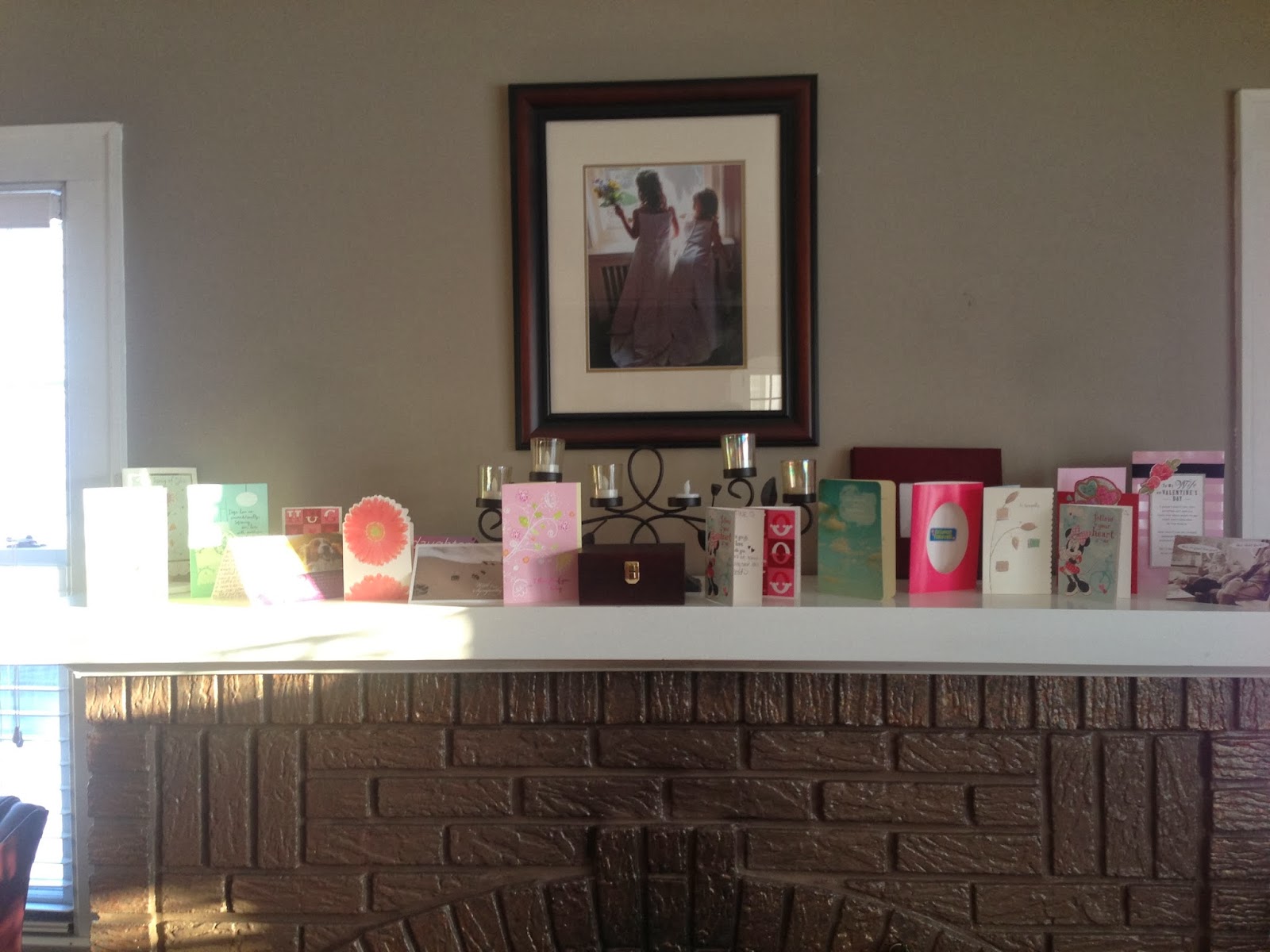 This is what our mantel looks like right now. While there are a few Valentine's Day cards up there, it is mostly filled with sympathy cards from family and friends.

The support we've gotten from everyone in our lives has been overwhelming. On the day we put Dax down a group of friends organized our girls' activities for day, so that they would be out of the house and having fun while things were happening at home.

We had the vet come to our home, a luxury I am grateful we were able to pay for.  She was kind, sympathic, patient and wonderful. I am so thankful Dax was able to pass away in his favorite place; in front of a roaring fire, on my lap. What a gift.

A good friend of mine came to be with me when the vet came to our house. Wayne dealt with Dax's passing by going for a long, peaceful run in the hush of new fallen snow. Without my friend being with me, it would have been just the vet and I. I could never have asked her to be there -- she volunteered.

As strange as it seems, a back injury which flared up the day before Dax was put down was a blessing. It gave me an afternoon to myself at home with him, resting on the couch with ice, a laptop, and a snoring dog.

Earlier in the month, I lunched with dear friends of mine. We've known each other for nearly two decades. One friend gave the others a belated Christmas gift of a CD set of "This I Believe," an NPR series of 5-minute essays. Now we don't usually exchange gifts, and I had nothing for my friend, but she had enjoyed this series so much that she wanted to share it.

What a gift that has been! The essays are from famous and not-so-famous Americans, writing from their heart about the beliefs that guide their lives. It's not religious, and some of the essays are downright quirky. Many of them were so appropriate for what our family is feeling at this time.

My favorite essay is the one recorded by Oscar Hammerstein, famed composer of The King and I, The Sound of Music, Oklahoma! and many other classics. His essay is titled "Happy Talk," and my favorite lines are:

Ultimately, that's what it comes down to: what we are humans choose to focus on. And as I've written before, I choose joy.

Since Dax's passing, I know of two people in my life who have lost a parent. Another has put her father into hospice care, and one friend's sister is battling breast cancer...again.

There are other people and places for me to put my energy now, for me to support those friends not in grand heroic gestures but in simple acts of kindness. My turn to return to the universe the blessings it has showered on me.

Posted by JennyF at 7:40 AM No comments: