Just a Regular Day of Nursing...On A Day Off


My sister is a nurse. She's pretty damn amazing, and cares for people as part of and outside of her job.

One summer day she was biking back to her apartment from our place. Near her building is a bus stop where bus drivers often park their buses and take a break at the convenience store on the corner.

While a bus was sitting there and the bus driver was inside, Kristi noticed a woman sitting on the corner, her legs splayed into the street. She seemed kind of disoriented and was swaying back and forth. Kristi was concerned she was going to fall forward into the street.

Kristi could have just crossed the street on the opposite side and pedaled on her way. Being a nurse, she stopped.

She spoke with this woman for a bit. The woman was slurring her words, unsure of where she was, wasn't even sure of her name. As they spoke, Kristi noticed that she had a medical tag around her neck and she looked at it. The woman had diabetes, and Kristi immediately associated the woman's odd behavior with low blood sugar. 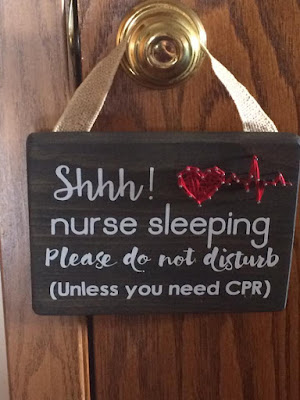 By this time, the bus driver had come out of the store and was going to start his route again; Kristi asked him to call an ambulance. He went back into the convenience store and guess who he called? His manager. Yep, because a metro transit manager can definitely help someone in a medical emergency! The driver came out and talked with Kristi, told her that this woman rides their bus all the time, they often see her, but they've never seen her like this.

Finally an ambulance arrived, and they began to care for this woman. Kristi stuck around to make sure she'd be all right, and the EMTs told her that the woman's blood sugar was 11. I wasn't sure what that meant, but Kristi said that's near comatose; she shouldn't have been conscious. (Normal blood sugar is between 70-130 when fasting, higher after meals.)

They loaded the woman up in the ambulance and drove off, sirens blaring, to get her the medical attention she needed. Kristi biked the rest of the way home and chalked it up to another day.

Later, when Kristi related this story to me, I was amazed. "Do you realize that you probably saved that woman's life?" I said.

"No, not really," Kristi demurred. "Someone would have stopped."

"No, I don't think so. I think people would assume she was an alcoholic, drunk in the middle of the day. No one would have called an ambulance. Even when you asked someone to call an ambulance, they didn't do it right away. If they did anything they'd probably call the cops to get her out of the street."

After a while, Kristi finally agreed that yes, perhaps, she had saved that woman's life. But, she said, "That's my job."

This story has stuck with me even though it happened last summer, or possibly even the summer before. It's because people like Kristi are in the world, people with goodness in their hearts and a willingness to step into uncertain situations, that I have hope for a better tomorrow for all of us.
Posted by JennyF at 9:01 AM No comments:

Creating A Home Base: Other People's Kids

When I was young, my home was not only my home base but that of my friends. My sister could say the same thing. Our home was close to both the junior high and high school. She and I often walked home with other kids in tow and would noisily descend upon our home to consume popcorn, watch movies, play Trivial Pursuit or — gasp — work on homework. Our parents developed relationships with our friends and with their parents. To this day, my mom's close circle of friends is made primarily of couples who were parents of our friends.

I had hoped to create the same safe landing spot for my kids' friends. Our home is within two blocks of the high school that I thought our kids would be going to, but now neither of my girls are going there.

But apparently Marissa's middle school is still close enough to have friends come over often, and I am happy to host them. They are always welcome for dinner, for a movie or to just hang out.

We have a running joke with Marissa's friend, Carolyn. Two summers ago her house was under construction and she was welcome at our home anytime to get out of the chaos at her place. We like to grill steak in the summer, and it so happened that most times that we were having steak Marissa would plan to have Carolyn over. Carolyn LOVES how Wayne grills steak, she would gobble up every bite. And every time she ate with us, we were having steak. It got to the point that if we were going to have steak I'd ask Marissa if Carolyn was available.

One time her parents told us about the time her dad asked if she wanted steak for dinner. Carolyn's response? "No thanks, you don't make it like Marissa's dad does!"

It's been a while but we still laugh about her carnivorous tendencies at our house.
Marissa also has a good friend walk home with her a lot after school. They may work on homework a bit, but usually spend time snacking, chatting and snapping friends. Pretty soon this friend started calling me her "other mother." One time I came home and Marissa was already home with this friend, who called from the front room, "Hi, your other daughter is home too!" She gave me a huge and asked, "How was your day?" We jokingly tease each other about my being her "other mother" and she my "other daughter."

Sometimes she stays for dinner, other times she has to leave to go to hockey or soccer practice. But she and Marissa manage to carve out some time together to joke and laugh together.

Recently Marissa had two friends over and they had bought condoms as a gag gift for a mutual friend of theirs (a guy). He refused to accept the gift, saying that his parents would kill him if they found condoms in his room. So the girls brought the condoms over to our house and played with them. They filled one up with water and tied it shut. It eventually burst and there was a literal waterfall of water in our kitchen. I retrieved towels, handed them out, and they all helped clean up the kitchen. No big deal.

"Thanks for mopping my floor!" I joked with them.

Later I found out that one of the girls lives in a very conservative household. She could NOT believe that not only did Marissa buy condoms and bring them home, but that her mom found out and it was just fine. And...they made a mess in the kitchen but hey, it was just water and it cleans up, so it wasn't a problem as well. She was in shock. "I am never coming to your house again!" she declared. "You guys are clearly a bad influence." She was over later that week, of course.

I hope we continue to be a safe home base for my girls' friends when Marissa starts high school next year. It's been fun so far, that's for sure.