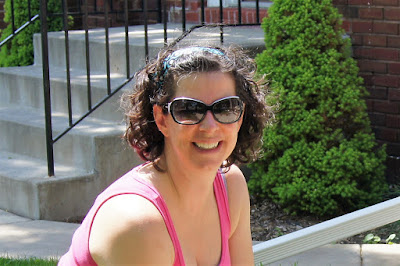 My birthday was Friday. I love my birthday every year, it doesn't seem to matter what number it is. I was fed by my company for two of my three meals, and went out to dinner with my Big Sweetie to Murray's steakhouse, established 1948, and in general had an amazing day.

My amazing day continued into Saturday, when I was running errands. And I mean...errands; a whole lot of running around that had built up over the past few weekends. And I noticed something from the very first stop.

Everyone was soooo nice. I had a consult with an orthodontist and they managed to squeeze me in for impressions for a new retainer. I returned flowers to Home Depot and they gave me a full refund for a partially used flat. At the local vinegar and oil store they gave me a 10% discount because they knew I would bring back the bottles. Caribou Coffee gave me my free birthday drink even though it was only supposed to be good on my actual birthday.

Small things all around, but all day long. What could it be?

Was it some leftover birthday glitter? I think so. After all, I had a smile on my face all day. Every person I greeted was with a smile and a pleasant greeting, which was returned in kind. Plus, it was raining all day long, so stores were generally less busy and clerks were happy to take extra time with shoppers.

I thought about all the posts I've read about men telling women to smile, and how insulting and abrasive that is. Yes, I would never like to be told by anyone to smile, unless that person was a speech coach. Yet smiles can make the day so much more pleasant. Everyone I encounter with a smile has one in return.

I guess that's my Felix Felicis, my lucky potion. My way of making a little bit of the world kinder.

Posted by JennyF at 4:50 PM No comments:

I dreamt I had lunch with my Grandpa and my dad.

It was in my grandpa's small apartment, my mind's vision of some of the places he's lived, merged into a strange concoction of his living space, as dreams tend to do.

The three of us sat around a little table, my father's large frame shoved into a small kitchen chair, his knees hitting the bottom of the table. The meal was peppered with doses of conversation and laughter. I can imagine it was every day stuff, the light that doesn't stay on in the kitchen, the Packers upcoming game, getting the oil changed in a car. Actual conversation was not a part of the dream, just the feeling of togetherness and commonness, of knowing each other so well that conversation isn't needed, just pleasant.

After the meal was done, I picked up plates and started to clean up Grandpa's kitchen. My Aunt Carol walked in, seeming to know when the meal was done so she could help and be a part of the banter. She and I cleaned the kitchen, then we all sat down and visited for a bit. She didn't stay long but popped up and said she had to go back home, and that it was nice to see me.

I awoke with tears in my eyes. Such a lunch was never possible. My grandfather never lived close to my dad and my Aunt Carol at the same time. When we got together with family, it was few and far between and it was a big deal, usually a holiday.

After the sadness passed at having visited with those long gone, I realized that they must have sent me the vision. My father loved his family dearly. He had great respect for his father and reveled in his sister's effervescent joy. Now the three of them are together, probably enjoying heavenly diversions, but the only way I could understand that they're together is by a vision of what it means for humans to commune with others -- by sharing a meal.

My grandfather died in 1996, my Aunt Carol four years ago this past March, my father this past October.  I think this means they found each other and love each other as much now as they did in life.

Posted by JennyF at 5:43 AM No comments: