Fall Reflections on my Dad

This coming October 28th it will have been four years since my dad passed away. I hate that autumn is associated with the loss of two of the most important people in my life, my dad and my fiancé.

No one was more surprised when my dad died than he was. He said he wanted to outlive his own father, my Grandpa Vern, who lived to be 94. Dad was diagnosed with colorectal cancer at age 60 and battled it for 11 years before it finally took him.

Some of my most memorable times with him are from my adulthood. He, my sister Kristi and I became good friends as adults. His visits to Minnesota, Indiana and Michigan with us are some of the silliest, funniest memories I have of him.

In December 2013 my sister graduated from Valparaiso University for the second time, this time with her BSN degree. Dad drove up from Arkansas and I flew in from Minneapolis for the event. Kristi and Dad picked me up in Chicago and we toured the town. Lunch at a little deli, a tour of Willis Tower and goofiness all around. I love the photo Kristi took of Dad and I pretending to descend upon a miniature replica of the Chicago downtown area.

Dad could make any outing special, an ordinary day extraordinary. He saw the wonder in nature, the goodness in people and beauty in the every day world. Once I was visiting he and my stepmom Terry in Arkansas, and he was telling me about a spider he had watched spin a web over their kitchen window. Later that night, as we were getting ready for bed, I hear him call for me excitedly. "Jenny! Come here, the spider's back! Look at this." We turned off the kitchen light so we could see into the night. He and I stood at the window in the darkness and watched the spider, which was outside thankfully, begin its dance. Back and forth and back and forth she swung, creating a web that spanned the entire window. We probably watched the spectacle for half an hour or more. It was finally complete, and we saw her nestle in the center of the web, ready to pounce on any insect that dared enter her creation. She was quickly rewarded and we watched her go to work preparing her meal. By the next morning the web was gone, only to be spun once more the following evening.

He and Terry often took road trips north to visit us and other family, and he made the drive sound like the most amazing trip ever. He spoke of the little cafes they stopped at, the roadside stand where they bought some apples, the kids he saw riding bikes down a sidewalk. He would make up a little story in his head about those people, what they were doing, the relationship between them, and always find something quaint or endearing to say. Later, Terry would confide in me that the café was more like a dive, the roadside stand not quite as picturesque as he made it sound, and the kids looked like they were up to no good. Not that Terry was being negative, but my dad always had rose-colored glasses coloring his world.

Fall was one of his favorite seasons. He would wax poetic about the leaves turning vibrant colors, the industriousness of the squirrels preparing for winter, the chestnuts he and Terry harvested from their chestnut tree. He and Terry celebrated Halloween with all her family, whom Kristi and I call our "southern rellies," with everyone coming together with well-executed and quirky costumes. My sister made it to Arkansas for a few of those parties, they sounded epic.

So...it's that time of year when I reflect on all those wonderful memories and remind myself to be grateful that my dad and I were friends. And I still miss him. 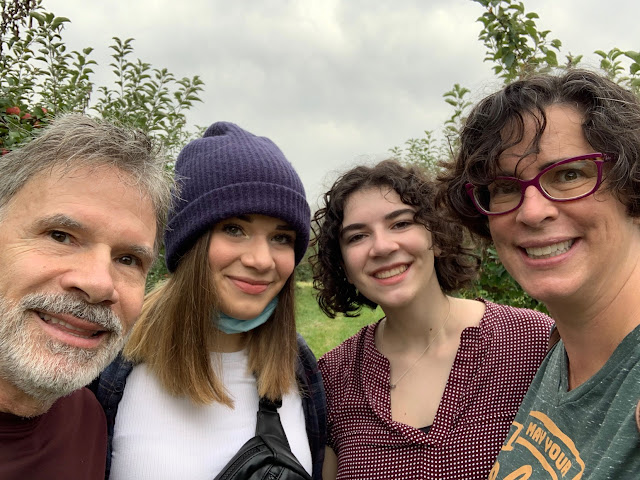 When our girls were younger we used to go apple picking every fall. It was such a fun tradition, everyone excited for a hayride, maybe petting some farm animals, fresh apples and, best of all, homemade apple pie!

As the girls have entered their tweens and teen years, excitement over this adventure has waned. Hay rides? Too itchy. Petting zoo? Too many germs. Fresh apples? Too...healthy.

But this is Lindsey's senior year and if she joins us again next year she'll have to make a trip home from college to join us (at least that's the plan), so off we all went to Afton Apples in Hastings, a place we've visited many times before.

The place was crazily busy — I don't think we've ever seen it this busy before. We waited in a long line just to pick up a bag to pick apples. We walked out to the orchard and found the Haralson's, which make the absolutely best baked goods. 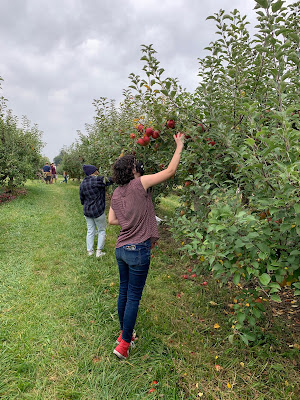 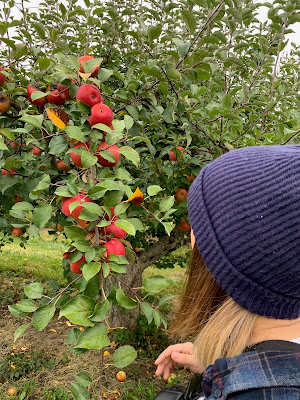 Within a minute Marissa was fascinated by an apple with a rotten gash on it that had a ladybug inside of it. She took it upon herself to free the ladybug from the gooey interior and marveled at it on her hand for a while before it flew off. 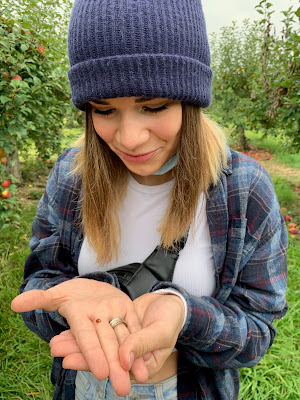 We picked for all of maybe 10 minutes and had two full bags of apples. There is something so satisfying about finding a lovely bunch of apples on a tree, giving one a little tug, and having it easily come away in your hand.

Back to the store to pay for the apples and get some other goodies; a quart of fresh apple cider, some apple and pumpkin donuts, and fresh apple brats for lunch. Delicious.

By this time it was nearly 1:00 and the crowds were too much for the girls, so we took all of our goodies, including our lunch, and ate in the car. As we were leaving the line of cars arriving was longer than when we'd arrived just a few hours before. Glad we went earlier in the day.

Back home Lindsey declared herself "tired" of apple pie, and wanted to try some other recipes. So she made a batch of beautiful, flaky apple turnovers that were delicious. Later on she baked up a batch of apple cinnamon muffins that are the toast of our breakfasts right now. Both of these recipes used a TOTAL of 7 apples — only 1 3/4 bags left to go!

Today we dropped one of the bags off at my friend's house, their family makes applesauce every fall, so we'll be happy to contribute to their supply for that endeavor.

Some day the apples will be gone, but the memories will be there.

Posted by JennyF at 9:13 PM No comments: