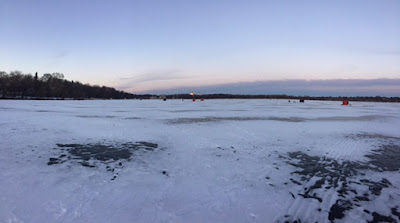 My sister and I took a walk on Lake Harriet at dusk recently. And yes, I mean ON Lake Harriet. Despite the recent warming spell, the ice was still over a foot thick and safe to walk on.

We walked toward the Minneapolis skyline and bandshell. Icefishers were on the ice and in shanties, their boots crunching on the snow, voices echoing over the expanse of ice. 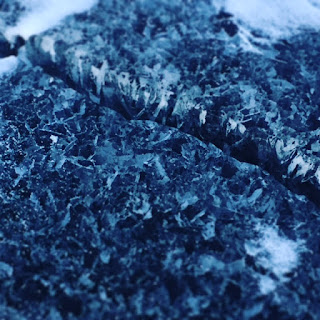 We stood in the middle of the lake and listened to the silence. It was peaceful and beautiful, and broken by a strange sound. It was a pinging sound that started on one side of the lake and made its way around the shore, a high-pitched twinge. We heard it again in a few minutes, and then again. Finally we realized that it was the ice shifting, as it was dusk and the ice was re-freezing after a sunny day.

It was eerie and amazing at the same time. We both thought of my dad, and of how he loved Lake Superior with its alternating strength and stillness. Kristi recounted going to the shore of Lake Superior with my dad after my grandfather passed away 20 years previous, to see and hear the ice shivering between solid ice and open water.

We began to walk off the ice, and stopped for one last look around, hoping for one last ice boom. The final one came from under our feet. It sounded like a glass breaking in slow motion, following by the pinging sound that reverberated around the lake.

It was wonderful to take in the sights and sounds of the lake in the heart of the city.
Posted by JennyF at 7:43 PM No comments:

Standing Up For Each Other

I believe that it is important that we teach our children how to participate in this American experiment called democracy. I'm not going to get into politics except to say that no matter your position, for democracy to work, we have to participate.

So when I heard that a women's march was being organized for the day after Trump's inauguration, I suspected that it would be big. The march wasn't about reproductive rights, or racism, or gender equality, it was about all of those things -- that women's rights are human rights.

Only Lindsey was interested in coming with me. Marissa was worried that people were going to get  hurt; she didn't want to come near it.

After hearing Marissa's concern, and seeing pictures of this sign at the march in California, Marissa's hesitation gave me pause.

This sign was created by Amir Talai, a Persian American actor in California. He has been involved in the Black Lives Matter movement for the past few years; he talks about why he wrote this in this interview by Fusion.

Living in Minneapolis, I've had lots of opportunities to get involved in various demonstrations and protests. Yet I never stepped forward before, nor would I have had my children attend, either.

I had to ask myself, "Why?" The struggles for equal rights is real for people of color -- why haven't I joined them before? It's not that I don't care or haven't considered participating; I have friends who are very involved and they frequently have invited me to join them at various rallies and gatherings.

The answer was easy: I did not feel safe at those gatherings. And not for the reasons you may think.

Let me tell you the story of another march.

This past November, Black Lives Matter organized a march involving Minneapolis Public Schools. Students were invited to take part by leaving their classrooms near the end of the day and gathering in downtown Minneapolis in a route approved in advance by the city. The children of friends and acquaintances took part in this, leaving Southwest High School and walking down the street with signs and banners, then made their way to downtown Minneapolis to join the students from other MPS schools.

Once near the US Bank stadium, on the previously approved march route, police pepper-sprayed the crowd. These are high schoolers, kids from 14 to 18 years of age. My friend's 14-year-old daughter was traumatized by the experience, her eyes swollen shut, her emotions raw from the chaos and fear of the incident.

The media did not cover the peaceful gathering, the police "protection" which turned into violence against the students. It was just another protest by another disgruntled niche of our diverse society.

Need you ask, it was mostly students of color who participated in this march. Their Caucasian counterparts did not join them. If they had, I suspect the police response would have been very different.

In thinking about these two organized demonstrations, I felt safe taking part in a march of what turned out to be nearly 100,000 people, and did not feel safe in a group of 100 people.

This realization told me so much about myself and about our society. I cannot begin to understand to the frustration that people of color feel at being squelched when they protest their treatment. But I can try to relate. And I can stand up for them any way I can, with my voice, my calls to lawmakers and my vote.

Posted by JennyF at 9:00 PM No comments:

As part of Lindsey's 8th grade Language Arts class (the new term for what we used to call "English"), every student was assigned to write a spoken word poem.

The PTA funded a position with a local poet who worked with the students on this art form. They had to learn to use similes, metaphors, rhyming and rhythm techniques for writing an effective poem. Topic? Any of their choosing.

Some weeks ago her teacher sent out an email to parents inviting them to the final performance, which would take place in the classroom. She mentioned that some of the poems got very personal and emotional. I didn't want to inhibit Lindsey or others from expressing themselves fully, so I opted not to attend.

Lindsey threw herself fully into this assignment, with more enthusiasm than usual. She is a huge "Hamilton" fan and has gained a great appreciation for expressing oneself through spoken word.  In the same way I used to go to "English" class and kids now go to "Language Arts," I think that spoken word poetry is the new name for rap. It truly is an art form.

Her topic was on popularity, and why we as people care so much about how others look or dress, instead of what's inside a person.

This week was their performance day in class, and it was clearly the highlight of her day and week.

Some students were moved to tears by the readings -- one student burst into tears after her performance. Lindsey got a great response and applause after her reading. Topics ranged from loss, to a divorce in the family, dealing with a chronic illness, or just plain loneliness. Lindsey learned through this that a girl in her class is bullied by other students before school, though Lindsey has never witnessed it. She now makes it a point to say hello to her every day.

I'm so grateful that our kids get to have experiences like this through their school.

Posted by JennyF at 5:51 AM No comments: