The Definition of Anti-Bullying

My youngest daughter is always full of surprises. She is thoughtful, kind, and feels emotions deeply. Yet that side of her is often covered by an outward facade of carelessness and scattered thinking.

This past summer she got friendly with a boy from her school through a game called Fortnite. She had him in some classes the previous year and didn't think much of him. He often interrupted the teacher with off-topic comments and didn't seem to care for schoolwork. But over the summer they would spend hours on this game, chatting and working together on the various quests. She warmed up to him, and not a day would go by that they wouldn't talk. They never got together in person though, which I found unusual for a friendship. I kept questioning if it was more than friends, but the answer was always the same: just friends.

School started again this fall, and their friendship over Fortnite continued. They didn't have too many classes together this year, so she didn't have much of an opportunity to see him except for lunch. They would sit at the same table, a group of boys on one end, girls on another, because that's how it goes in middle school.

One day he called one of her girlfriends "anorexic." Marissa wasn't there to hear it, but she heard from her friend afterward that he had done this. Her girlfriend was really hurt. She already felt out of place with how petite she was — she is shorter and smaller than all of her friends — and he just reinforced how badly she felt about her body.

Marissa was mad. She came home from school that night and told me about the incident and that she was going to talk to this boy about it. I hadn't suggested this course of action, and internally was doubtful she would have the courage to do it, though I told her it was the right thing to do.

The next day at lunch, she marched up to this boy and said, "Hey, you called my friend anorexic yesterday and you really hurt her feelings." He was surprised. "Women and girls already struggle with their body image and being compared to models all the time, that was a really hurtful thing to say." He hadn't ever heard of "body image" before, had no idea girls struggled with it and that he'd hurt this girl's feelings, and he agreed to apologize to her.

Marissa decided that this boy was not nice for having said such a mean thing, despite the fact that he'd apologized, and she no longer plays Fortnite with him or hangs out. If he did it out of a sense of winning back Marissa's friendship, he didn't succeed. But perhaps he did it because he genuinely felt badly for how he made this girl feel, and will not say something like that to someone again.

Marissa's actions are the exact definition of "anti-bullying," and I am so proud of her for inherently knowing to do the right thing.
Posted by JennyF at 9:10 AM 1 comment: 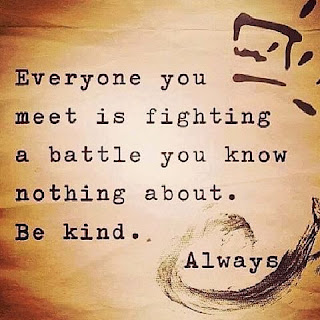 I've run into a certain older gentleman at my local Cub Foods many times over the past few months. He is probably in his 70's or 80's, very spry, and talks to absolutely everyone. He and I have struck up a conversation several times, most recently this past week when Marissa and I were stocking up for Christmas.

He was packing up groceries on one side and I on the other, and he turns to me and says, "Do you know what the difference is between outlaws and in-laws?" A well-timed pause of an often-told joke. "Outlaws are wanted."

He said that people just aren't happy enough, don't laugh enough, and he takes it upon himself to spread a little joy, all year round. I wished him a Merry Christmas and we went on our way.

Marissa and I were commenting about the exchange on the way home. She had overheard him talking in another aisle to another customer about his Christmas plans. His son was having him over on Christmas Eve, he would be spending Christmas Day with his daughter and her family.

"But I'm really looking forward to December 26th," he said to the gentleman. "My wife died 8 years ago, it's just not the same without her. Holidays are difficult."

From all outward appearances he seems happy, spreading laughter to strangers wherever he goes. Yet he harbors grief inside, something that he tries not to dwell on but that is a part of him.

I am thinking of him this Christmas morning and hoping he is enjoying time with his family, while honoring the part of him that misses his wife. People need a little love and understanding, even, and perhaps especially, those who don't appear to need it.

Email ThisBlogThis!Share to TwitterShare to FacebookShare to Pinterest
Labels: Personal thoughts, Self care

An Unfortunate Error In Fashion

Some months ago a friend of mine gave me some whimsical socks. They make me laugh every time I wear them, which I'm finding is more and more often as the weather gets colder. I realized I don't have many socks that are this thick or nice, so I find myself wearing them every time they are clean.

A few weeks ago my daughter and I went to the chiropractor and I realized, after I had laid down on the table with hot pads on my back, that I had worn my whimsical socks. This wouldn't normally be an issue, except that at the chiropractor I always take my shoes off, so my socks were in full display for everyone to see as they walked by my table. Just the thought of this made me laugh, that kind of uncontrollable laugh that you know is not appropriate so you try to stifle it, which only makes you laugh more. I probably looked a sight jiggling away on the chiropractic table.

Eventually the doctor came over to adjust me, and I apologized in advance for my socks. He laughed and said, "Don't worry about it, I've seen all kinds of socks here, with toes sticking out and all kinds of things." He clearly thought I was apologizing for the state of my socks, not for their whimsy.

Eventually he made his way down to my feet, saw my socks and then started to chuckle. "Oh!" he said with a laugh, "Now I know why you were apologizing. That is so funny."

Because this is what he was looking at: 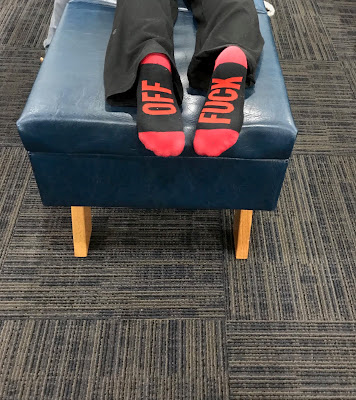 Normally they read correctly from left to right, but since I was face down on the table, they were backwards.

Thankfully he had a good laugh about it and I made a mental note to remember not to wear those to the chiropractor again.

I also went out and bought myself some decent winter socks that don't have words.
Posted by JennyF at 7:10 AM No comments:

What was your first job? Mine was as a dishwasher and busgirl at a local restaurant. I worked there the summer I turned 16, lugging tubs of dirty dishes up and down stairs from the lake where there was a float on the water where customers could be seated. Those seats were quaint and relaxing to enjoy as a customer, it sucked to have to take those steps with a heavy load of dishes as an employee.

Most times I would bring food from home to eat during my break, but once I splurged and ordered something off the menu to eat. When I got that paycheck, I could see that I had worked a full hour to have a full hour's worth of pay deducted to pay for my food. That was the last time I did that, and I was also careful when I spent my money, thinking about how many hours I had worked to earn it.

Lindsey's been wanting a job for a while, but most places don't hire 15-year-olds. The local grocery store hires kids at 15, but she had no interest in working with food in any form.

On a trip to Turnstyle, a consignment shop, the woman ringing up our purchase encouraged Lindsey to apply. "We really need workers before the holidays," she said. Lindsey and I looked at each other and I asked, "Do you hire 15-year-olds?"

Lindsey sought out the manager, we went home and she applied online. She was surprised to get a call a few days later asking her to come in and interview. She interviewed on a Monday and by Friday got the phone call that they could hire her if she was interested. Was she? YES! 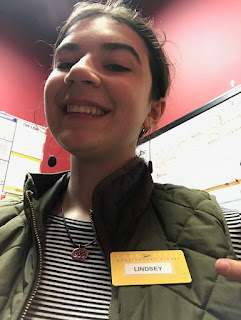 She's worked a few shifts now and she is loving it. Her co-workers and managers are super nice, and there are a few other high schoolers working there as well. She organizes and hangs clothes, tags new clothes that come in, and has learned how to consign home goods. This week she'll be learning how to consign clothes coming in, and she's excited for every skill she learns.

For the most part the customers are nice, and if they have a challenging customers the manager handles it. It sounds like the back room is filled with snacks and nibblies (brought by the manager) for everyone to enjoy.

She got her first paycheck which only covered one shift, and she's thrilled to be earning her own money. She told us that she doesn't need to get an allowance anymore, she's got her own money now.

I am so proud of her for getting out of her comfort zone. It takes a lot of emotional energy for her to interact with the public, it would be so much easier for her to avoid people and just stay home. But she's determined to overcome her challenges, and this job is a perfect fit for her.

Posted by JennyF at 9:01 AM No comments: