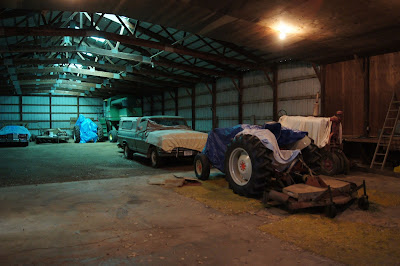 If you stop and listen, really listen, you can hear the life that once was there.

A tractor starting up, its long, slow crank to life. The clanking of tools. A command yelled over the sound of work. Perhaps a word of frustration. 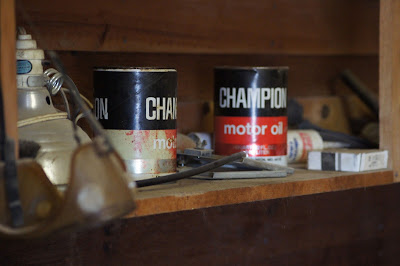 At the end of the day, the doors would pull shut and relative silence would fall over the machinery, interrupted only by the small scuffles of cats chasing mice, or birds in the rafters. 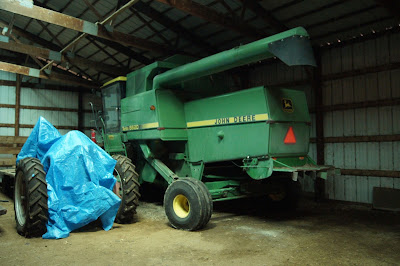 The machine shed is mostly empty now, or at least more empty than it's been in a long time. Favorite tractors have been hauled away, to be cherished or used by other family members. Cars that were in good working order are living their second or third life with someone else.

Two cats remain to keep the mice population down. They are friendly and still call this shed home. Perhaps they will stay when the new owners come, and continue their useful lives for a new family. 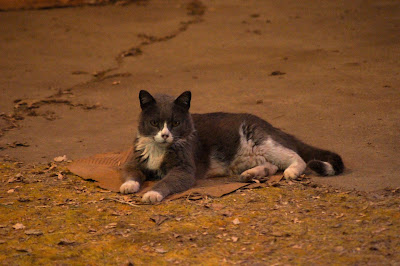 Soon the final pieces will be hauled away, and the shed will be quiet and empty.

Posted by JennyF at 7:04 AM No comments: I walked to the lake and to the fishing dock to see the sunrise.

By the time I arrived the sun was up but clouds were obscuring it. I decided to wait to see if it would eventually break through the clouds.

I watched the sun in an epic battle with the clouds. It looked brighter, then darker. Rays of sunlight escaped and colored the entire sky, then were obscured again. 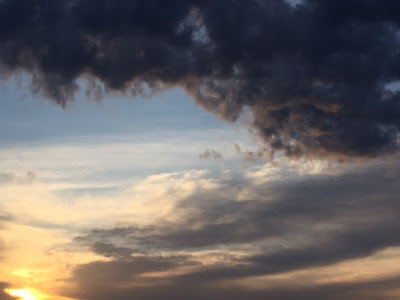 Puffy clouds floated close to me, occasionally lit from beneath by the rising pink light, other times dark with the remains of night. 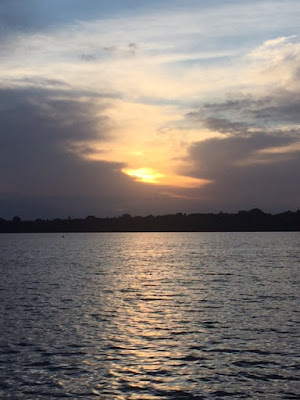 Fish jumped. Seagulls dove. Ducks fluffed their feathers, and geese chased each other across the lake.

It was beautiful, peaceful and quiet. I filled my lungs with air and my heart with gratitude, then looked at my watch to see if it was yet 6:00.

I was in awe at all I had seen in one small, little minute. 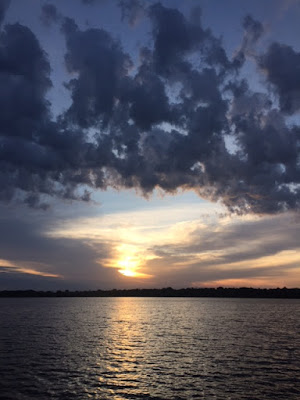 How much more slowly life would go by if we only took the time to enjoy it.

Learning Not to Judge Others

While we are sprucing up much of the house, other parts of it that will remain untouched need a little work as well. The doorknob on our bathroom gets more and more jiggly as time goes on. I fear that one day it will come off in my hand and I'll be stuck in the bathroom. Wayne's tried to tighten the existing one, but it is old and tired and the screws won't hold any longer.

Wayne bought a glass doorknob that looks like others in our home, and started working on replacing the doorknob. He easily got the old one off, but the new hardware didn't fit with the original hardware in the door.

The girls and I were preparing to go shopping just a few blocks from our house. Wayne decided he had to buy a new cylinder that would fit the door, but before leaving for the hardware store, he jumped in the shower and shut the door.

The door with no doorknob.

We were about to leave the house when Marissa noticed that there was no doorknob on the door and that it was tightly shut. "How's Dad going to get out?" she asked.

I inserted the cylinder and used the doorknob from the outside to open the door.

An hour or so later, we are in the dressing room at Athleta and Lindsey is trying on some items.

My phone buzzes and I read a text from Wayne:

Where are you guys? I'm locked in the bathroom.


I respond that we're close by and we'll leave shortly to let him out. I then go to the dressing room door and say, "Lindsey, we have to go, Dad's locked in the bathroom."

"Again?!" she replies rather loudly.

I bet all the people in the dressing room that day thought I married a super smart guy. I have to give him credit for bringing his phone into the bathroom before he started working on the door.

The girls left the store immediately to head home while I bought the items they had chosen, then walked home alone. As I get closer to our house I spy Marissa on the sidewalk walking toward me. I yell, "Did you guys get Dad out of the bathroom?"

And this is why you should never judge people based what you overhear them say.

Posted by JennyF at 6:20 AM No comments:

Learning and Living Through Remodeling 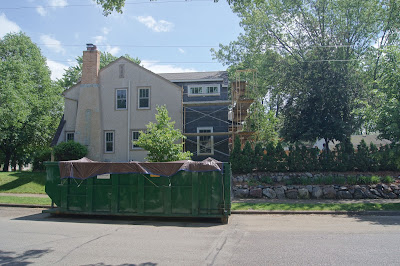 Our remodel project sped along for a month with very little impact to our family. Sure, we couldn't use the backyard, or enter the house through the side door, but for the most part we lived in the home as we always have.

This changed when our kitchen was demolished about a month ago.


Not only do we not have use of a water source on the first floor, but our house is cut in two by way of tarps over the kitchen doors. For the first week, in order to do laundry in the basement we had to go out the front door, back in the house through the side door and down the stairs to the laundry room. Talk about airing your dirty laundry.


The first week we had take-out nearly every night. That got tiring. And expensive.

I spent a weekend morning at my sister's house preparing slow cooker recipes that could go from freezer to slow cooker, and prepping spaghetti sauce that could be frozen and used in small batches. Winner!

We accepted an invitation to dinner at my sister's house, and had a divine and relaxing evening, visiting and eating food she had prepared. Such a treat!

The girls had to move into a bedroom together while Marissa's old bedroom is converted into our new master suite. 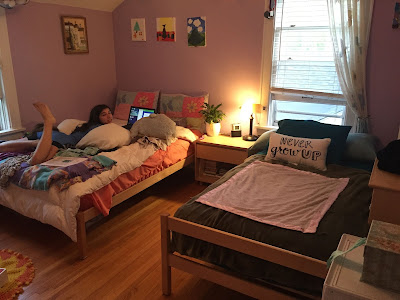 So what have we learned?

1. Gratitude. I am grateful that we have the resources to take on this remodel, to make this home our dream home. Nearly every evening I come home from work to a pleasant surprise. Oh look, they took out the kitchen cabinets! They put the arch up in the new entryway!

2. Appreciation. The crews working on our home have a very high work ethic. The framing crew in particular was incredible to watch. The speed and skill at which they could frame a window was amazing. I remember struggling for hours to put together a dumb shelf in shop class -- they framed a window and a wall in 30 minutes. All of the experts who come through our house do their work with efficiency and skill, and I am humbled by their talents.

3. Neatness. It only takes two items out of place in our "kitchen" to make the whole space unusable. Sure, the girls' shoes are left all over the floor because there's no room in the closet they are sharing, but for the most part everyone understands that they need to pick up after themselves so we can all live in the space.

4. Creativity. I learned how to cook pasta in a microwave, we've improvised a pantry out of a dresser, and discovered all the kitchen essentials aren't really essential when you don't have a kitchen.

5. Tolerance. The girls are getting along in their shared room better than I had expected. I hear them chatting together at night, and they negotiate the use of a favorite lotion or book. While I know Marissa will be excited to move into her new room, I suspect that both of them will be a little sad and miss the camaraderie of sharing a room.

Posted by JennyF at 6:53 AM No comments: