I'm sitting in my backyard with the fire pit burning, a dog snuggled up next to me and the quiet sounds of urban wildlife settling down for the night. The sun is slowly setting, we can see it through the little window where our trees open up to the west.
Three blocks from us, our local shops are boarded up. The grocery store closed at 5 p.m., the liquor store closed last night at 6:30 p.m. and will not re-open until Tuesday.
The jewelry store down the street is also boarded up and the message "all jewelry has been removed from the premises" spray-painted across the plywood.
Our Walgreens, the one where Beauty is so beloved by all the staff members, was broken into two nights ago. One of their doors is covered with plywood. They are open for business because people need their prescriptions, but they, too, closed early.
It feels like the calm before the storm.
Our family is feeling helpless — we wish we could do more, so we started looking around to see how we could help. Local food shelves are now serving families whose local grocery stores were damaged or are closed anticipating violence. A Minneapolis public school in the 3rd precinct, where all this began, needs help getting food to their low-income families who would normally still be getting free lunch food. So Lindsey and I wrote down the list of what they needed and decided to buy the items, put together the food bags and drop them off tomorrow.
The line at our local Lund's of people waiting to go in to shop was out the door. The grocery store was closing early and still limiting the number of people in the store due to social distancing. So we decided to drive further out, to Bloomington, to shop for these families in need.
The store in Bloomington was also closing at 5; we got there around 3:30 p.m. The lines to check out snaked all the way to the back of the store. It took us two hours to get the groceries needed that we'll donate, as well as the few we needed for ourselves.
One woman was there to get grocery for her sister, since her sister lives in the area of the protests and can't get to a store. Another was stocking up just in case the store there was a target too and she wouldn't be able to get groceries later on. And then there were people like us, who thought that driving to Bloomington was far enough away for us to avoid a crowd. Silly us.
It is so frustrating that just as our businesses were opening back up,after months of being closed due to the pandemic, they are closing again due to civil unrest. Salons that were going to be opening on Monday aren't any more, nor are the restaurants and bars that were set to open June 1. This could send some small business owners over the edge financially.
All Minneapolis residents are under curfew start at 8 p.m. It is estimated that 10,000 agitators from out-of-state are in our city now, causing chaos and using this unrest as a cover for looting and destroying our city. In today's press conference, Mayor Melvin Carter of St. Paul said that of the 120 arrests that took place in St. Paul last night, 100% of them were from out-of-town. Gov. Walz says that their surveillance is estimating that 80% of the protestors are not from here, many from known white supremist groups.
I am saddened by what is happening, moreso because we seem to go through this cycle every few years. Brutal murder, followed by outrage, followed by a promise for change, followed by a slipping back to old ways, followed by a brutal murder. And the fact that white supremacists are using this opportunity to besmirch the work of the black community legitimately protesting yet another unjustified death in this country angers me to no end.
I hope for peace. I hope for change. I hope for equality for all and protection under the law.
More later. Thank you for reading.
Posted by JennyF at 9:40 PM No comments:

From "Stay Well" to "Stay Safe"

On Monday of this week a black man named George Floyd was pinned to the ground and a white police officer knelt on his neck with his full weight, asphyxiating him until he died. A crowd of people gathered and cried mercy on his behalf to deaf ears. 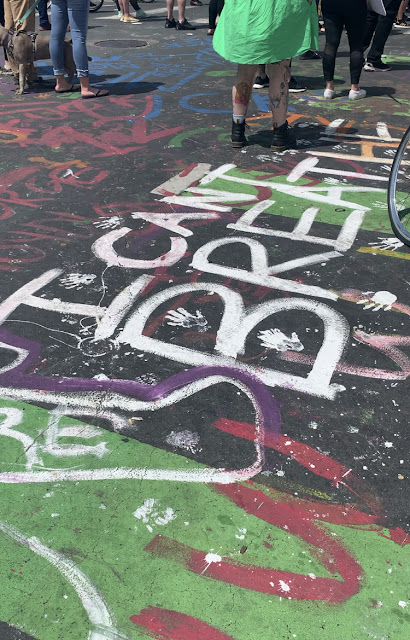 George had been accused of forging a $20 bill at a local grocery store. He was unarmed, was already in handcuffs and had been placed in the back of the squad car. He was then removed from the vehicle, placed on the ground and the officer placed his knee on his neck for nearly 9 minutes. George stopped moving at 3 minutes in. The officer didn't remove his weight from George's neck until after the ambulance showed up and the gurney rolled out.

The gross abuse of power was captured in a 10-minute video shot by a 17-year-old girl on the scene. I cannot imagine the horror she experienced as she watched a man lose his life through the lens of her phone.

We are on night three of what we expect to be protests and riots. The first night was bricks through car windshields, some minor damage. The next night an apartment complex under construction was burnt to the ground, as was the local Target and AutoZone. Other businesses were broken into and looted. Last night the 3rd Precinct building of the MPD was set on fire, along with a host of other businesses. Violence is spreading to St. Paul and the suburbs, and solidarity in other cities is resulting in protests in Los Angeles, Denver, New York and more.

At first I was angry and frustrated why communities respond to injustice by looting and hurting business owners who live in their neighborhoods. But then I read a few things that made so much sense to me, this one makes it the easiest to understand:


"A riot is the language of the unheard." — Rev. Martin Luther King Jr.

This was first said in a speech on April 4, 1967 called "The Other America" given at Stanford University. He paraphrased this and used it in many interviews until his death exactly one year from when he first spoke them.

His full speech can be found here. It is disheartening that it is just as relevant today as it was when it was first delivered 53 years ago.

I read about the work of MPD150, which did a comprehensive study of the history of the Minneapolis Police Department over the past 150 years. Its roots in racism are deep, and its culture has not strayed far from those roots. Their comprehensive report, released in 2017, makes a powerful case for defunding the police department and diverting those dollars to community organizations that can help reduce poverty, address mental health and drug dependency and other issues that will make communities safer, thus reducing the need for police patrolling.

I also perused this sobering dataview produced by the Star Tribune of every death after a physical confrontation with police across Minnesota. They documented the race of the victim, of the officers, whether or not weapons were involved, and the final result of justice, be it charges or a conviction. It doesn't take long to see why George Floyd's unnecessary death is the final straw.

Finally, I began learning from the Hampton Institute, a think tank in D.C. providing analyses on a variety of subjects affecting the working class. And they had this to say about the events in Minneapolis: 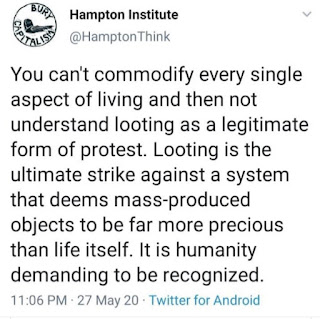 This event and the fallout has been the only talk of our home for a couple of days. The girls and I have talked about our society, white privilege, the history of oppression and what it would take to fix it all.  Today Marissa and I visited the corner where George was murdered to pay our respects and be with others who feel this loss upon more loss. We don't have answers. But blacks in this country have waited too long to no longer be oppressed, to not be killed for driving while black, jogging while black, shopping while black.
I am using my voice to call our officials, speak out on social media, and support the fight for justice and the end of inequality. I'll be supporting local organizations as well which are working to fight for change by donating to Communities Against Police Brutality, Minneapolis FreedomFund, MPD150 and others.

Please, educate yourself by following the links in this article. Here's a listing of other resources:

"The Warmth of Other Suns," Isabel Wilkerson
"The New Jim Crow," Michelle Alexander
"I'm Still Here: Black Dignity in a World Made for Whiteness," Austin Channing Brown
"The Hate You Give," Angie Thomas
"Evicted: Poverty and Profit in the American City," Matthew Desmond
"13th," and "When They See Us," documentaries by Ave DuVernay

Turning 17 in the Midst of a Pandemic

Lindsey turned 17 this month, during social distancing, essential trips only, essential businesses only, a looming recession.

The best part of the day by far had to be the flamingo flock in our front yard. It was placed there overnight, so when we woke up in the morning and looked out the windows, surprise! A flood of pink. She was shocked.

We planned a gathering of her friends with a "Nailed It" challenge. "Nailed It" is one of her favorite reality shows, with the hilarious Nicole Byers as the host. People who have absolutely no business being in a kitchen are given extravagant, professionally-designed cakes to recreate in short amounts of time. The results are, let's just say, hilarious.

I contacted a local baker who was willing to make us a single fondant sculpture on a cupcake as an example and provide the supplies for the girls to attempt it themselves. Normally she wouldn't take a job of this size, but with the pandemic and everything, no one is really gathering anymore, so she was willing to take the job.

We set up work stations outside so that the girls weren't in the house. They did have to go in to wash hands every now and then, but otherwise people were outside. They had a blast trying the challenge, I was actually impressed with what they came up with! They had such a great time.

It's hard to believe that a year from now we'll be planning a high school graduation. How these years have flown by!

Posted by JennyF at 3:45 PM No comments:

Lindsey needs to get 50 hours of practice driving in before she can take her driver's test. This includes 15 hours of nighttime driving. We're not sure when she'll be able to take the test since the DMV has been closed due to the pandemic, but whenever they re-open, she'll be ready!

This has been a perfect time to get practice driving in for Lindsey. There's no such thing as rush hour and she can practice driving Uptown and other places at night and they aren't too crowded. She's got an app that tracks her time and the kind of driving she practices.

This past week we went for a drive and before I know it 30 minutes have passed. I checked her app and said, "Wow, we've already been driving for 30 minutes! Feels like so much shorter than that."

She replies, "That's because I'm such a delight."

We both laughed so hard she almost had to pull over.
Posted by JennyF at 10:52 AM No comments: