Most couples have some sticking points on things that really aren't worth arguing about. Toilet seat up or down? Squeeze the toothpaste from the end or the middle? They become daily annoyances but in the great scheme of life, really aren't worth arguing about. That's why Wayne and I have these arguments without words. Because the few times that we finally do get a chance to sit down and talk, we'd rather not waste our time talking about these petty arguments.

A recent silent argument we had was about how to store those nifty S'well bottles. Our kids love them, our youngest keeps asking to buy different ones of different styles. (Isn't the point to buy just ONE so you don't create waste?) The bottles have to be hand-washed and every time I put them away I store them with the caps off, because if we store them with caps on, the little tiny bit of water that is in the bottom will mold in the bottle. Yet every time I go into the cupboard where they're stored, the caps are tightly fastened onto each bottle.

I know who's doing this, and it's not the two teenagers who can't be bothered to pick up their socks. 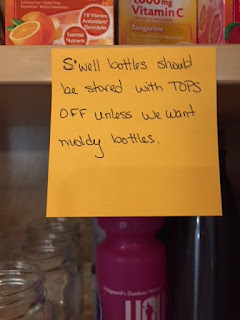 Finally, the caps stayed off the bottles. After a while the note disappeared, I assume because Wayne was tired of being reminded every time to NOT put the caps on.

Next up: the chair in our bedroom.

It's a beautiful chair, we both love it and love the fabric. It is super comfy and gets used practically every day. I especially love the snuggly throw that I bought to go with it. In the winter you can find me on that chair with the throw over my lap, a cup of coffee and a book. Heaven!

I like it casually draped over the chair. (After all, is it not called a "throw?") To me, it says "Welcome! This chair is for you! Sit down, wrap up and get cozy."

Wayne thinks the blanket looks messy this way. He likes it neatly folded. But...why? A neatly folded throw says to me that the chair is for appearances, not for sitting. This was an actual discussion that we had one time, because I found the folded blanket on the seat annoying. You always had to move it to sit on the chair, while with the blanket thrown over the edge you could sit on the chair for a few minutes to put shoes on and not have to worry about moving it.

So he stopped folding the blanket. But then he started doing this. 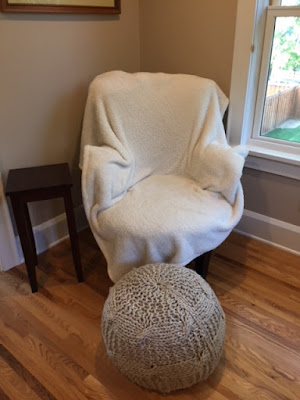 To me, this says that we are embarrassed about the chair. It must be ugly, worn, have big holes in the fabric because we don't want you to see the fabric, we want you to sit on it anyways despite its probable nasty appearance underneath.

If this chair could talk!

But here's the thing: I don't have a logical argument for this one. The S'well bottles, that just makes sense, we don't want moldy, stinky bottles. But the blanket? This is just a matter of opinion, and we both think we're right.

And so, I turn to you, dear reader. Which way shall we store the throw on this chair?