All in all, we had a good Thanksgiving.

The holiday first began with Neil & Millie coming to our house on Wednesday evening and staying for the big feast on Thursday at our place. We tried a turkey breast instead of a full turkey and it worked out pretty well. We always threw away the drumsticks anyway, seems a waste to cook a whole bird including all the parts that we just don't eat.

Unfortunately Marissa was under the weather -- I ended up picking her up early Wednesday and taking her to the doctor as she spiked a fever of 102.5 at daycare. She was put back on an antibiotic for 20 days to help knock out what appears to be another pesky sinus infection. Her nose cleared up right away, but we'll see if it stays after the antibiotics are done.

So on Thursday she was a big crank for much of the morning. She was crabby, clingy and liked to pester her sister, resulting in lots of refereeing. So we decided to move up the timetable and had the Thanksgiving feast while Marissa was napping. I felt kind of guilty, planning for her to not be a part of it, but it was a nice break to actually be able to eat my meal and not get after her to eat, not throw food, put her in a timeout, etc, which is what probably would have happened. Lindsey was well-behaved at least, though she didn't eat much. Marissa took a 3 1/2 hour nap and woke in a much better mood, and didn't seem to care that we had forged ahead without her.

We then all trekked down to Tracy, MN on Friday to gather with the entire family on Saturday afternoon for another feast, this time on cheesy potatoes (yum!), stuffing, sloppy joes (or "barbecue," as the Minnesotans call it) and a myriad of pies, including a pumpkin cheesecake that I had made upon arrival there. Nicole brought two large pans of Rice Krispie bars with chocolate topping -- only four survived the onslaught of hungry relatives.

Nicole also brought lots of photos of her album in August which we had missed due to both girls being sick that weekend. It sure was nice to look at all the photos. Everyone looked absolutely gorgeous (and the men were dashing) and it looked like everyone had a lovely time.

Sherrie brought over a belated birthday gift for Marissa, whose birthday was back in July. She got her a play vacuum cleaner, and was that a hit! Marissa would point around the entire living room and say, "this alllll yucky!" and proceed to pretend vacuum it. She also took out the attachments and would get under the coffee table, get the couch seat and arms, etc. Too bad the thing doesn't actually work!

She got into such a cleaning frenzy she also grabbed a little stuffed animal piggy and started "dusting" the furniture with it! It was a riot to watch.

She and Lindsey had to take turns with the vacuum, and later when Sherrie asked Lindsey what she wanted for Christmas, Lindsey said, "A vacuum like Marissa's!" I'm pretty sure we don't need two of those things around; they will just have to get better at sharing.

The one downfall of traveling with little ones at this age is the sleeping arrangements. We tried having all four of us sleeping in one bedroom, resulting in multiple awakenings, moving an offspring from airbed to actual bed, back to airbed, etc. They just get so disjointed when they are out of their routine and out of their normal surroundings.

The second night we got it a little better and Marissa and I slept in the family room while Wayne and Lindsey slept in the bedroom. Marissa would still awake a few times throughout the night, look around and start crying at the unfamiliar surroundings. But at least I was right by her side to comfort her and she would go back to sleep immediately, as opposed to the previous night when she would fully awaken and it would take us some time to get her back to sleep. That worked out much better, though I didn't get much sleep on the couch. I found out the next morning that the couch actually has a pull out sleeper, so that may be our salvation for our next trip!

Now I can't believe that it's only a week to December, and I am not ready! I haven't even started thinking about designing our Christmas cards. I do have a few presents already purchased, ready to wrap and ship to their recipients, but much more ahead of me to do.

With the stores in the Twin Cities being absolute chaos on the weekends, all I have to say is, "Thank God for Internet shopping!"
Posted by JennyF at 9:33 PM 1 comment:

Thanksgiving is the one holiday that I am pleased to wish everyone a happy one of. I don't have to worry if you're a Christian and actually celebrate it, I won't offend your offenses if you're Jewish, if you're a Muslim it's OK too. How about Jehovah's Witness? Mormon? Doesn't matter. Here's what matters:

1. Are you currently in the US? Do you enjoy freedoms here that you may not have elsewhere?
2. How's your health? Had leprosy lately? How about the bubonic plague? Good to hear that you are plague free!
3. Do you have family in your life that you are thankful for? Parents? Siblings? Children of your own?
4. How about a roof over your head? Food to eat? Clothes to wear? Even if you're poor, if you live in this country you probably have all of the above.
5. Have any friends that you like? That support you in times of need? Yep, they are pretty special too.

So if you have anything that you can be grateful for in your life, I wish you a happy and heartfelt Thanksgiving!
Posted by JennyF at 12:17 PM 1 comment:

Lindsey has been bugging us for about a week to get a haircut. And not just a haircut, her description was, "I want it short like Marissa's."

When she first asked, Wayne's knee-jerk response before he could even stop himself, was to say, "Oh but Lindsey, I love your long hair." (I thought that was pretty sweet coming from her Daddy.)

I like it too, and had thought that it would be in ponytails, pigtails or up moreso than it is. Even if I do send her to daycare in some kind of pony/pigtails, they always come out at naptime because they are uncomfortable to nap in, and then she spends the rest of the day with her hair flying around her face. And she often fights having her hair combed, resulting in some nasty tangles.

For those two reasons she didn't have to wait long after bringing it up again before she and I took a walk down to the local Great Clips, where she got about 5 inches taken off in an inverted cut. The front of her hair just about touches her shoulders, and the back is at the nape of her neck. She was smiling and grinning the entire time she was getting it cut, and afterwards said how happy she was with it.

I wasn't able to get a picture of her today, since she only had the cut for a few hours, but I'll try to get one soon to post it. I do say, it is pretty cute on her, and hopefully lower maintenance than her long hair.
Posted by JennyF at 9:53 PM No comments:

This has to be one of the most heartwarming storeis I've seen of late. Much needed considering the other news that we usually see on the news.

Posted by JennyF at 9:21 PM No comments: 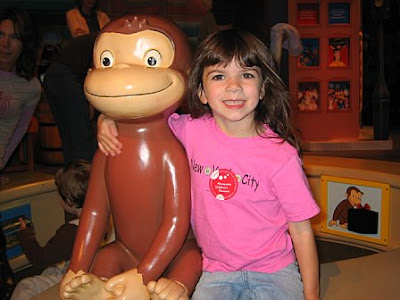 Thought I'd quickly post a photo from this past weekend when we visited the Minnesota Children's Museum. They have a Curious George exhibit that the girls enjoyed.
Posted by JennyF at 11:16 AM No comments:

My Halloween Costume Confused Many...

I felt ridiculous on Halloween with my hair done up so high like Amy Winehouse. For those of you who don't know who I was attempting to be, you can see that my hair did not nearly reach the heights needed. 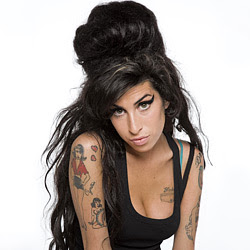 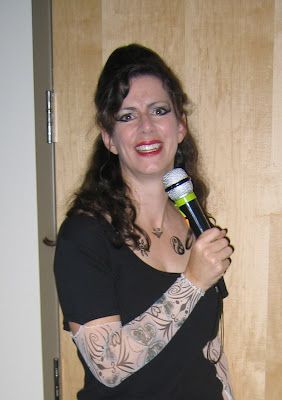 Posted by JennyF at 9:11 PM No comments:

I Am An Addict...of sorts

For those of you who know me well, this may come as no surprise.

I have finally come to the conclusion that I am an addict. I can't help myself every time I pass a place that serves them. I see people holding cups in their hands and I become envious. I wonder how late in the day I can get away with having one and still get to sleep at night.

These are all true statements -- honestly! But I'm happy to report that the object of my addiction is somewhat benign.

I am addicted to Caribou coffee.

And I'm even becoming a coffee snob and preferring Caribou over every other type of coffee, including Starbuck's.

I am a very lucky soul.