Laughter. Talking. The tinkling of glasses.

I awoke from a dream  -- the most bittersweet part was the awakening.

In the dream my dad, his two sisters and their husbands were all sitting around in the backyard of Carol and Chap's house. (Their house in Illinois, which they sold more than 30 years ago.)

The sun was shining and they were visiting and laughing. From Phyllis high titter to my dad's big guffaws, a time was being had, as my dad would say.

Phyllis sent me in to make her a new drink, something that never happened at these gatherings. I think everyone knew better than to send Tom's youngest daughter to make a drink. Phyllis gave me instructions, I went into the kitchen and of course botched it. In a typical dreamlike event, I put a cinnamon roll in her drink because, of course, cinnamon rolls are often garnish in drinks. It soaked up all the liquid and made a disgusting mess.

My sister Kristi came in, made a face at the mess I was making, fixed a proper drink and brought it out to Phyllis while I cleaned up.

The laughter and visiting continued.

I awoke with a smile on my face and a lump in my throat. Phyllis and Pete are still living -- this vision is incomplete without them. I feel an urgent need to call them, yet it was 5:00 in the morning. I waited until daylight -- they are doing just fine.

They know how much my dad enjoyed his time with them. Somewhere there is sunshine, a chair, a proper drink and company waiting for them.
Posted by JennyF at 8:19 AM No comments:

A Wake of Our Own

My dad was initially diagnosed with colon cancer in 2007. He has been battling this disease for 9 years. Yet the day he died, we were all surprised at how "quickly" he went.

Kristi and I were the only two in the hospital when he died. Terry thought she would be by his side, but he decided that was not to be. We called Terry and asked her to come back to the hospital because he had passed. We cautioned her not to drive herself; she was too distraught, so she should get another family member to drive her.

Kristi and I made a few phone calls to family members on Dad's side; his sister, who had just celebrated her 90th birthday, my mom (his ex-wife), and others. And then we waited.

We sat in the room with dad's body for almost two hours. We could feel his skin cooling, saw his face draining of color, his fingernails turning from blue to white.

We marveled at his passing. It was just incredible that this had just happened. Stories were exchanged, tears shed, laughter shared.

And Dad had to have the last fart joke.

At one point his body passed some gas through his stoma. I looked at Kristi and said, "Was that you?" and she pointed to Dad.

Shortly after, she did indeed pass a little gas, and pointed to Dad again. "Sure," I said, "Blame the dead guy." We laughed through our tears. I'm sure Dad was laughing with us; he loved nothing better than a good fart joke.

We had become accustomed to his deathly presence. When the rest of the family arrived, some walked into the room cautiously, afraid of what they would see. Kristi and I welcomed them in. "Come, see Dad. He would want you to say good-bye."

We were two hours into the grieving process; others were just beginning. She and I had been holding a wake, just the two of us, while the rest of the family was just getting confirmation that he had passed.

It is amazing how quickly our human minds become accustomed when faced with the physical proof of death. My dad's spirit was no longer in his body. It is wherever we believe it to be, whatever gives us peace.

Now the process of grieving and of healing can begin.

A Story of Photographs 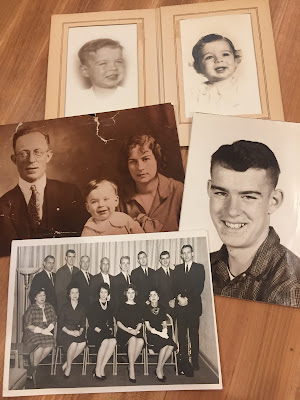 Kristi and I spent some time the past few days going through the photos my dad had collected over his lifetime. He never threw out a single thing, be it a broken tool he was going to fix some day, a pair of jeans with a rip in them, and most certainly never, ever photos.

Years ago, Mom told me about the time when Dad was in the army during the Vietnam War. He would write her letters and include photos of the sunrise or sunset over the ethereal, foreign-looking Korean landscape. Never any photos of him, his fellow servicemen or the camp they were in, just endless pictures of the sun.

Kristi and I came across entire rolls of photos of flowers, bushes, trees, gardens, and dogs. The only person he took photos of with any frequency was he beloved wife, Terry. He always wanted to take pictures of her working around the yard, and then would ask her, "Why don't you take pictures of ME when I'm working?" She found it curious that he wanted her to photograph him at his dustiest, sweatiest self. She would rather that he captured her at her finest, freshly showered with hair and make up done. Instead she has photos of her gardening, painting, cleaning and other chores.

After Lindsey was born in 2003, Dad drove to Minnesota alone to visit his first granddaughter from his own children (by this time he had several step-grand kids on Terry's side). Wayne and I had been living in our Minneapolis home for only 9 months, and Dad was fascinated by our neighborhood. He couldn't believe that we could walk to so many places, were so close to the lake and had such a quaint, charming home.

He took pictures of flowers growing in our neighbors' yards. He photographed their homes, the street, the outside of our house, and, finally, the second-to-last photo on the roll, one solitary photo of his granddaughter. The last photo was of our dog Dax.

This was back when you had to wait to develop a roll of film to see what you'd taken pictures of, and he laughed when he realized he only had one photo of his new grandchild.

"Well, how come people take so many pictures of babies anyways? It's not like they change or anything," he joked. "You know, if I make a trip up there once a year, in 18 trips I'll be attending a high school graduation."

He didn't quite make it to her high school graduation; Lindsey's still 5 years away from that milestone. But I can guarantee I'll be taking pictures of trees or shrubs on her graduation day, in honor of my dad.