When NOT to Tell Someone You're Doing "Well" 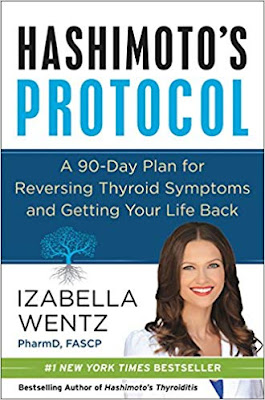 The year I turned 40 I was diagnosed with Hashimoto's disease. Oh My God!! you say, are you okay?!

I'm so okay I forgot to mention it to some members of my family.

Hashimoto's is an autoimmune disorder in which your body attacks your thyroid, reducing the amount of hormone produced naturally by the body. The treatment? Take safe and common hormone replacements to bring the body into balance. But also see your endocrinologist often for a simple blood test in which your hormone levels are monitored so your doctor can determine when you need to step up the hormone replacement dosages, because your body keeps attacking your thyroid until you need full replacement hormones.

For six years I have been seeing my endocrinologist, and once had him bump up my dosage. And then, two years ago happened.

In fall of 2016 at my regular check-up, I reported that I was feeling tired and run-down. I could nap every day, was tired every afternoon, stopped working out because I couldn't get myself up at 5 a.m. anymore to fit it into my day. My chart indicated that I had gained 7 lbs in one year, probably a combination of fewer workouts and more sleeping. But, my dad had also just passed away, which added a new level of stress to life, making all of the above explainable as well.

They drew blood for the blood test, and a week letter I got a letter that my levels were within normal range, and that based on my report the doctor did not see a reason to make an adjustment, see you next year.

I found myself back the following November, giving the same report: I'm tired. I sleep a lot and could sleep more. I don't have the energy to work out. And my hair was falling out in copious amounts. I could see my scalp through my hair and it was devastating. Others said they couldn't tell, but I could and it bothered me.

I had also read the book "Hashimoto's Protocol" by Izabella Wentz, a pharmacist who self-diagnosed her own Hashimoto's in her late 20's. When she reported to doctors that she had no energy she was told that "people slow down as they age." She retorted, "Really?! 29-year-old's slow down?"

This time I had the blood draw done in advance so we could discuss the results at the appointment. But the doctor (and truthfully, I) forgot that I'd done that so we didn't check the results. The doctor walked into the room and said, "Hi how are you?" To which I replied, "Well." Because, as the CEO of a company I used to work at says, replying by saying "good" is not proper grammar. (I partially blame him for my two-year mistreatment.)

I then proceed to tell the doctor of my woes. I'm not sleeping well and can't sleep enough. My hair is falling out. I lack the motivation to work out. My thinking is fuzzy. I am sluggish and can tell I've gained weight. This year's report? Another 11 lbs, 18 lbs in total in two years. I have never gained this kind of weight in my life in such a short period of time. Does this sound like me? No.

He informs me that hair loss is not a symptom of Hashimoto's, nor is the kind of insomnia that I experience.

Really? It's all over in the support groups, the book I'd read, anecdotal stories others with the condition had told me. Well, he informed me, RESEARCH indicated that it wasn't, despite all of that "other" evidence.

He does a blood draw, because I stupidly forgot I'd been there the week before for a blood draw (it was an early morning appointment), and a week later I get the same form letter: levels are within range, no change needed.

Did he not hear a word I said?

Turns out, he didn't. I called the clinic several times and when I didn't get a return phone call I drove down unannounced and had a confrontational face-to-face with him about it, both about the missed blood test and my oral report which he ignored. He finally agreed to make a small adjustment to my dosage, and within a week I felt improved energy.

After this experience I changed from an endocrinologist to a whole health doctor, who informed me that my endocrinologist never tested my T3 hormone level, a key indicator in treating Hashimoto's. I had read in Izabella Wentz's book that this was a common oversight—most endocrinologist's only test the T4 hormone.

My new physician and I also got a chance to review my endocrinologist's notes from the last two visits. In both reports, he wrote "Patient reports feeling well." He noted the weight gain, but not a single word about how I was actually feeling.

I realized that my very automatic greeting of  "well" after hearing the words "How are you?" is what he wrote in his report, and he hadn't listened to a single word I said.

So...word to the wise: if you are talking to your doctor, make sure s/he is clear if what you are saying is a GREETING or a REPORT. There is a real difference.

How am I doing now?

Great. My new doctor, Dr. Richard Sinda, is fantastic. I feel listened to. I am feeling better. He and I review my results together, because he knows I'm a data geek and like data, even though half of it goes over my head. He adjusted my hormone replacement dosage and started a new one because, now that we're testing my T3 level, we learned that it was also low and needed support. I also started a bunch of other supplements and vitamins to improve my overall health. As he says, "I don't want to know how much Vitamin C a human needs to prevent scurvy, I want to know how much Vitamin C a person needs to be in optimal health. There is a different between a lack of sickness and optimal health."

As for the weight, well, I now have the daunting task of losing it. I know what I need to do, I just need to do it. Move more, eat less (and better food choices). Hopefully it will come off as quickly as it went on, I'm giving me two years because that's the healthy way to do it.

So that's the latest. For anyone who is diagnosed with Hashimoto's, I highly recommend Izabella Wentz's book. I did not follow the protocols she recommends, though I am sure that if I did the weight would just fall off. Her dietary changes and supplements were a bit daunting and seemed overwhelming to implement, which is why I sought a whole health doctor who helped me implement the ones that made sense for me.

One more lesson learned that the person who can best advocate for your health is YOU. My health languished for two years; it could have been longer had I continued with my same doctor and hadn't advocated for myself. I'm glad I finally made the change needed for my own health.

Posted by JennyF at 8:15 PM No comments: