Skating in the Rain

Skating marathons are few and far between, so when they happen I prefer that we have good weather. 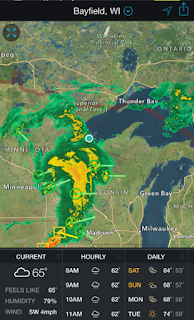 The Apostle Island Inline Marathon was this past weekend, and we had quite the girls' weekend planned. My skating friends Mary and Megan and my sister Kristi were all carpooling together to Ashland, Wisconsin, and the three of us were going to skate it while Kristi spectated.

The forecast called for 100% chance of rain by the start of the marathon, and didn't waver from that every time I checked it during the week.

Sure enough, as we stepped off the ferry onto the island, the first few drops began. And then it started coming down steadily. At one point it was a complete downpour and I watched the rain pool on the road into long, shallow puddles. The pros were gliding up and down the practice course getting used to the pavement, and I thought they were crazy.

I have never skated in wet conditions. The few times I've encountered a puddle on my path my skate has always taken a heart-stopping slip. Mary and Megan convinced me to at least start. After all, the course was three loops, I could always peel off after 8.7 miles and call it a day.

My friend Mary had trained hard for this -- she was hoping for a new PR, beating her old time of 1:38. But with the conditions being what they were, she had to re-adjust her goal. We decided to have a collective goal: 1) Stay safe 2) Stay together 3) Have fun. And so we took off with the rest of the pro/advanced women.

By the end of the second mile my feet were swimming in lakes in my skates; I think each skate weighed 3 or 4 pounds more from the water collected in them. I grumbled, I considered, I thought about peeling off after a single loop.

And then I thought about how amazing it would be to skate a marathon in the pouring rain. How many people can say they've done that? How many people would think that was the absolutely craziest thing they've ever heard?

Once I committed to skating the whole thing, my outlook changed, my energy changed, and I was all in.

It went from being disappointing to being exhilarating.

We accomplished our goals: We stayed safe. We stayed together. We all had a blast.

The rain let up about half an hour after we were done. We had to stick around for the award ceremony as I had taken 2nd in my division, though I really share that with Megan, who was 7/10th of a second behind me. Mary pointed out that if we had registered in the open/recreational skate all of us would have placed.

In three years of doing this marathon I still have never seen the sun from Madeline Island, but I can guarantee you we'll be back next year.

Posted by JennyF at 6:00 PM No comments:

On June 5th Wayne's dad's heart decided it had reached its quota of beats for a lifetime. Despite his pacemaker, his heart was beating at 31 beats per minute as paramedics loaded him into the ambulance. Upon reaching the hospital his body refused to carry on despite their efforts. His wife Millie, daughter Sherrie and her husband Todd were there to say good-bye. Millie told him to save a place for her next to him, in heaven.

He was 10 days short of his 85th birthday. Instead of gathering to celebrate another year, family members made plans to gather for his funeral.

While Neil had been slowly declining due to Parkinson's disease over the past five years, his departure at this time was unexpected, yet a blessing. He was spared the further loss of his mobility, his ability to dress himself, feed himself, and other such things that able-bodied people take for granted. He is no longer in pain, unable to sleep and be comfortable.

Over the past few years, if I called their home and asked how he was, his response was often something along the lines of, "Well, I'm not sure I would call this living."

The family gathered and came together in a way that honored him. They worked through the details of the funeral, they helped Millie deal with health insurance, social security, utilities and other arrangements. Together they are focused on Millie's comfort, ensuring that her needs are met and that she is able to live the way she wishes for as long as she is able.

And despite the fact that anyone could say, "He lived a long life," people have understood that losing a parent -- no matter how long that person lived -- is still a very real loss and a grief unlike any other.

Wayne's sister, Laurie, had already booked a flight to Minnesota for Neil's birthday celebration, which was to take place the following weekend. A friend paid for the change fee to move the flight, got her into first class and arranged for a limo to pick her up at her apartment and take her to the airport at 4:30 a.m.

Another family member has no bereavement leave and co-workers chipped in to help cover the time away from work.

A co-worker of Wayne's attended the visitation, driving three and a half hours from the Twin Cities to Tracy just to visit for 20 minutes, turn around and drive back again.

And today, on Father's Day, friends of ours, one of Lindsey's close friends and her family, dropped off a plant arrangement and chocolates because they know that the first Father's Day without is the hardest.

Sometimes it is through loss that we truly know our blessings.

Posted by JennyF at 8:59 PM No comments:

The last time Marissa signed up for Girls on the Run, it didn't go so well. It was disappointing. Frustrating. Anything but what GOTR is supposed to be about. You can read about it in my blog post from the day of the 5k, aptly titled "Giving Up."

I swore I would not make her sign up again for Girls on the Run -- I couldn't imagine anything worse than having a repeat of her last season. And yet, she wanted to register. I was doubtful but she insisted, so we did.

I was concerned that she wouldn't want to run the practice 5k because it was raining. Not drizzling, raining. But she was there with a big smile on her face, and off we went. We made a game of it -- we had to jump in every puddle we saw. We weaved back and forth across the trail to hit the puddles. If we were walking and saw a puddle ahead, we had to run to it and jump in.


She ran most of the way because of our game, unlike the other times when she only wanted to walk the entire distance. Our pants were soaked from the knees down, shoes sloshing and wet strands of hair sticking to our heads. We stopped at Caribou afterwards for a celebratory cup of hot chocolate.

What a blast. The next morning she said to me at the breakfast table, "I'm pretty proud of myself for running the 5k yesterday." She even wrote herself a note on our chalkboard in the kitchen. 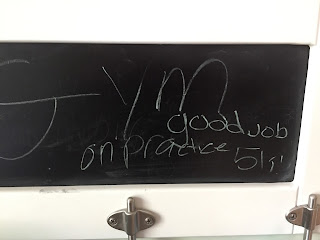 The day of the actual 5k, she was bummed that it wasn't raining that morning, but decided that sunshine and a brisk breeze would do. We arrived at the event on time (actually ahead of time, since we drove with Coach Kristi), and had plenty of time to greet each girl as they arrived.
The course was at the University of Minnesota campus. It looped around the campus in many different ways, but wasn't confusing because of all the signage and the volunteers directing runners. They had coaches and volunteers all along the course. We walked in a few areas, but once we saw a volunteer cheering Marissa wanted to run again. She didn't want to be seen walking any part of the race!
We finished in 39 minutes. More importantly, Marissa accomplished what she set out to do, and was immensely proud of herself.

That's what I was hoping for. Hooray!

Posted by JennyF at 9:00 AM No comments:

Email ThisBlogThis!Share to TwitterShare to FacebookShare to Pinterest
Labels: Growing Up, Marissa, Running

A Life In Elevens

While many people count milestones in decades, I like to count my life in 11's when I hit the double digits, meaning 22, 33, 44.

In May Wayne celebrated his 55th birthday, I my 44th. This makes the number 11 all the more interesting. I like to think about what was going on 11 years ago when he turned the age I am now turning. And the fact that our birthdays are only 13 days apart (plus 11 years) makes the math all the more fun.

When I was 11 I was in the 6th grade, starting my first year of education in Sheboygan Falls, the town I would eventually call my hometown, even though I spent my first 11 years elsewhere.

At age 22 I met the man who would become my husband. He was 33, the older brother of a college classmate of mine (now my sister-in-law). He lived in Burnsville and I lived in St. Cloud. He put tons of miles on his Ford Explorer and I on my Chevy Nova going back and forth between our two cities until I graduated from college and moved to the Twin Cities.
By age 33 this husband and I had our first baby -- one year old, born just three days before his 44th birthday. I think back on those early years of parenthood and I smile and cringe at the same time. I have absolutely no desire to go back to those days of sleep deprivation, dirty diapers and interpretive communication with toddlers. Don't get me wrong, they were sweet, cute and funny, but I am happy to not spend my every waking moment caring for wee ones any longer.
This year, our growing girls will turn 10 and 12. They are at that magical stage -- not yet moody,  snappy teenagers, but no longer in need of constant care and attention. They have their own thoughts and desires, their own sets of friends and interests, and are well on their way to becoming independent adults.

What a trip, this life in elevens.

Posted by JennyF at 8:33 AM No comments: