Overheard at the Inline Marathon 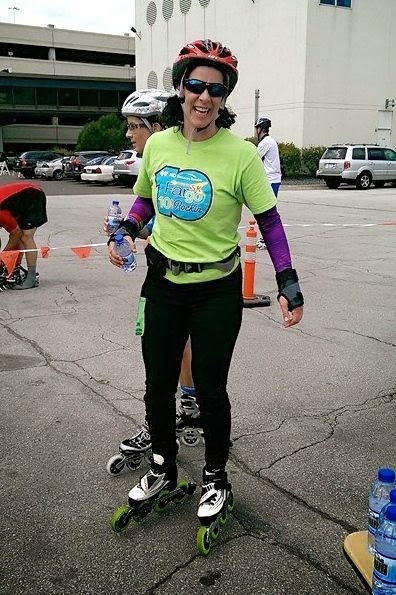 This past weekend I skated the North Shore Inline Marathon, my fourth or fifth year (I've lost count). And unless you know the sport of inline skating, there are lots of things you can overhear at a marathon that you might take the wrong way. Things like...

"You're so big, I could draft behind you forever."

"Did you squib the whole race? Oh man, that's embarrassing."

"If you can't keep up the pace you should fall back."

I heard all (except the squibbing comment) just today.

Drafting in inline skating is just like drafting in biking: someone takes the lead and others fall behind, benefiting from the leader taking on the wind resistance. The person in the lead is called the "puller." If a person drafts the entire race and is never the puller, s/he is called a "squib." It's not cool to be a squib.

I am always faster in races than I am skating alone because of drafting. And, if you are built like me, I benefit from drafting behind tall, broad-shouldered skaters, usually guys. Even if I take the lead, they never get the benefit of drafting the way I do, because I can tuck behind them and be invisible to the wind. They never get that break when they draft off my 5'6" frame.

I ended up skating the majority of this race with a guy named Chris from Superior, WI. He is tall and broad-shouldered, and we both were skating about the same pace. We tried to get in with other drafting lines, and a couple of times other people drafted off of us, but for most of the race, until mile 24, we were together, taking turns being the puller.

Which was when I made the first comment I wrote. Yep, I actually said that to a man I do not know. And neither of us laughed, we totally took it in context.

We skated together from probably mile 4 or 5 all the way to mile 24, where the pavement gets really sketchy and drafting lines break apart for safety reasons. Last year I saw three people bite it because they were drafting on this part of the course and the girl in front went down, taking the two who were right behind on with her. Not a pretty sight.

Even though I skated with Chris the majority of the race I couldn't find him at the finish line, because I didn't know what his face looked like -- I never once saw the front of him. He was wearing a North Shore marathon shirt from several years before which many skaters were wearing, and I had no idea how tall he was when he wasn't tucked over or on skates.  If he'd put his helmet on turned away from me, I probably would have recognized his neck hairline.

Last year a friend of mine saw a t-shirt at the race which read (on the back) "Do my muscles make my butt look big?" Which is totally funny to us skaters, who spend the majority of races looking at other people's backs and asses. 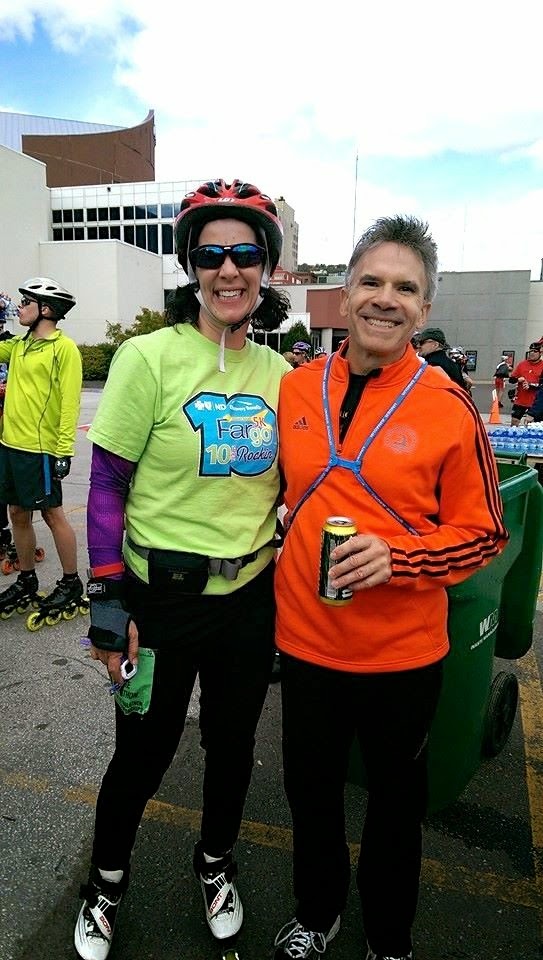 My fastest mile was the first one of the race, which is all downhill. Before I knew it I had passed the one-mile marker. Turns out I skated that mile in 3 minutes and 18 seconds. My top speed of the race was going down a hill near the end of the race when I reached 25 mph. Such a rush. I'm going to have to do this one again. 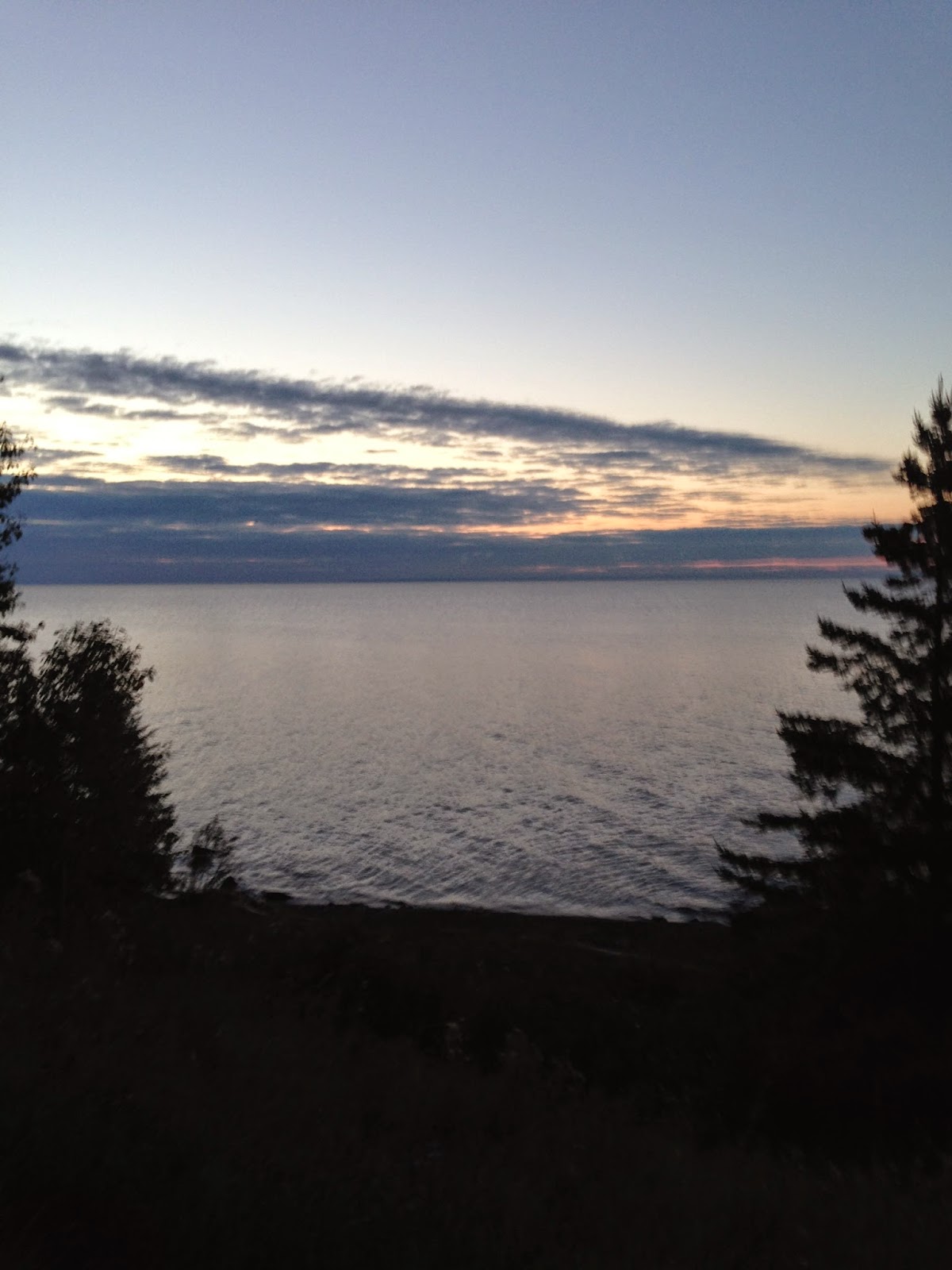 This year Wayne decided to run the half marathon that starts at 7 a.m. He beat his goal time and had a great race. He loved it so much that our friend Junal, who lives in Duluth, has already decided to join him in the half next year. Because seriously, who wouldn't get up at 4:30 a.m. when this is what you get to see and you get to run or skate alongside of this for 13.1 miles?
Posted by JennyF at 8:05 AM 1 comment:

I'm a little over a month into my new job now, and eventually I will look forward to my work-from-home days.

But for now, most days I'm commuting to our corporate office in Oakdale, a city east of St. Paul, for training. As much as I'm not loving the drive, it's easier to be there while training. Plus I get to know my new co-workers this way, see pictures of their kids and pets, put faces to names and email addresses.

Do not be deceived by the "35 minutes" estimate. That does not take into account the traffic into and out of two downtowns. While the drive is only actually 25 miles, it takes me an hour to get there in the morning, and more than an hour in the evening to get back.

On the way, I get to see this.

Which amuses me to no end. I'm used to seeing this sign only when we're actually leaving the state of Minnesota and going to Wisconsin to visit relatives. So to see this on my morning commute makes me laugh.

The days I'm driving in the girls take the bus home and Lindsey has the key to get into the house. I'm happy they are old enough to let themselves in and be home alone for a little while until I get home.

The drive through two downtowns is pretty cool. But I have to say, I look forward to the day when I don't have to do it.
Posted by JennyF at 9:56 AM No comments: