My dad and I have lived in separate states for most of our lives, since I was 14, actually. He and my mom divorced and he moved to Arkansas, where he would eventually meet and marry Terry, my stepmother.

You can imagine what a unique father-daughter relationship this made for. Our relationship was mostly phone conversations, with visits sprinkled few and far between.

When I was in college, he would call to see how life was, tell me to hang in there and keep studying. He himself was struggling with a business that was not doing well, one that eventually went bankrupt.

One Friday my sophomore year he called to let me know he and his girlfriend Terry had gotten married that day. I was reeling from having just learned that my boyfriend had advanced cancer; I could barely take in the news. Dad understood, and let my need to lean on him during this time overshadow his exciting news of his marriage.

When my boyfriend passed away 9 months later, Dad was the first call the morning after his death, at about 6 a.m. He was an insomniac and he knew I would be up, having never really slept that night.

"I'm sorry," is all he had to say, and the sincerity and depth of those two words made me break out in fresh tears. He didn't make it to the funeral; he didn't need to be there. I had other family and friends around to support me, and I knew he would be on the phone when I needed him.

Years later, I called him to let him know I was engaged to a man he had met only once before. Our wedding day was only the third time my dad had met his son-in-law, the second being the night before, at the rehearsal.

My husband and I traveled to Arkansas, to my dad and stepmom's rustic log cabin in the woods, what seems like now a scant number of times. Money was tight for them and for us, and travel wasn't easy to their rural area of the country. Dad started making driving tours of the Midwest, coming up to Minnesota to visit, then heading through Wisconsin to Upper Michigan, hitting Indiana on the way back to visit my sister Kristi before returning to Arkansas. He made many of these trips alone, as travel disrupted Terry's schedule so much as to be detrimental to her health. But then, we would return to our phone calls, with plans to visit again in a couple of years.

He visited when our first-born daughter, his first granddaughter from either of his two children, was six weeks old. He marveled at our new neighborhood, at how much we could walk to, and looked at the baby every once in a while. When he returned home and developed the photos from his visit, he found he had a camera full of architecture and flowers and only one of his granddaughter, which I had insisted on taking. This would become a running joke for years, with my taking pictures of houses and asking if he felt like visiting. 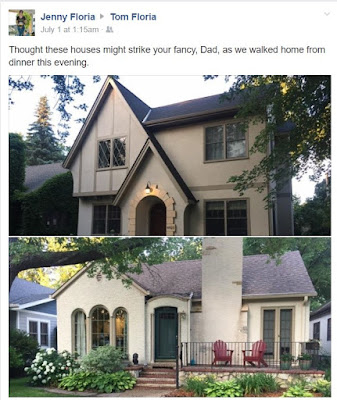 "I don't think we'd see each other any more often even if we lived next door," Dad speculated during one particularly lengthy, in-depth discussion. "Your lives are so busy, and we both are so accustomed to just talking to each other, I don't think we'd know what to do if we saw each other more." He was probably right.

We got into detailed discussions of the latest book we were reading, and we often gifted books to each other for Christmas. One year Dad bought me Travels with Charley, an autobiographical account of John Steinbeck's travels across the U.S. with his dog, Charley, during civil unrest in our country. I was so fascinated that I picked up all of John Steinbeck's works and read them one-by-one, even those I had to read previously for school. John Steinbeck is now one of my favorite authors, alongside Mark Twain, whose autobiography Mark Twain Volume One was also a gift from Dad.

The Color of Distance by Amy Thomson is another book that stands out to me that Dad recommended. I was so amazed by it that the minute I finished it I read it again with fresh eyes. Years later it still sticks out in my mind as an amazing find I would've never picked up had it not been for my dad.

For many years, my dad was my career counselor. I could call him with an issue or problem at work, and he would ask questions and listen. He would not give advice, he'd just get more details of the entire situation, often making me think more deeply about the situation myself. Then he'd think on it. And think.

The next day or the next week, depending on the complexity of the problem, I'd get a call back and he'd start with, "Say, I was thinking about your situation last night, and I have some ideas." By "last night" he meant some time between 3 and 5 a.m. He was a notorious insomniac whose best thinking was often done at night.

He would then come up with some brilliant perspective about the problem that I hadn't considered, or some wording or dialog that would help flip it on its head to those I was dealing with.

For many years he has not been able to be my counselor, he was so involved with his own health and illness, as he needed to be. In the past several years I would leave work and want to call him to ask his advice, but I couldn't ask that of a man who was struggling with his devastating health issues.

As his cancer treatments advanced he lacked the concentration to read, so we could no longer discuss the latest book we were reading. The only topic of our conversations for the past several years was how he was feeling, his treatments, the next course of action and hope for positive results.

Phone call by phone call, I lost my dad.

My stepmother Terry feels his physical loss every day. Every day, she wakes up and he's not there. She goes to bed alone. She has to do things around the house that my dad used to do. Hers is a profound, life-changing, daily reminder of his absence.

For me, I am left with memories of good conversations, of his voice on the phone, of laughter shared. And yet, in the cool early mornings, when I used to call him before I could call anybody else, I miss him. The minute I get in my car to drive home from work I miss him, as that's when I often called to download my day to his ever-listening ear.

Every once in a while I'll call the house and it's almost a treat when Terry doesn't answer, so I can hear my dad's booming voice on their outgoing voice mail. I hope she never changes it. 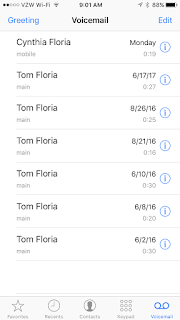 Posted by JennyF at 7:00 AM No comments: As my dad requested, his memorial service was around the 4th of July in Munising, Michigan. He always loved the 4th, and dearly loved his hometown. He could think of nothing that would be more enjoyable than to have family gather on that holiday to celebrate his life and then enjoy his hometown's holiday offerings. He specifically requested the Corktown bar, as his aunt and uncle had owned it once in the long-distant past.

Kristi and I scanned photos, planned the service, and otherwise worked to get everyone together.

Family came together from Arizona, Illinois, Arkansas, Florida and many others places. Classmates came in from downstate ("Lower Michigan" to the non-Yoopers) and Munising itself to pay tribute. His childhood friend, Joe Hase and his wife Barb came to the service as well, which tickled Kristi and I pink, as Joe's name is mentioned frequently in dad's writing as someone who got into a whole lot of trouble with Dad over the years.

As he would have wished, there was more laughter than tears. More stories than sadness. His tales live on in his blog and the hearts and memories of those he told them to.

The most wonderful part is that all the family came together to honor him. Even the younger generation nieces and nephews, who did not know him the way we did, knew there was something special about him and his ways. He was always genuinely interested in people, easy to talk to because he made you do the talking with his questions of curiosity.

Because of him, this group of people came together, people whose connections to each other may not have otherwise survived the trials of time and distance. New connections were made, to be preserved in more stories, more gatherings and fun.

Posted by JennyF at 8:23 AM No comments: