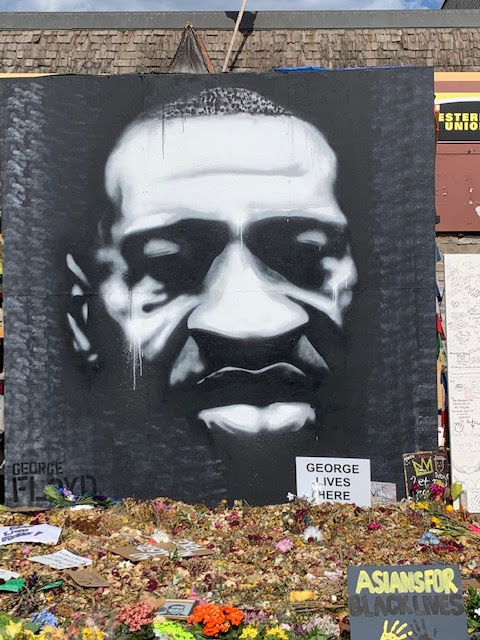 I've now been down to 38th & Chicago many times now since May 25th, the last day of George Floyd's life.

It feels important to do. I don't know how to feel every time I go, which is why I go often.

The community has blocked off the intersection by a block in every direction — no police in sight, citizens can manage this themselves, thank you very much. Depending on which direction you enter it from, your car could be stopped by pieces of art, by concrete blocks, or by cars parked sideways across the intersection, music blasting from the stereo.

At each entrance you'll find volunteers at a tent, handing out masks and spraying hand sanitizer on each visitor. We are in the midst of a pandemic, after all.

Today, I visited with my husband and both girls and we first visited the "#SayTheirNames Cemetery," an art installation a block away, in a green space that was previously empty. This art was created by two Penn State students and is made of tombstones of every Black person who lost their lives at the hands of the police. It is devastatingly large and not complete. While there I emailed one of the artists (per their sign) and gave a couple of names to add to it, the most recent killing happening just this past Friday.

From there, we walked the half-block to 38th & Chicago. You don't need the signs at each entrance reminding you that you're entering a sacred place, and to be respectful of brown and black people who may be in mourning. You don't need that reminder, you can feel it.

The street is covered with the names of Blacks who lost their lives at the hands of the police and have not received justice. The names stretch across faded yellow dotted lines that used to direct cars along the streets which are now only traveled by foot. An oblivious person was walking over the names and someone else asked him to move off of them and walk alongside. It was the respectful thing to do. 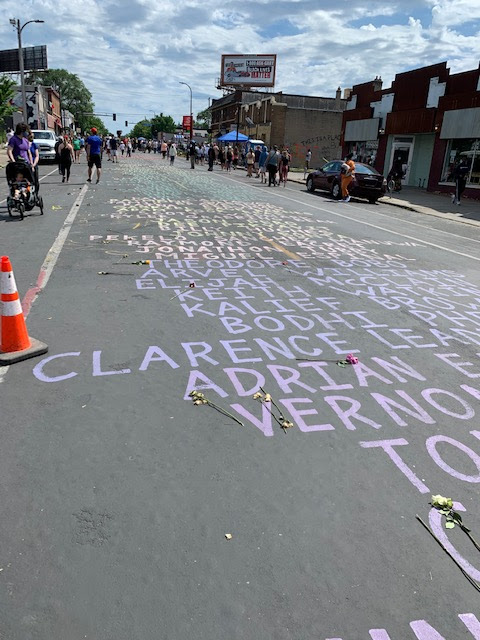 We came to the corner where George lost his life. The place on the street where he died has been painted, his body filled in with blue paint, wings unfolding from his shoulders as he ascends to heaven. The area where he died is marked off by red velvet rope and entirely lined with flowers upon flowers upon flowers, signs and letters to George strewn among the decaying flora. 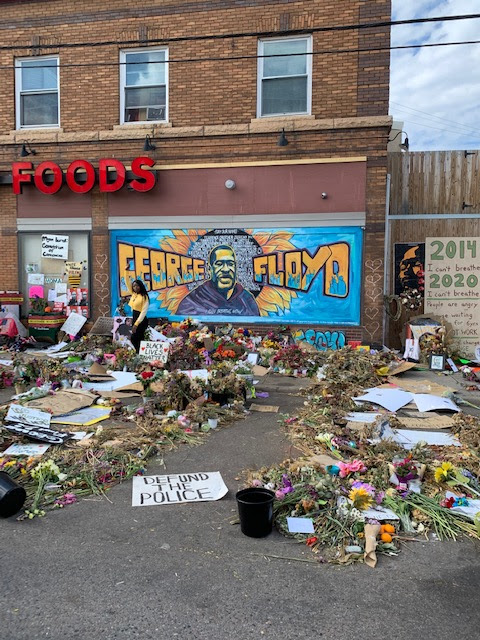 Around the corner is the beautiful blue mural that was painted just a couple of days after his death. Marissa and I were visiting while the artists were painting it. I have visited here when the flowers were so thick on the sidewalk that visitors had to take to the street. Now, the decaying and dead flowers from three weeks ago have been removed and a new layer of fresh flowers lain down by visitors, though everyone respectfully keeps their distance and gazes upon it from afar.

Tents are set up throughout by various groups. I purchased t-shirts from black business owners who are raising money to re-build their barber shop and the salon next door which were both damaged in the ensuing riots. There was a tent set up in the parking lot of the Speedway to register people to vote, one of few ways that people in these neighborhoods can take back their power.

The previous day I was in this same area, working the "Recall Freeman" tent to collect signatures to recall Hennepin County DA Mike Freeman, who was waiting for "more evidence" before charging the officers with George Floyd's death. The only evidence he could have been waiting for was that exonerating the police officers, as the public had already seen the overwhelming evidence of their guilt.

The center of the intersection has a large sculpture of a black fist raised up to the sky, surrounded by flowers and art. Art upon art upon art upon art. The street was filled with the original graffiti after his death, of people writing "murder," and "f12," and "say his name" directly on the pavement. And then this was supplanted by statues, murals, other art that overtook the graffiti. 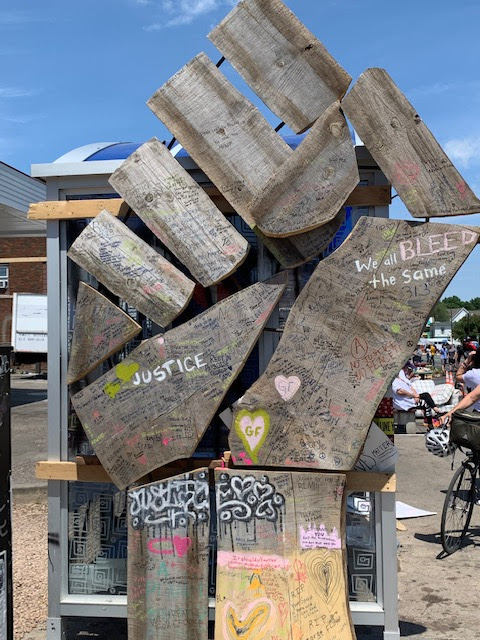 Black grief is not quiet. It is loud. It is sometimes profane. It is undeniable. It is contagious.

Each time I visit, I see something new. I talk to people and nod and pay respect to people who, outside of this sacred space, I may not have felt comfortable approaching. I've had conversations with people all of creeds and colors in this space and we are all there together, with a singular mission: to honor George Floyd's life, and to ensure that his death was not in vain, that his will be the one that will change our society forever.

I have no idea what the national coverage is of the happenings in Minneapolis. Probably, most local news stations turned to what is happening in their own backyards, since the rioting caused by the murder of George Floyd has spread across the country and around the world.

All I know is what it's been like here for the past two weeks.

I can tell you that a little over a week ago I was anxiously awaiting nightfall, wondering what parts of the city would be hit next. The businesses at 50th & France boarded up that weekend in anticipation of rioting. I later found out this was because the DA, Mike Freeman, lives in the neighborhood and some group had planned a march from 50th & France to his house to protest his bringing paltry charges against the police officers responsible for George Floyd's death. The case was eventually handed over to Minnesota Attorney General Keith Ellison (a black man), who then upgraded the charges against Derek Chauvin and charged the other three officers as well in their complicity.
I got somewhere between 4 and 5 hours of sleep a night for a few nights in a row, sleeping with one ear alert for people or vehicles who shouldn't be out after curfew. I was awarded with a spectacle of watching a family of raccoons raid my neighbor's garbage cans around 2 a.m., and a lot of groggy days. And then I thought about the black people living in our city whose nights' sleeps are like that every night, 365 days a year, because of the continual unrest within their neighborhoods and I stopped feeling sorry for myself.

The majority of property damage done during the protests/riots were not done by local groups but by outsiders who came to our city, attracted by the potential for violence. In our neighborhood and surrounding neighborhoods, community members were been finding gas cans and other incendiary materials to start fires. Our assumption was that groups were leaving those in places during the day, then coming back to them in the cover of night to use them to start fires. 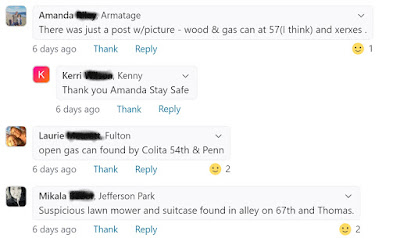 The local news ran a story asking for eyewitnesses or evidence to track down people who the ATF has footage of starting fires. Notice anything about the people they were seeking footage on? 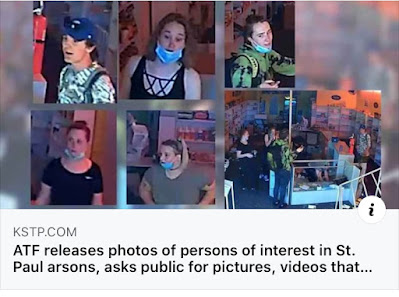 That's right, they are all white.
I see a lot of head shaking and mutterings of, "Why would they burn down their own neighborhoods?" The answer is, They didn't do it alone. White supremacists, anarchists and other groups came into our city and took advantage of the chaos to do those things. Whether their motivation was to discredit the Black Lives Matter movement or just watch a city a burn, they left town. They may have left in part due to the presence of the National Guard, but I can tell you that they also were thwarted at every turn by neighborhood watch groups who approached people and cars on the streets and told them to leave.

Our grocery stores have been incredibly busy because the grocery stores in nearby neighborhoods have been damaged or looted, so more people are visiting ours. The shelves for staples like canned soup, toilet paper, laundry soap and others are as empty as they were at the start of the pandemic. Many of those are being purchased by people who are then donating them to organizations in the area helping families whose local grocery stores have been burned down.
Same for our local Walgreens, the one where Beauty is a staff favorite. The other day Lindsey and I waited in a line that stretched to the back of the store to pick up a prescription. I've never seen a line that long there. An employee there told me that the four closest Walgreens to us were closed, either in anticipation of being attacked and damaged, or because they already had been.
Yesterday I attended an event called "The Path Forward," sponsored by Black Visions Collective and Reclaim the Block, in which 9 of the 13 Minneapolis City Council members vowed to defund the police. They had the crowd of nearly 1,000 people break into small groups to discuss what that might look like, then provided an email address to send those ideas collectively to them for discussion.

More on what "defunding" means and how that may look later. But...the overall feeling was hopeful, positive. We are moving beyond anger to action, and I'm excited to be a part of the change.
Posted by JennyF at 4:57 PM No comments: