Marissa versus the Popcorn

On Marissa's birthday, we went to the Scott County Fair in Jordan, MN. It was a pretty impressive fair, nicely kept up and clean. And unfortunately for them but good for us, somewhat poorly attended the day we went, as it was threatening rain. But we went anyway and the kids had a lot of fun. 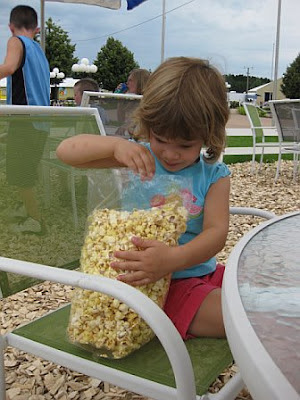 Here's a photo of Marissa's biggest challenge of the day: a very large bag of kettle corn. It's longer than her torso. That's all she wanted to eat all day. All offers of other food, cheese curds, hot dogs, etc, were met with an emphatic "no." By the time we left nearly half the popcorn was gone, thanks to Marissa.

She was past her naptime on the way home and cried most of the way home because we finally let Lindsey take the popcorn bag from Marissa. She got herself into such a state that when we got home she threw up while we were trying to get her down for her nap. Nothing like kettle corn throw up. It smelled like an old theatre.

She did finally settle down after that, got a nap in, and was in a better mood after.
Posted by JennyF at 10:30 PM No comments:

A couple of evenings ago our family took a little walk around our neighborhood. Our kids were fascinated by a couple of displays of large dog poop. You would think that this would be a common sight, but people are pretty conscientious around us about picking up after their dogs. Since we own a dog that weighs all of 16 lbs, our kids are used to the little piles that they need to watch for in our yard, not the big heaps we saw.

Twice they stopped to study for several minutes a couple of piles. Then later on in our walk we encountered a man walking a boxer breed. A boxer looks similar to a Boston terrier, which is what our dog is, but weighs about 50 lbs more. They have the same shortened nose and build, but a lot taller and more muscular. One of their other traits is their bobbed tail, which leaves their behind...well, exposed.

The man and dog walked by us and Lindsey watched it as it went on its way. And then she commented, "That dog had a big hole."

"A big hole in his butt. I betcha he could make those big poops we saw."

Enough said.
Posted by JennyF at 11:24 AM No comments:

Marissa had a good birthday, for just turning three! She had a party on Saturday with some of her friends from KinderCare. Then on Sunday, her actual birthday, she awoke to a load of gifts from her family to open, including one from her Grandpa and Meme Floria.

One of the gifts that I bought her was a pair of training roller skates. She's more adventerous than Lindsey in whole, and I thought that she would like to try roller skating. Much to my surprise it was the least favorite gift and Lindsey gravitated to them.

So near the end of the day as Marissa was getting ready for bed, I told Lindsey that she could try Marissa's skates on outside.

She was clad in knee pads, elbow pads and I held both her hands the entire way. She was slipping and sliding all over, but by the time we were getting finished up she was starting to actually skate one food at a time. I would stop each foot by putting mine in front of her, but she was getting the groove of it.

Then she stopped for a moment to pick her nose, which promptly began to bleed. I went in to get her a kleenex and by the time I came back out she had several drips of blood down her shirt. So we got the skates off and got her inside to clean her up.

Of course, she comes inside with a bloody nose and Wayne assumed she fell and bonked her nose.

But she's the only kid I know who can get a bloody nose from picking her nose while roller skating.
Posted by JennyF at 10:40 PM No comments:

In honor of Marissa's 3rd birthday today (Happy Birthday!), I thought I'd direct you to a newly discovered site that I am thoroughly enjoying: Cake Wrecks.

Click on the link above or newly added to My Favorite Places.

I thought of my friend Renee when I came across this site. She and her sister both took cake decorating classes this past year, with some good and bad results. These are some good ones!
Posted by JennyF at 6:28 AM No comments: 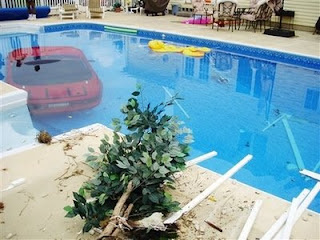 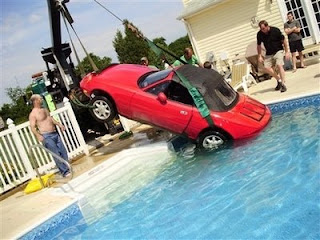 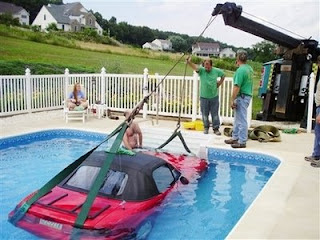 Posted by JennyF at 1:17 PM No comments:

I am nearly done reading "The Grapes of Wrath." What an incredible read. I highly recommend it to anyone looking for a new book.

I do NOT, however, recommend reading it during a downturn in the economy, or, as I like to think of it, a recession, which we what we are in right now. It isn't a very big leap from where we are today to where the characters in this book end up. At least, it doesn't seem that way in my imagination...
Posted by JennyF at 10:30 PM No comments:

Email ThisBlogThis!Share to TwitterShare to FacebookShare to Pinterest
Labels: Books

Anyone who knows my dad knows that he revels in and inspires to be a great storyteller. Which, for the most part, he is.

Here he is telling a little ditty about my Grandpa Tom, his former father-in-law. I'm glad I was able to capture my Grandma's reaction, too.

Email ThisBlogThis!Share to TwitterShare to FacebookShare to Pinterest
Labels: Family

This morning, while the girls were amused by Sunday morning cartoons, I went down to Lake Harriet for a little Rollerblading excursion.
I drove down there (yes, I drove; the hills are too steep for me to skate), and began preparing to go skating: doing some leg stretches, getting my water bottle out, putting on my skates and finally my iPod. But it seemed sacriligious to turn that iPod on, it was so beautiful out and the sounds so content. What a shame to drown them out with music that I can listen to at anytime.
If you are one to read my dad's blog(s) (see links to the left), you'll know that he enjoys his morning walks around his property and writes picturesque descriptions of his walk. I have different sights and sounds in the area that I live, but I thought I would share some of my impressions from this morning's skate.
I took in the sounds and sights of:

On my second loop around the lake, I finally began getting tired and turned on my iPod for inspiration. But what a grand inspiration the first loop was!

This morning on the radio I heard about a child sexual offender who was recently arrested in Michigan. He had been arrested at a home where he had thought he would be meeting a 14-year-old girl for sex.


He showed up for the meeting with the teenager wearing a shirt that said "World's Greatest Dad." 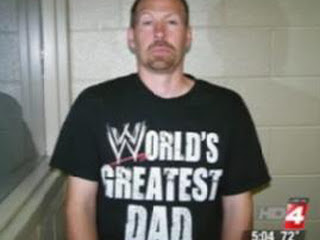 Email ThisBlogThis!Share to TwitterShare to FacebookShare to Pinterest
Labels: Causes/Rants 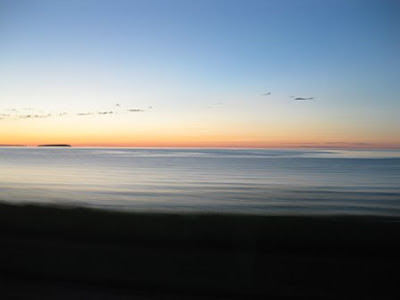 You can see by the above photo why I kept calling Lake Superior an ocean, right? It was so unbelievably gorgeous, and I couldn't believe how still a lake that large could be. Yet even just an average wind sent up long rollers to the shore, crashing so loudly you had to yell to talk over it. What an incredible lake.
This photo of the sunset was taken at 10:30 at night, driving back to our cabin after a day out at Dana Lake with family. Yes, 10:30 pm. It's amazing the difference being just a little further north and on the western edge of the Eastern time zone can make to the length of your day.
As mentioned previously, it was a wonderful vacation, despite a shaky start with a rough ride north. We ran into some severe thunderstorms with, you guessed it, hail. Marissa hid her head under her blankie at one point because of the noise, and we had to pull over to the side of the road. It rained the whole first day, but after that we had beautiful weather.
We rented a cabin right on Lake Superior -- we could follow a little stone path out the back and came out of the woods at the beach. It was our own private beach practically, with nothing but cabins in the area and no one out. 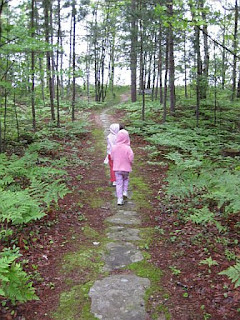 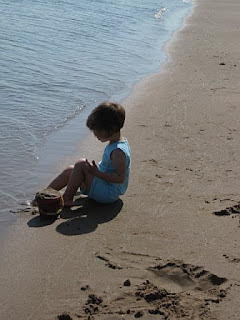 We spent lots of time in Munising seeing family, my Grandma Dolaskie, widowed now for two years, and my Aunt Carol and Uncle Chap, Uncle Tom and Aunt Anne, a multitude of dear and wonderful cousins and, of course, my dad, sister and brother-in-law. 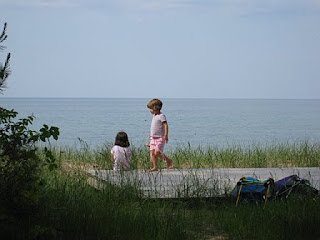 I'll share other little stories here and there as I think of them. Thanks to everyone for their hospitality and for helping us have such a fun Fourth of July!
Posted by JennyF at 9:55 PM 2 comments:

Email ThisBlogThis!Share to TwitterShare to FacebookShare to Pinterest
Labels: Travel

As noted previously, earlier in the year we attempted to go strawberry picking only to have the place be closed when we got there. So after our long vacation we decided to try once again since the season was exceptionally late this year and we normally would've already missed our window of opportunity.

I picked out a place in Hastings, MN, called the number and confirmed their hours and that they were indeed still picking strawberries. So mid-morning on Saturday, July 12th, we set out.

Actual strawberry picking time: 45 mins, including the 5 min. tractor ride to and from the field.

Years taken from life due to travel experience: 2
Posted by JennyF at 4:51 PM No comments:

Could we have had a better time??? I think not.

More later, but we spent a week in the Upper Peninsula (U.P. for you non-Michiganer's) spending time on Lake Superior, visiting family, and taking in a small town 4th of July parade.

Could we have had more fun?

Only if the kids had slept better at night. But it was a ball regardless.

More later, but here's a tidbit.