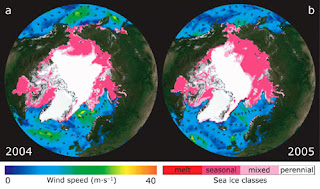 You may notice on my "favorite places" listing I've got the link to climatecrisis.net, the site affiliated with the movie "An Inconvenient Truth."

I was given the movie to watch by my boss, who asked that everyone who works on the World Wildlife Fund account with him take a look.

I was watching the movie one evening after the girls were in bed a couple of nights after Christmas, and if this isn't the biggest wake up call that we are creating our own end, and not within a 100 years, not within 50 years, within our own lifetimes, I don't know what is.

In the latter half of the movie I heard Lindsey stir and I went upstairs to see what was up. She had woken up and wanted to be rocked to fall back asleep. I sat rocking her and began crying, thinking about her future and how different the world was already for her. It was December 27th and we were listening to the pitter patter of rain on the roof. Rain in Minnesota in December, because it was too warm to snow, all of 38 degrees. When we did finally get snow (per previously post "Finally...Snow!") we got 3.5 inches, which dissipated in the next couple of days because we hit 40 again.

These are not the winters of our own youths, when snow fell in November and lasted through until March, streets lined with feet of snowbanks. Sleds sit unused for the most part in our garage, Northern Minnesota resorts that rely on winter snowmobilers to make it through the year are crying for business and closing up shop -- three years in a row. 2006 marks the third "brown" Christmas (i.e. less than 1 inch of snow on the ground) in Minnesota in the last 10 years. I can see the difference in my own short lifetime -- what does this mean in the larger scope of the earth's lifetime?

Yeah, you say, boo hoo for nostalgic winters, if that's the only change brought about by global warming, I'll keep my gas guzzler, it's worth it to not have to deal with ice and snow anymore. Right? Uh huh. Yes, it would suck to live on the coasts, considering that in 20 years they may be a mile under water. But what does it mean to me?

I thought about an article I read last winter about how the lack of snow cover allows the farmers' fallow fields to lose more and more topsoil every year to the strong plains winds. Some of the richest soil in the world is in the Midwest, and it is blowing away before our eyes every year. And every spring farmers are on edge, waiting for that first rainfall because we didn't get enough moisture over the winter to give the fields a good head start on the growing season. Yes, farmers are inherently nervous about the weather, it's the most important subject of conversation in their worlds. But the statistics are backing them up; there is reason to be concerned.

I thought about what the rising seas would mean to the rest of the continents not swallowed by water -- let's take a world population of 6.1 billion people and give them 1/3 less room to live. Wait, yes, we'll kill a bunch of them first, especially those poor people living on the Indian peninsula, on the coast of China, where one quarter of the world's population reside, so there won't be too much crowding for the rest of us, that'll solve that problem. Maybe I'll still have room to drive my gas guzzler.

I thought about the loss of the Galapagos Island and the thousands of species that call those islands their home.

I thought about the polar bears that are already drowning at the poles because they sometimes have to swim for 60 miles before reaching ice strong enough to stand on.

I thought about the nasty insects that live in warmer parts of the world that are now surviving our winters because they don't get killed off by cold. No wonder Dutch Elm disease is on the rise again in Minneapolis -- for the second summer in a row, over 1,000 elms were taken down by the city of Minneapolis due to Dutch Elm. City arborists said they hadn't seen an outbreak this bad since it first hit the Twin Cities in the 1970s.

Still want to buy that SUV? Is it still worth it to you? Now look at your child, your niece, your nephew, and ask yourself that again.

I urge anyone reading this to see the movie, to take action, to do your own part to conserve energy. Write to your legislators, your representatives, tell them the US must lead the way, not be dragged, towards our own rescue. We must sign the Kyoto agreement, improve our emission standards for vehicles, and help developing countries to not take the path we've already broken.

In the movie they make the point of the frog who, when placed in a pot of boiling water, will jump out. But when put into a pot of lukewarm water then the water temperature is gradually increased, the frog will sit there complacently while the temperature rises and rises...and is eventually rescued. (It's important to rescue the frog.)

Email ThisBlogThis!Share to TwitterShare to FacebookShare to Pinterest
Labels: Causes 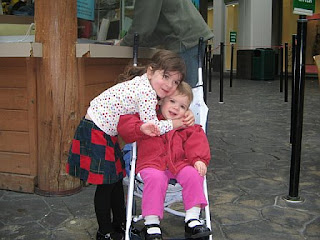 One morning last week Wayne and I were getting the girls ready to go to Children's World. Wayne was wrestling Marissa's coat onto her, trying to get her hat snapped on before she could rip it off of her head and so forth while Lindsey was sitting on the couch, waving her mittens in the air yelling, "Daddy put my mitties on! Daddy put my mitties on!"

I say, "Lindsey, I can help you with your mitties."

I pretend to sniffle and cry and say, "Lindsey, don't you like Mommy? Mommy likes you."

Lindsey looks me straight in the face and suggests, "You can like Marissa."

How did I rate this low on the totem pole? Even the dog gets more unsolicited affection some days.

Email ThisBlogThis!Share to TwitterShare to FacebookShare to Pinterest
Labels: Parenting 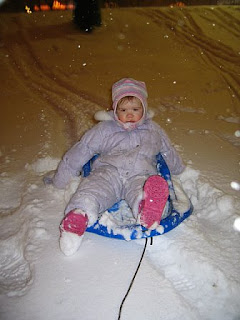 We've been waiting and waiting, and finally, on December 31st, we got snow. A good amount of it, enough to go sledding in.

We didn't wait for it to stop, we headed out as soon as both girls got up from their naps. Lindsey was so excited, she got herself completely dressed in her snowbibs and coat, just needed a zip and a hat and she was ready! Marissa, on the other hand, looked like Ralphie's little brother Randy in "A Christmas Story." We struggled to get her in the almost too-small snowsuit, and once she was in she wasn't able to move much. She even whined a little bit like Randy did. 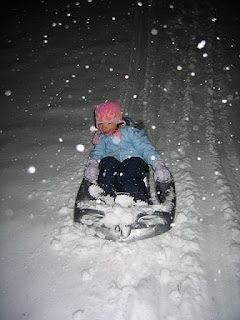 Since it was still snowing we could pull their sleds down the sidewalk. We went down to the park and went down the hills for a while. Then the next morning, before any of our neighbors were up it seemed, we got out there and did it again. Lindsey loved it, Marissa wasn't quite so sure.
Posted by JennyF at 2:59 PM No comments: