Hard to believe that that's a concern, isn't it?

Posted by JennyF at 8:16 AM No comments:

Lindsey has picked up a new "hobby," inspired by her Aunt Kristi.
When Kristi was visiting in January the girls had lots of fun checking out her online game, World of Warcraft. Kristi was sure to keep it clean, no killing, no blood with the girls around, though she did show how her character danced (ahem).
A week or so ago Lindsey and I were roaming the Disney site, looking for princess or fairy games. We came across http://www.pixiehollow.com/, a child's version of fantasy online gaming. So Lindsey and I created a fairy for her and figured out how the game works.
We've now got one logon with three fairies, one of which is mine and two of which are hers. She hasn't taken on any quests, but she's an expert sunflower and rose petal picker and has earned more badges than I for friendship, adventure and exploration.
I think we have a future WoW player...in about 15 years.
So here's a picture of how Marissa spends her Saturday morning...the same way I did as a kid, in front of the tv with a bowl of cereal (she's even using the same desk I had when I was a child). 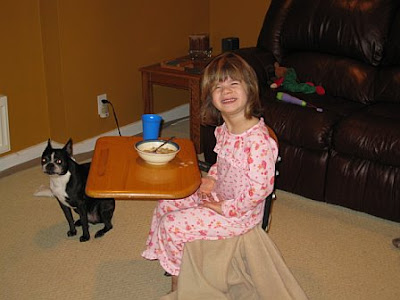 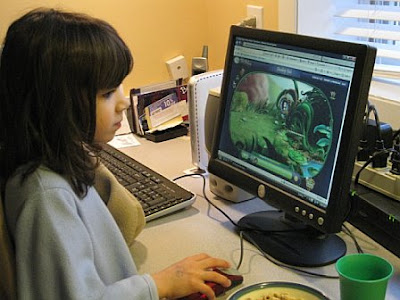 Never fear, screen time is screen time; she knows she has to give up cartoons to play computer games and we limit her time. If anything, it's more interactive than watching tv.
Posted by JennyF at 9:42 PM 1 comment:

Today our family went to an educational toy store, where Lindsey and Marissa could pick out a gift with some money they'd gotten as valentine's gifts. Marissa was looking at one toy which has to do with color identification. She pointed to each of the colors and named them correctly: I imagine you can guess what the colors are by the following: "Wed, boo, lellow, orange, purple, geen!"

Her pronuniciation is not the clearest, so I decided to help her with the last word she'd said. I said, "Marissa, can you say grrrrreen with an 'r'?" I asked, emphasizing the "r" in green.

And she didn't even know she was being a smart-ass.
Posted by JennyF at 4:23 PM 1 comment:

There is nothing more frustrating than getting up extra EXTRA early to catch a flight…only to have it get delayed so much that you could’ve gotten a full night’s sleep. That’s what happened to me and my traveling compadres this past week.

My alarm went off at 3:30 am this morning – that’s not morning, people, that’s the middle of the eff-ing night – to catch a 5:45 flight to Milwaukee with a connection to Washington DC.

Due to fog in Milwaukee our flight got delayed and delayed to the point that the airline we were supposed to take booked us a direct flight on a different airline to at least get us to our final destination sometime today, though we will be arriving 3 hours later than scheduled.

You can imagine the series of changes/announcements/communication that occurred throughout the day, and I won’t bore you with all the idiosyncrasies. But I have to share one particular part of the day that I found humorous.

When, for the second time, we de-planed to re-book a flight, the gate agent was attempting to service as many people as he could from the gate so that we didn’t have to exit the secure area to go to the ticketing area and re-enter security. The line was long and there was only one agent there working the computer. We decided to divide and conquer, so my co-worker went down to the ticket counter to see if he could get help faster; if so he would call us and we’d all traipse down to get re-booked.

While I’m waiting in the obnoxiously long line at the gate, I hear the gate agent get on the phone and practically beg a co-worker to come up to help him re-book all the passengers. He finally got a confirmation that help was on the way, at which point he says, “Oh thanks man, I really appreciate it. I owe you a cup of coffee or something.”

In the meantime, I get the call from my co-worker who is now at the ticket counter, getting help from an agent right now, so I leave the long line to go to the ticket counter to get re-booked right away. The person at this particular counter was in a foul mood (did he get up at 3:30 am too??) and being a bit of a jerk to work with. He stood with one arm bracing his whole body on the counter while tapping away with one finger at the keyboard. It took an interminably long time for him to get just our tickets re-booked.

So now I’ve heard both sides of the conversation – I can only imagine that the call was from the poor gate agent stuck at gate 8 with a long line of frustrated passengers, growing even more impatient. I look at the “long line” of people behind us that this guy has to still process.

There are two more people behind us.

Wow, that is quite a long line. Then again, since he’s pecking away at the keyboard with one finger, I can imagine that it will take him just as long to process these passengers as it would the agent at the gate to process the 10 he had waiting in line.
Posted by JennyF at 4:50 PM 1 comment:

Email ThisBlogThis!Share to TwitterShare to FacebookShare to Pinterest
Labels: Travel

Lindsey is taking dance classes now on Saturday mornings. She is loving them, but mostly because her good friend Emma is in them as well.
Here's a picture of her in the class: 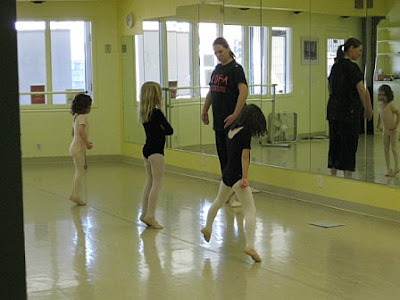 Note how the teacher is up on her toes, with arms in first position. The girls next to her are on their toes, arms also in first position. Lindsey? Well, Lindsey was in the process of falling off of her toes, thus the awkward stance.
She's the only girl I know who falls down just standing up.
But the cool thing is that when they are on their tippy toes she is actually right on the point of her toe, thus the reason why she falls down when she does it. And even better, she's having a great time.
Posted by JennyF at 5:12 PM No comments:

I was in Washington DC last week for the twice-annual nonprofit conference, my first time there since the election heated up and since Obama took office.

It was interesting being in the city at this time. Obama had been in office for about a week and a half when I arrived. The airport had huge banners saying "Welcome President Obama." I found that ironic, because I can guarantee you that Obama did not walk through Reagan National Airport on his way to the Oval Office; so I'm pretty sure these banners were not meant for him to see.

Later on, we had dinner with our client at a restaurant that was in a mall. The center of the mall was open for three floors with a large banner that went all the way from the top of the third floor to the 1st floor that had an image of Barak Obama walking with the message "Congratulations President Obama" on it.

I am pretty sure that signs like these did not welcome President Bush when he took office. Actually I should know, I'm usually in DC this time of year, I don't remember seeing this at all in January of 2001 or 2005. And while I'm a big fan of Barack Obama, I have to say this was a bit unsettling to me.

It immediately reminded me of some of the photos we've seen of leaders of other countries...leaders like Saddam Hussein, Ayatollah Khomeini, the Iranian president (I don't feel like googling his name right now) and others who led in a much less than democratic way. Granted, those outpourings of "love" came from fear from the constituency, but it made me wonder:

If Obama recommended as part of his economic recovery that all Americans turn over 100% of their earnings and belongings to the government for re-distribution to the general population, how many would follow unquestioningly? Even when he admitted he "screwed up" by endorsing Tom Daschle, it was a minor splash, no big deal. Can this man do no wrong? If that had been George W Bush the media would've jumped on him, chalking it up on a long list of mistakes and errors.

Some media actually ARE criticizing him and his proposed policies, which I'll be honest I find welcoming. He does not walk on water, people, he's just a man with a remarkable story and great charisma.
Posted by JennyF at 10:40 PM 1 comment:

I have to put a plug in here for a friend's sister, who will be publishing her first ever book shortly!

Rhonda is a truly amazing woman who has taken a difficult life experience with cancer and turned it into something positive. If we could all learn from her without having to experience what she did to get there, we would all be the better for it.
Posted by JennyF at 10:46 AM No comments:

Yesterday I got a chance to give a pregnant co-worker a good belly rub. It was fun feeling where the baby was, feeling movement, wondering what parts are where. She joked that people who hadn't been pregnant would touch her belly very gently, while those of us who had been through the experience would have a firmer touch.

I told her the story of when I was pregnancy with Lindsey and went in for my 24-week appointment. The doctor told me that the baby was sunny side up about then (meaning head up/butt down) and that she'd check at my next appointment to make sure the baby had turned. If she hadn't turned by 30 weeks she could possibly be too big to turn, and I would be looking at a possible breach baby and/or C-section, which I wanted to avoid.

For the next four weeks I nervously rubbed my belly, feeling a large hard area at the top, which I took to be the baby's head. I worried that the baby wasn't turning, as that hard spot wasn't going away.

Four weeks later, I go in for my 28-week appointment, and am told that all is good, the baby's head is definitely down. So I had to ask.

"So what's this part up here on the top that's so hard? I thought for sure the baby hadn't turned yet."

She feels my belly and laughs. "I'm pretty sure that the baby's sit bones on her bottom."

"Whew!" I said, "Well, hopefully it'll be the only time in my child's life that I mistake her ass for her head."

True story.
Posted by JennyF at 1:07 PM No comments:

With all the rides at the Mall of America, this one captured the girls' imagination the most. (Probably because Lindsey stuffy "Mousie" could ride, too.)