We hosted a Halloween party at our house this year, with each girl inviting up to 7 of her friends.

The girls didn't have school on Friday, the day of the party, since it was the quarter break, so Lindsey's friend Ava came over and helped decorate. They put together a pretty amazing haunted house in Lindsey's bedroom.
The party was a blast, and the haunted house a huge hit. Marissa and her friends would gingerly step into the room, then one of them would scream and the others would join in and they would all run out. Then they would laugh and say, "Let's do it again!" 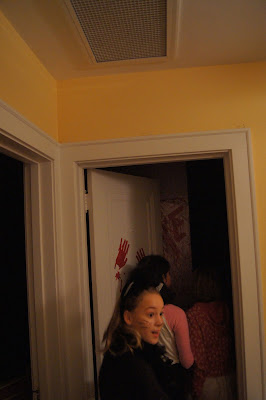 They played ghosts in the graveyard, despite the light rain, and nibbled on snacks.

The next night was Halloween. Lindsey planned a group costume with her best buds. They call themselves the Four Musketeers, so they decided to dress the part. 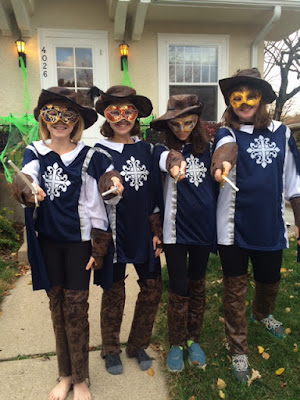 The four of them trick-or-treated a route that went between all their homes, ending at her friend Ellie's house, with stops for hot chocolate and cupcakes on the way. I didn't see them all night until Lindsey got home after her festivities.

Marissa dressed up as a police woman and I took her trick-or-treating with her friend Erika, the vampire. Erika's mom and I visited along the way while the girls hit house after house. 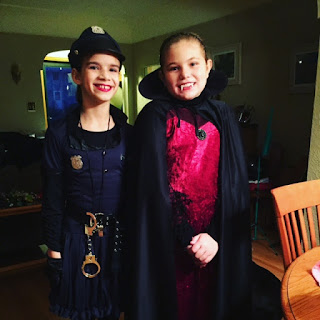 It was a beautiful evening with a bit of a chill in the air. The two girls took in quite a loot. The trading continued into the next morning.

They have to decide which ones to keep and which ones to turn in for money. They get $4 for each pound of candy they turn in, a pretty good deal for a kid.
Posted by JennyF at 9:40 AM No comments: