I learned this past weekend at my youngest's birthday party that she has a flair for the dramatic. And I don't mean in a theatrical, musical way, which we always knew about.

I mean in a Mary J. Blige kind of way. 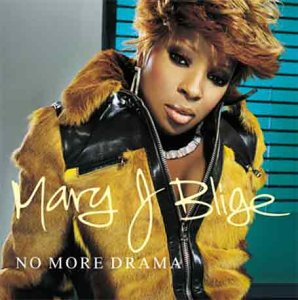 At some point during the party someone was in tears, with the exception of one little girl who absolutely refused to get involved. Good for her!

Don't get me wrong -- my daughter's friends are all wonderful girls and I like all of their parents. We see pretty eye-to-eye when it comes to parenting and understand that our kids are our kids and not us. If you ask Marissa if she had a good time at her party her answer is YES without hesitation. It just seemed like a whole lot of drama to finally figure out how to get along and have fun.

As I wrote earlier, the swing in the backyard was a big hit with all the guests. They would all run out and one would yell, "I'm first on the swing!" followed closely by "I'm second!" "I'm third!" and so on.

Learning how to take turns: Awesome.

Except not awesome when the girl who yelled "I'm third!" gets on the swing second.

Instead of saying "Hey I called second, wait your turn," the girl whose turn it was would burst into tears and curl up in a ball near the house. Some ignored her, others would wander over to ask her what was wrong, to which she would reply, "Nothing." 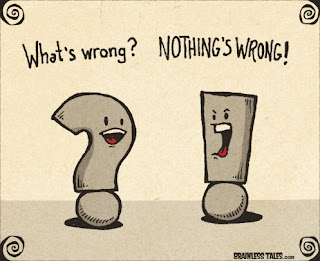 She wouldn't disclose what was wrong until a sufficient number of guests were coaxing her to tell them, at which point she would bawl even louder as she recounted the wrong. Of course, the girl who knew what was wrong took this opportunity to swing to her heart's desire. By the time everyone figured out what was wrong she was done and got off the swing anyway.

It these had been boys, someone would've been dragged off the swing, a fistfight would've occurred and pretty soon no one would remember the swing existed in the first place. It'd be over in two minutes and they'd all be friends again, off to the next adventure. Instead, the girls spent the evening going from re-assuring one crying girl to another, to finally BEING the crying girl, probably because of all the crying going on.

At one point my daughter was up in her bedroom crying her eyes out; I have no idea why and really didn't have the emotional fortitude to ask why or care about the answer. Drama. All I knew is that she was even more upset because her other friends were still outside playing on the swing and not upstairs in her room with her, being just as miserable as she was.

So it IS true; misery loves company.

None of this was really helped by the fact that I had no structured projects or activities for the party, outside of a candy necklace making project that my mom had given me the day before. I had asked Marissa months ago for help planning her party, what things she and her friends might like to do. I asked weeks ago, then days in advance. The day before. Finally, an hour before the party was supposed to start she starts to tell me what activities she'd like to do. I had no plans to make a last-minute run to Michael's Arts and Crafts then, especially when I still had a cake to pick up. As it was, one of the guests was dropped off an hour early, which ended that helpful planning conversation.

While all this was going on, Lindsey was at a playdate at a friend's house THANK GOD, because she would have had absolutely no tolerance for all the shenanigans. I can only imagine the intensity of the eye-rolling and depth of the sighs we would have heard had she been home to witness this.

I don't really have an answer for how to stop the drama, except to remind my daughter that she is responsible for her own actions and hers only -- she can't make someone else say or do something that she wants them to do. If she just focused on being a good friend to others, then they will be good friends in return.

Any other advice from parents of the dramatic set?


This is what an 8-year-old does when she plays with her friends.
This is the kind of cake an 8-year-old asks for when she can have any cake in the world. (Well, almost.)

We have two girls who remind us frequently what the other one got or didn't get at a certain age. Several months ago Lindsey got mad when she thought that Marissa was having a slumber party for her 7th birthday party. We had to remind her that her little sister was turning 8, the same age Lindsey was when she had her first slumber party. God forbid the little sister should get something before the big sister does...sheesh.

For many of Marissa's friends, this was their first ever sleepover. Some parents were as nervous as the kids at drop-off; would their kid get homesick? Would they be okay sleeping in someone else's house?  We've learned that kids adapt quickly, especially when plied with late-night movies and popcorn.

We had one incident in which one of our guests fell against Marissa's dresser hard enough to create a gash and bleed as head wounds tend to, which is to say profusely. While the bleeding stopped quickly, we still called her mom who came over for a little extra reassurance and TLC. Marissa's friend decided that she felt okay enough to stay, and enjoyed the rest of the evening after icing it and having some Tylenol.

Lest we forget, this summer birthday was unusually cold. It was only a high of 64 during the day, 54 degrees at night. Guests brought slippers and robes just in case, and ended up using them because there was such a chill in the air. Despite the unseasonably cool temperatures, the swing in the backyard was a huge hit with everyone, who loved being pushed or pushing others around in a big circle. 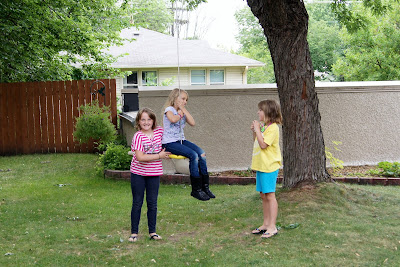 And...you know you have good friends when they arrive for kid pick-up the next day with two coffees for you and your husband...just because that's how sleepovers tend to go.

As for me, it's hard to grasp how quickly these years are going by. It seems like each milestone Lindsey passes Marissa passes the next day.

After the guests had gone home, Marissa pulled out the new Barbie dolls she had received and made pretend. She made up conversations, changed their clothes and danced around to music. It was unself-unconscious, sweet and childish. Just a reminder of what it means to be 8.
Posted by JennyF at 8:27 PM 1 comment:

A New Definition of "Pole Position"

Today I tried a pole dancing class for the first time. I only did it because my friend Jennifer's birthday is today and her idea of a good time was getting her friends together to try something that she's discovered is a great workout and a lot of fun.

I just have to say, it was really, really fun.


At the beginning of the class the instructor -- a beautiful, petite, lythe dark-haired woman in her 20's -- showed us the dance we would be learning. She looked amazing; so graceful. Sensual. Comfortable in her own skin. She did a spin around the pole where she floated above the earth, legs poised in such a way that she looked like she was hardly touching the pole. She showed us the move and had us try it.

She looked like she was floating. We looked like we were on a fireman's pole, spiraling downwards in a deathgrip.

We laughed at ourselves and tried again. We laughed even harder at the second attempt. And by the third, some of us got it. And the rest of us got it on the fourth.

We had such a great time.

After the class we celebrated with red velvet cupcakes and wished Jennifer a happy birthday. We took photos after the class in Jennifer's backyard.

It was more physically demanding than  it looks. My shoulders hurt, my neck hurts. I don't even want to know what's going to hurt tomorrow morning.

I can now check pole dancing off of my bucket list. Not that it was on in the first place, but now it doesn't have to be. It was so fun I might have to go back and do a couple more classes with Jennifer.
Posted by JennyF at 7:24 PM No comments: