I've become a fan of the British Baking Show, which I learned about from my sister-in-law Laurie and have been watching on and off for a few years. It's a lot of fun, putting amateur bakers to the test making new and challenging recipes.
My friend Deb and I were chatting recently and said how much we both would like to try to make some of the more challenging recipes they attempted. One of the most challenging ones was croissants. There is a lot of rolling, turning and folding, and tons of butter, followed by chilling, more folding and turning, etc. So we decided to try our hand at it.
Deb looked up a bunch of recipes and we ended up going with one that came out of a 1961 New York Times cookbook. We started on Thursday at her house, making the initial dough, rolling it out and adding in all the butter. Then it chilled overnight in her frig, and we picked it up again at my house the following night.
Deb arrived at our home and announced that the folded, flat bit of dough had been dubbed Charlotte. Charlotte was about to get a working over now that she was at my house. Deb continued the process of rolling, turning and folding, which is supposed to incorporate the butter through all of the layers so that when it bakes it puffs up into all those delicious flaky layers. 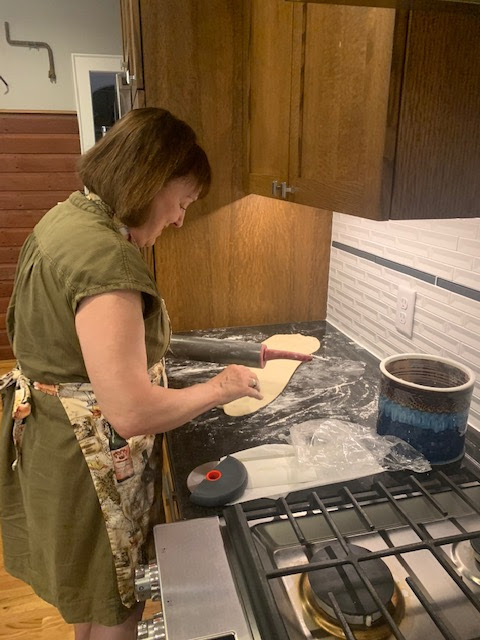 My favorite part of the recipe is when it says "cut into triangles," which I have determined is the most passive-aggressive direction ever written in a recipe. Do you have any idea how to cut 18 triangles out of a square piece of dough?I do, but only because I've purchased Pillsbury croissant dough in the past and saw how it had been scored and rolled so carefully into that little tube.
We managed to get 19 little tiny croissants out of the dough, which was supposed to make 18 croissants, so we considered that a success. We put it into the oven with the temp sent to "proof" and waited for them to rise. And waited. And waited. And they rose...a little bit. You could tell by the seams that they were indeed attempting to rise, but alas, they were not doubling in size.
After a couple of hours we heated up the oven to 425 and popped them in at their current diminutive size. Oh well.
They came out like little bread knots. No flaky layers, no puffiness. Just a solid, dense chunk of bread. They were good if you were expecting bread knots. 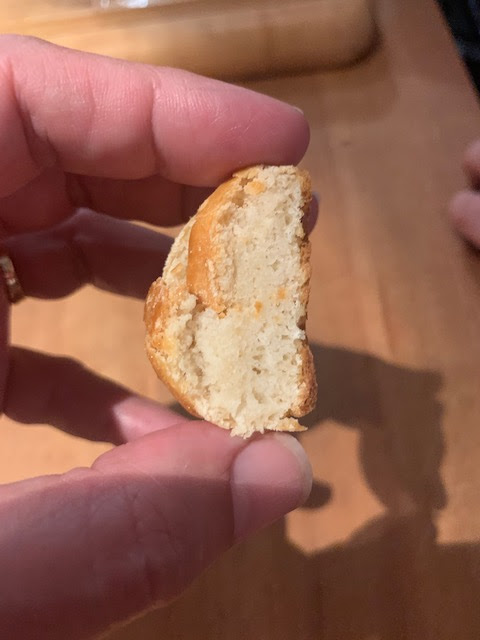 Later on I read some other recipes for croissants, all of which called for perhaps a teaspoon or tablespoon of sugar. I realized that the sugar was the "food" for the yeast. Poor Charlotte, we starved her!
I have a new appreciation every time I casually pick up a croissant from a bakery. I'm going to try a different recipe and see if I can succeed at this. It was too much fun not to do it again.
Posted by JennyF at 2:54 PM No comments:

I’ll begin with a parable by David Foster Wallace, as told in a commencement address in 2005:

This allegory, first spoken by David Foster Wallace at a commencement address in 2005, was referring to the important realities that exist all around us that are the hardest to see and talk about, that in the seemingly mundane work of “adulting,” we are choosing to make our lives important…or not important.

I would like to use the allegory to make a different statement:

All Americans are racists.

Someone first said this to me earlier this year as I attended the first of many rallies and protests in Minneapolis after the murder of George Floyd. I was taken aback and asked this person for an explanation. His short explanation? “We’re all swimming in the water.”

Our government was built on a basis of racism. When the founding fathers wrote “All men are created equal” they didn’t take “men” to mean all human beings, they truly meant all White men — women were not included in this statement, nor were Blacks or Native Americans. Women were not considered intelligent or unemotional enough to know what was best for them. The second were considered property, not capable of managing their own lives or living without a master. The third, Native Americans, were not included as belonging to the country because it was their country we would slowly annex to create our own over the next 100 years.

All subsequent systems were built out of this belief that White men were at the top of a racial and gender hierarchy. The banking system, justice system, healthcare system, the wrestling of state rights vs federal rights, all of it. It is all around us; so much so that as a White woman walking through this world, I never saw it.

In 2018, Wells Fargo was fined $3 billion for opening false accounts on behalf of its customers, taking out credit in their names falsely to “boost” reported earnings. While that was the action they were fined for, multiple cities across the United States have also sued Wells Fargo repeatedly for predatory lending practices, stating that Wells Fargo pushes BIPOC borrowers to take out riskier or more expensive loans than they should, costing many of them homeownership opportunities. Just this year the Trump administration stripped the Office of Fair Lending and Equal Opportunity of their enforcement actions, making them impotent. Moving forward, if someone believes a bank is not being fair to them on the basis of gender, race, religion or other status, there is no longer an office with any power that can help them.

Today, the United States comprises 5% of the global population but 25% of the world’s incarcerated population. Why is that? Do we really have that many criminals here in the “land of the free?” Do you know the difference between a White and a Black drug addict? A White drug addict goes to treatment — a Black drug addict goes to jail. When those White addicts end their treatment, they mostly go back about their lives, to their jobs, families and communities, while the Blacks who serve their sentence have lost some if not all of those things while they were away, and have lost the right to vote for their rest of their lives (in most states).

In 2018, when 65% of Florida voters emphatically voted “yes” to restore voting rights to convicted felons who had served their time, 33% of adult Black men seemingly had their voices restored to them. I say “seemingly” because even now, in 2020, the roll-out of this law has been stymied by a new wrinkle that now states that those felons must pay all fees and fines related to their convictions. The voice of the poor Black man is not yet being heard.

In the United States, a Black baby is twice as likely to die by its first birthday as a White baby. Research published in 2018 determined that the reason for this gap isn’t the unhealthy behavior of Black mothers, which has been considered the underlying cause for 30 years. Instead, it points to the gap in access to healthcare for Black and White mothers, institutional racism and the increased stress that Black mothers suffer living in a racist society.

We are swimming in the water. And suddenly I see it all around me.

As Angela Davis says in Ava DuVernay’s stunning documentary, 13th, “It is not enough to be a non-racist. We must become actively anti-racist.”

I am working on becoming anti-racist. It is not enough to quietly walk through this world, accepting my guaranteed freedom while they are being denied to others in my own country.

I am starting where I believe I can make the most difference — here in my own city. I am taking my lead from the voices of Black, Indigenous, People of Color (BIPOC) communities who have been telling us for years what they need to be safe, to feel the same security I feel as I move about this world. In their neighborhoods the police are a menace, harassing them and brutalizing them for decades, robbing many of their freedoms for low-level crimes that lawmakers wrote years ago for misleading purposes.

I no longer want to live in two Americas, one built for people who look like me and one built for those who don’t. I hope you’ll join me in this change.

Posted by JennyF at 9:36 AM No comments: