I wrote this post the week after Marissa's 13th birthday party, but I didn't have access to the photos from the party so I didn't post it right away. So now...four months later, here is Marissa at age 13. (Sucks being the second kid!)

This past Friday was Marissa's 13th birthday — we finally have two teens in the house.

Lindsey jokes that Marissa acts like she's been the teen for years while Lindsey still isn't. Marissa is really, REALLY into makeup. She owns more makeup at age 13 than I did as a 19-year-old during the height of 1980's glam rock. She'll spend an hour perfecting a look, only to wash it all off because we're leaving the house and she doesn't want to go out all made up.

She is into the latest pop music, like Cardi B (shudder) and Post Malone, though she sprinkles a little country like Luke Bryant and Carrie Underwood in there.

Marissa would like to live in the country when she grows up, but she doesn't want a farm. She just wants a few sheep, chickens, and some goats so her sister Lindsey will visit her.

For her birthday this year we rented a few rooms at a local hotel and had friends sleep over. They played pool games, watched movies and ate popcorn. Since they were all so tired from swimming, magically all six girls were asleep by 11:00. Wow!

The way the rooms were set up the girls had two adjoined rooms, and I had the room across the hall where I could hear if the party got out of hand. (It didn't.) The six girls stayed in those two rooms, and the first time they all left to go to the pool, not one brought a room key with them. We had to stop at the hotel front desk to get an extra one and let them back in. I personally thought it was funny and also a great example of where these girls are in their childhood; old enough that you would think they would know better, but young enough that they are accustomed to an adult always taking care of things like that for them.

She is an amazing kid whose charm and warmth engages us all. Happy Birthday, sweetie. 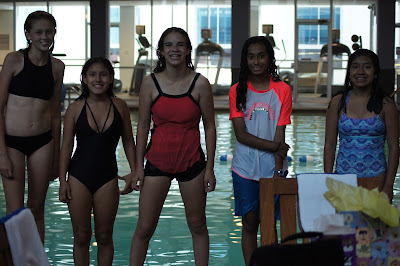 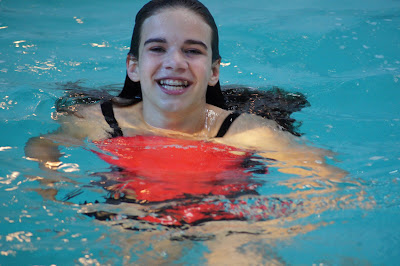 Posted by JennyF at 8:30 AM No comments: