Wanna go for a run?

My family had a dog when I was a child. I was 5 when we got him and 19 when he died.  He was pretty much my childhood dog.

He was a golden retriever named Captain and was the nicest, sweetest tempered dog. My dad wanted a golden because he wanted a hunting dog, and Captain happily obliged. They went grouse and pheasant hunting, sometimes catching the occasional rabbit.

The night before a hunting trip my dad would pull his hunting gear out of the closet, the blaze orange hat, heavy overalls, the gun in the gun case. Captain would circle him and leap for joy in his excitement. When Dad would get up at some ungodly hour Captain would already be up waiting for him -- my dad joked that Captain didn't sleep all night he was so excited to go.

This memory came to me today as Wayne was preparing to go for a run. He disappeared downstairs to stretch for 30 minutes as he always does before running. Within minutes Beauty had trotted downstairs to join him. She licked his face when he got down to her level to stretch, she circled him and leaned against him, knocking him off balance as he did one-legged squats. I finally took her upstairs so he could finish stretching in peace.

Eventually Wayne re-appeared in running gear and with her harness.

"Hey girl, wanna go for a run?" he said, and Beauty leaped for joy.

He leashed her up and off they went for 50 minutes and 7 miles. Yes, 7 miles in less than an hour, meaning they were running an average of a 7:10 pace. One of the miles they clocked a 6:30 pace, and that was when Wayne said she finally began "running" and not "trotting."

"That girl is too fast for her own good," he said when they returned, both of them hot despite the 45 degree temperature, and a little breathless.

I think Wayne has finally found someone in the family as fast as he is, and Beauty has discovered that she's a runner.

Posted by JennyF at 8:40 PM No comments:

My dad loves fart stories. He has his whole life -- he has never outgrown the idea that fart are absolutely hilarious. This trait may have been passed on to his daughters.

The other day, when dad was having a particularly bad day from the side effects of chemo, I told him the following story:

Last weekend we had our first fire in the fire place for the season. We don't know if Beauty's ever been around a fire, and she seemed quite anxious. We were accustomed to our sweet dog Dax, whose dog bed was perennially placed right in front of the fireplace, where he could be warm and cozy when a fire was roaring. 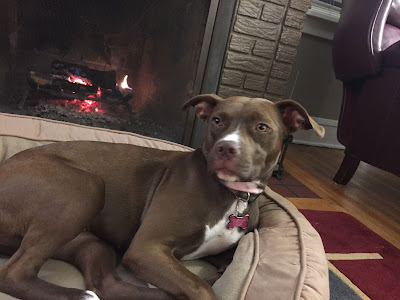 Beauty, on the other hand, was quite concerned about the fire. She did not want to go near it, even into her cozy dog bed. We pulled her bed several feet into the room, then throughout the course of the evening pulled it closer and closer to the fire, until she was finally right in front of the fire grate.

But then we learned she was not.

I was sitting in a chair right next to the fireplace, and let out quite an audible fart.

At the sound, Beauty leapt up like something bit her, her tail down, ears back. She glanced back at the fire, then scurried up the stairs.  She spent the rest of the evening sleeping on Lindsey's bed.

Clearly she believed my gas was from that ominous fire. We all laughed uproariously. Tears rolled down our cheeks and we clutched our guts in laughter.

I told this story to my dad, and he responded in kind: He dropped the phone in laughter. It was perfect. Clearly the best remedy for a day when he wasn't feeling his greatest.

I think I'll hold on to all my fart stories until the days he's not feeling well.

We have a killer on our hands. A psychokiller, to be exact.

A decimator of fluff. Of squeakers. Of yarn and string and rubber.

A toy killer, to be precise.

Wayne and I had both had forgotten what it was like to have a young dog, a playful, energetic dog who leaps, bounds and runs to her heart's content.

If we don't have squeaky toys and chew toys at hand, we must prepare to have other items chewed to satisfy her need.

Stuffed toys last approximately 2.5 days -- or an hour, depending on the quality. Wayne decided to buy an expensive "indestructible" toy, which lasted all of one evening. Fifteen dollars down the drain. Or rather, strewn across the living room carpet.

Several of the girls' stuffed animals have seen their last days, thanks to Beauty's sharp teeth.

The other evening I came home from work to find that it had snowed in our living room. A fluffy, sparse snow that covered our carpet in eclectic little pieces.


I believe that was the $15 toy. Or maybe the $7 one. I'm not quite sure which amount of money was destroyed that day.

If we don't buy toys, we need to know that other items in our house will see their end. Like her more expensive dog bed. Or a beloved stuffed animals meant for little girls.  Or the couch.

If anything, it's finally teaching the girls to pick up after themselves, unless they don't want to see their prized possessions in one piece again.

She's a killer all right.

Posted by JennyF at 9:22 PM No comments:


Our 20th anniversary date passed with a quiet dinner at home with the family. Our table was adorned with a beautiful fall bouquet of flowers and an exchange of cards. We were treated to special cards from our girls and an awesome Powerpoint that our oldest put together on the fly, celebrating our big anniversary. It was very sweet and very quiet. 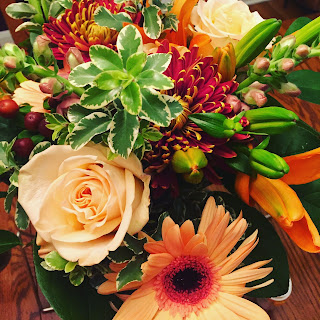 We had bigger things up our sleeves.

The following weekend we flew to Chicago in time for dinner reservations at Benny's Chop House, one of Chicago's fantastic steakhouses, walking distance from our hotel. We dressed up, I in a new autumn-orange dress, Wayne in a shirt and sports coat. Yes, he finally recently purchased his first sports coat since burgundy fabric was in style.

Our dinner was absolutely divine. We had a nice little table to ourselves; it felt like we were the only people in the place. I had a scallop with my steak which was one of the best I've ever had. We shared a side of brussel sprouts and baked potato and sipped at a bottle of cabernet.

We ended the evening with a nightcap in the bar while a songstress played the piano and crooned tunes familiar to us both.

It was so relaxing, so wonderful to go back to a hotel room that we had all to ourselves. 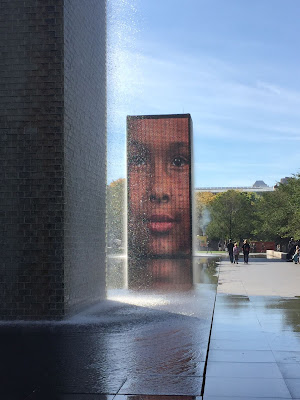 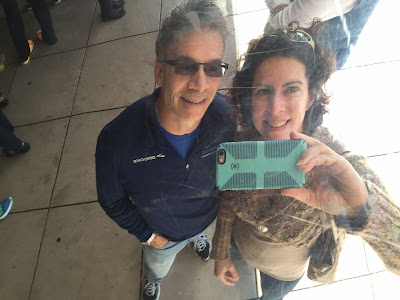 The next day we walked down to Millennium Park to check out the Bean -- I mean, Cloud Gate -- and some other art. There was also a little set up going on for a little event that was taking place Sunday morning.

We had a nice dinner at the restaurant at our hotel called Joe Fish which, ironically, was an Italian restaurant. We had their famous meatballs and some wine, then went to bed early.

Ah yes, that little event they were setting up for...the Chicago marathon.

Seriously, what couple do you know celebrate their anniversary by going to another city for one to run and the other to cheer a marathon? Just us.

Wayne left before the sun was up to get to his starting corral. There were 45,000 runners in this marathon and Wayne was concerned that he was going to be stuck in a pack of runners. Luckily, he got an ideal assignment of Corral A, just behind the elite runners, thanks to a previous marathon finish of 3:09. He had no problems breaking out of the crowd to run his own pace.

I, on the other hand, had problems seeing him. I had underestimated how big the race was. Unlike the Twin Cities marathon, where you could always count on a little break in the runners to jaunt across the course, there was no space to cross the course. The only way to get around it to see a runner at a different mile marker was to use subway tunnels or literally run along with the runners until you crossed the street, both of which I did.

I kept missing him at every mile marker. Finally I was at mile 12 well before he should have gone by. I watched the fastest runners go by, then some more, and more. I cheered, all the time scanning the crowd for him or for his familiar pace.

Suddenly my phone buzzed -- I got a text message that he had just crossed the half marathon mark, a mile down the way from me. He must've run past and I didn't see him in the crowd.

After that I gave up trying to see him and instead went to a Dunkin Donuts for some breakfast and hot coffee. I wandered back down to Millennium Park where the finish was and waited in the sunshine for the text message that would tell me he crossed the finish line. (Isn't technology wonderful?)

Wayne finished with a time of 3:38:01, another Boston qualifying time, and under his goal of 3:40. We were able to meet up at the finish and walked back to the hotel together, giving his cramping legs the stretch needed to loosen up.

He cleaned up and we had a celebratory lunch of fish n'chips and beer, then off to the airport to catch our plane. 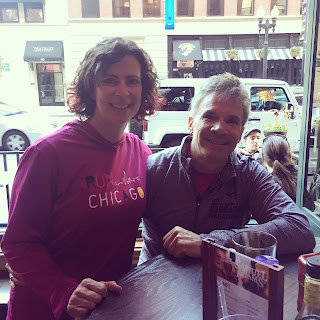 Short but sweet. A unique and fun way to celebrate 20 years together.

Posted by JennyF at 8:09 PM No comments: