What Price a Life? 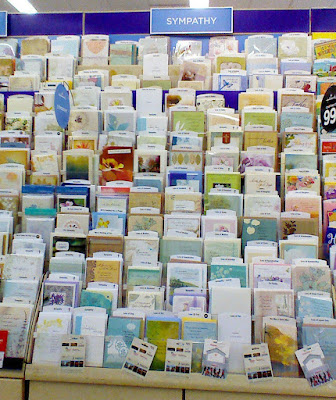 I find myself buying sympathy cards by the handful these days. My friends and I are at the stage of life in which many of our parents are passing away. Sometimes it is expected, after a long illness or decline, other times it is unexpected but not surprising when a parent leaves us.

Which leads me to the question..."What price for a life?"

Many times it is all of those things.

Do I write a memoriam gift of $25? $50? $100? In the end, does the amount really matter? Writing the check for memoriam gifts is the one check that I think about for the longest time. Will they think less of me, or more of me if I write a check of a certain amount? Do they know that this amount is a sacrifice? Do they know we can afford more?  Does it matter?

Does it matter to them?

Does it matter to the deceased?

And so I express what I can, and focus on the things that made a person happy. Treasure the memories, be grateful for the gifts of the person's presence, for the happiness and good times that were had.

At the end of the day, that is all we can bring to others.

Because no amount is ever enough.

Posted by JennyF at 6:54 PM No comments: 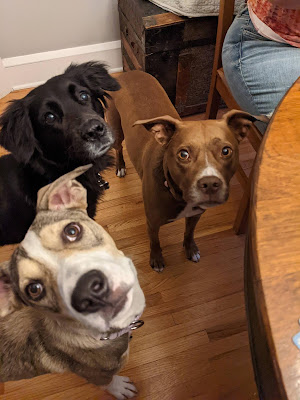 After Lindsey's freshman year of college we knew that she would get an emotional support dog to go back to school with her for year 2 and beyond. She, like many people, simply do better with loving pets in her life.

So back in March, when my friend Nicole who had rescued three street dogs from Aruba, was going on an extended diving trip, our family agreed to be a temporary foster for one of her dogs, Percy. I figured it would be a good trial run for us to see how Beauty would do with another dog in the house. Percy is a sweet, gentle Australian shepherd mix who loves to just hang with people.

Percy became a part-time pet as Kristi decided to adopt him from Nicole.Wwhen Kristi works her overnight shifts, Percy comes to our house and he and Beauty hang out. It's been fun to watch the two of them together. At first, Percy and Beauty played together a lot. Percy would lunge for or play bite Beauty's leg. Beauty HATES that, and would pull back, and it was on, with Percy trying to nibble at Beauty and Beauty trying to protect her legs from him. After a week or two of this Beauty decided she was tired of playing. So he would grab her leg and she would just stand still and wait for him to let her go.

Eventually the two of them got into a good rhythm whenever Percy would come over. Beauty taught Percy how to chase squirrels, Percy taught Beauty the finer points of enjoying food by eating slowly.

And then...Lindsey introduced Finn to the family. She had been checking the website of a rescue organization called "Adaoptabull" for a dog, had already applied and been approved to adopt through them. They texted her a photo of an adorable puppy and asked if she would be able to foster him. He was part of a litter being rescued in Texas and if they didn't have fosters lined up for them they were going to be euthanized. I didn't think that ever happened, but here it was, a text on her phone from the organization, saying "can you foster this cute puppy so he doesn't get killed?" I mean, who would say yes, go ahead and kill this adorable little thing? 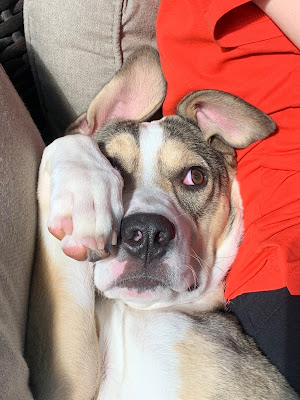 We were told Finn (then Scrappy) was a 5-month old puppy and the photo of him was of a tiny little pup. We were surprised to get a long-legged, gangly pup with a tall body and huge paws. He has no concept of personal space. His idea of snuggling with his humans is getting as close to your face as possible. He is learning to not nibble on humans, and when he wants attention he finds a random shoe, brings it to your general vicinity and looks at you, because he knows better than to chew them but still wants your attention. He trips over his own feet when he runs after balls or toys.

Beauty tolerates him with unending patience.

I tell people now that we have two and a half dogs, two who live with us and one who visits frequently. When Percy's not here it feels weird. We are always counting the dogs and thinking we are missing one. 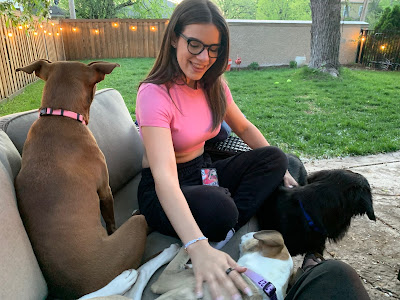