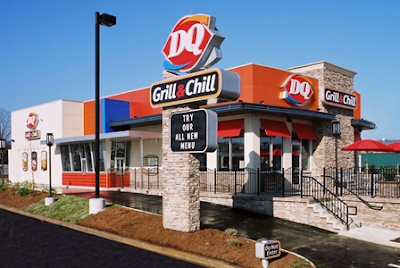 Lindsey wanted me to re-tell her the cheeseburger story the other day, even though she was there for it. Lindsey swears it's the only time she's ever heard me yell at somebody other than my immediate family.

ACTUAL conversation while going through the Dairy Queen drive through:

Incomprehensible Speaker (IS): Welcome to Dairy Queen how can I help you?

Me: Yes, I'd like a small brownie blast blizzard and...

Me: [pause] No, a small brownie blast blizzard. And I also want a small ice cream cone with chocolate dip.

IS: I have three items, a cheeseburger, a brownie blast blizzard and a small ice cream cone with chocolate dip.

Me: No, I don't want the cheeseburger.

IS: Okay, so you ONLY want the cheeseburger?

Me: [exasperated] Nooooo! I ONLY want the small brownie blast blizzard and small ice cream cone with chocolate dip!

Lindsey and I chuckle about the miscommunication as we head to the pick up window.

Person at window (PAW): Here is your brownie blast blizzard and a small ice cream cone with chocolate dip.

Me: Where's my cheeseburger?

Me: Just kidding! Ha, that was really funny. Have a great day!

For the first time in many years, our family was not in the Twin Cities for the 4th of July. I wasn't sure how I felt about that -- actually, I know how I felt, I kind of dreaded it. After all, I LOVE our city. On holidays like Independence Day I have my choice of a hundred different festivals, parades, gatherings, fireworks and other things to choose from. Sure, we usually take in just one parade, and just go to one fireworks show, but still, they are amazing.

We would be spending the 4th of July in Tracy, Minnesota, where they don't even have a parade, much less fireworks.

But what Tracy does have is family, and that trumped all those others festivities.

And, after scouring the local paper, I found that a town nearby did have a parade, and so we went. Well, Lindsey, Wayne and I went, Marissa went to the city pool with her Aunt Sherrie because that sounded like more fun than a parade to her.

We left the farm about 20 minutes before the parade was supposed to begin, parked right next to the parade route and picked a spot to stand. That was decidedly easier than going to a parade in the Twin Cities.

The parade began with a military guard carrying the American flag -- everyone who was able stood up to pay their respects. I don't remember people doing that at the Edina parade, although maybe that's because it's so crowded most people are standing up anyway.
And then came every fire truck, amublance and rescue vehicle for every small town in the surrounding area. For a while I thought the entire parade would just be emergency vehicles. The Tracy ambulance went by -- Lindsey asked if that was the one that took Grandpa to the hospital the day he died. It probably was; I think the town only has one. So she paid special attention to that one.

Floats, beauty queens, horses, antique cars and tractors slowly made their way down the road, tossing candy the entire way. Each made a turn at the end of the street and that was the end. We practically saw the entire parade again, one vehicle at a time on various streets, as we were leaving town. 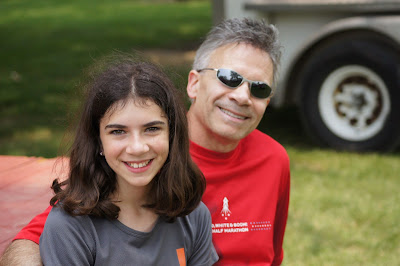 Lindsey and Wayne managed to retrieve about 2 plastic cups worth of candy, which was shared with Marissa, who was at Sherrie's house, enjoying the company of Izzy the Dog.
Later that afternoon we enjoyed a barbecue at Kathy and Dave's house. Who knew that a bunch of camping chairs in a circle could be the scene of such enjoyment?

Lindsey and I were going to go see fireworks later on (Marissa doesn't like the loud noise of them),  but got into a game of cards with Grandma and Wayne and didn't leave in time. So we turned out the lights and looked out the window, where we could catch small glimpses of them on the horizon. If we were very quiet we could almost hear them.

That was festive enough for us.
Posted by JennyF at 7:38 AM No comments: