A Measure of Justice

My city was on pins and needles this past week, waiting for the verdict of the Derek Chauvin trial.

The trial had lasted a little over three weeks. The prosecution called 38 witnesses and presented their case for 11 days. They presented data showing that George Floyd did not die of a heart attack, a heart condition or a drug overdose, he died directly as a result of Derek Chauvin's knee on his neck for more than 9 minutes.

How can you defend against that mountain of evidence? Derek's team called seven witnesses over two days to somehow defend Derek's actions. By this time Marissa was riveted to the television, watching every witness and piece of evidence.

Every time a witness came up for the defense she would say, "Funny, they don't LOOK like a racist." And then the questioning would begin, the person would speak and she'd say, "Ope, never mind, that's a racist." Because how else could you defend Derek's actions?

On Monday April 19, 2021, closing arguments were given and the jury was handed the case for deliberation. And the waiting began, the speculation that justice would not be served, that our city would explode in a fiery ball of anger and frustration. The significant National Guard presence throughout the city put everyone on edge, worrying for their safety and the future of our small business owners.

It took four days after George Floyd's murder for charges to finally be brought against Derek Chauvin. It took the jury only 10 hours to convict him of those charges.

The verdict came in at 4:06 pm on Tuesday, April 20. The girls and I sat around the TV, wrapped in blankets and clutching pillows as the charges were read. I felt a great desire to be at George Floyd Square, but did not want to move from the TV to hear the verdict.

We leaped up, hugged, and yelled "Justice!" at the TV. We took great pleasure in watching Derek Chauvin being put in handcuffs and led away. And then we piled in the car and went down to George Floyd Square, to feel the joy of those who had worked so hard for this moment.

The square was packed with more and more people coming by the minute. People greeted each other with shouts of elation, bear hugs with masked faces turned away. You could see the crinkle of people's smiling eyes over their masks. Perfect strangers spoke to each other: "It is a good day."

There was a microphone set up with a small speaker, too quiet to reach over the growing crowd. We could hear a little of what was being said, of crediting the people for keeping the pressure on, of thanking those who kept "boots on the ground" for justice. And then I heard the calls for justice for someone else, a name I had not heard yet.

"SAY HER NAME!" the speaker shouted, barely audible over the conversation and jubilation around us. Only those close enough to hear whom the speaker had been referring to responded.

I thought to myself, "Come on, let us have this moment." The people had just won a huge victory, the first White police officer successfully convicted for killing a Black man in the state of Minnesota, the first in a long line of more than 400 people who had lost their lives at the hands of the police. Just give us a moment to celebrate this before we move on to the next step in changing the system.

After we arrived home I heard about the girl whose name the speaker was calling: Ma'khia Bryant. She was a 16-year-old girl in Columbus, OH, and had called the police because teen girls were fighting in front of her house and she was scared. I'm sure the details will come out about what was happening. The police showed up and within minutes Ma'khia had been shot four times and was dead on arrival at the hospital. She was sixteen.

My heart sank. On the same day that we received a measure of justice for George Floyd, another Black child in America had lost her life to our policing practices.

The work has not ended, it is only beginning. 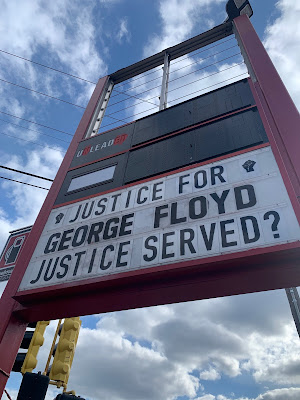